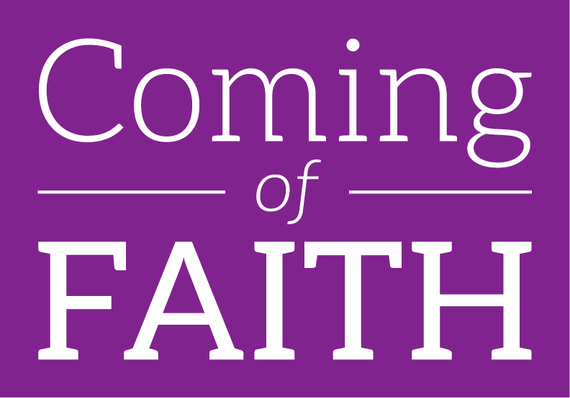 Coming of Faith believes in the power of stories. We're founded on a simple idea: minority voices deserve to be heard in an inclusive and thought provoking space. This article was originally published on Coming of Faith.

On our first date, she asked me if I believed in God.

I told her that I did, but I wasn't sure about religion.

She, too, was raised culturally Muslim. She told me that she didn't drink alcohol, that she prayed regularly, and that her relationship with God was very important to her.

I was quite surprised that we were talking about this on our first date. Both of us were comfortably "out" to our friends and were involved in social justice activism - where sexual politics are familiar topics - but I wasn't used to discussing my relationship with religion and faith in this context.

The first time that I fell in love with a woman, God was with me every step of the way.

From the moment I saw her, I thought she was adorable. There was something special about her that made me want to introduce myself to her. As soon as we started talking, we clicked. It was instantaneous and magnetic and ever since then I just wanted to be close to her. I wanted to get to know her, I wanted to spend time with her. I couldn't stop thinking about her. I didn't want to lose the feeling that I had with her - a sense of optimism and hope, excitement of what could be.

It wasn't my first time crushing on a woman, it wouldn't even be my first relationship with a woman, but there was something with her that I couldn't explain or articulate. She just got me. We understood each other in a way that I had never experienced. After only a week of knowing each other, she told me that she had never felt as comfortable with another person as she did with me.

Everything was so natural with her. I had never felt so fully understood and appreciated before - and I know how corny that sounds, but when you're in love you're corny, and I was happy to embrace my corniness, because I loved her.

Of course, I wanted her in every way that you can want someone romantically. But even when she held my hand or tucked my hair behind my ear, it felt like the most intimate thing in the world to me. I was in love with her, and I think it was mutual.

Being with her made me brave. I experienced the fullness of being loved, and the fullness of my capacity to love another person. It was a short relationship but it was incredibly meaningful to me. I thank God for bringing her into my life.

Breaking up with her was devastating. The day after, I could barely get out of bed. My heart hurt so much I didn't know what to do. I couldn't sleep on my bed because it reminded me of her. I didn't want to walk through my neighborhood because every street and every place still had her memory attached to it. What got me through the heartbreak was praying to Allah. I repeated my favorite hadith until the pain stopped : اللهُمَّ لا سَهْلَ إلا مَا جَعَلتَهُ سَهْلا وَ أنتَ تَجْعَلُ الحزْنَ إذا شِئْتَ سَهْلا "O Allah! There is nothing easy except what You make easy, and You make the difficult easy if it be Your Will"

Faith and spirituality were a huge part of this experience. I never doubted the sacredness of our relationship. Our relationship made me want to be more honest, compassionate, understanding, and generous: values that I believe are inherently Islamic. She was a good person, and being with her made me feel closer to God.

I am not going to argue about how my feelings or behavior may be judged by anyone else, but I believe that Allah is the most just, the most compassionate, the most merciful, the loving, the all-knowing.

I'm not here to give a sermon about coming to terms with my sexuality. I've been aware of my potential attraction to women as long as I can remember. I can't point to a moment in time where everything changed and I realized "oh, I'm queer!" but I remember when I was about twelve I became more cognizant of my attraction to boys, and then I realized that the feelings I had towards some girls was the same as that.

I tried to convince myself that the bi-curious thing was a phase. Of course you like her, she's beautiful and kind! It doesn't mean you're into girls! Well, it's been over ten years and the phase hasn't passed.

Sometimes even now it's hard to draw the line between "wow she's a lovely human being - I admire her and want to spend lots of time with her" and "I really want to be her girlfriend." I think most heterosexual women have experienced the former.

Religion and culture have always been intertwined for me. I could never give up my religion, as it would mean losing my culture and my family too. I would never want to make that sacrifice. I don't need to be "out" to my family or community for me to feel like I am being true to myself. I think the insistence or focus on being "out" reflects an individualistic, Eurocentric paradigm. I accept myself as I am, and I believe that God does too - that's what is important to me.

I am Muslim. I identify as such because that's what makes me feel safe and whole. I have issues with the way our religion has been interpreted and practiced by many, but I believe that my relationship with God is what truly matters. I frankly don't care what any imam or scholar says about how queer people "fit in" in Islam, whether there is a space for us, or whatever texts may or may not apply to us. My space in Islam is established by virtue of my existence. I am Muslim, so Islam has a space for me. My relationship with God and my sexuality are not at odds with one another. As far as I am concerned, there is no conflict.

Like everyone else, I am in a constant process of evolving and trying to better myself. I think we should learn and grow from our experiences, and my relationship with her made me grow as a person and as a Muslim. I know that Allah is with me and will guide me through my life and my relationships, regardless of the gender of my partner.

Mithleya is a queer, desi, Muslim, cis-woman living in North America. Queer is an umbrella term for sexual and gender minorities that are not heterosexual, or gender-binary. Mithleya identifies as queer because she finds this an inclusive term for her romantic and sexual preferences. She defines her queer identity as a potential sexual, romantic, or emotional attraction towards a person of any sex or gender identity.