When creators Ron Cowen and Daniel Lipman decided to adapt the British "Queer As Folk" for Showtime they knew they had to had a lot to live up to. "We made a pact that we had to at least match or exceed it," Liman said at the show's mini reunion at ATX on Friday. "I think in many ways we exceeded it ... in terms of the graphic nature."

During the panel, the cast -- including Peter Paige (Emmett), Gale Harold (Brian), Randy Harrison (Justin) and Robert Gant (Ben) -- talked through their initial reactions to the extremity of the show, which they were first introduced to in the form of a massive contract stipulating they would definitely be getting naked.

"The day of the screen test they sent over -- and I'm not making this number up -- a 21-page nudity rider," said Paige, who had only done nudity once before. "There were two pages that were the actual rider that said, 'This is the the kind of show this is. If you are not down to do this, don't take this job.' And then it had 19 pages of the script attached, which were all just ass fucking."

Once the laughter died down, Paige looked over to Cowen and Lipman. "They didn't want us not to do it," he said. "You guys were, like, 'Basically, even if your character isn't getting laid in this episode, you're going to be. Which I took as a bonus!"

After seeing the rider, his manager told him not to take on the role. But Paige insisted he needed to be a part of "Queer As Folk," regardless of what it would do to his career.

"I remember vividly waking up in the morning and going, 'I'll kill myself if I have to watch somebody else do this show,'" he said.

Showtime loved how edgy the series was right from the start, but the sex scenes on "Queer As Folk" were never meant for pure shock value.

"The sex was really not gratuitous," Cowen said. "This had never been done in a show before. Ever. So, for us, we thought of it as arias, like in opera when language ceases to express, people start to sing. The same happened with sex. You can express so much with sex."

At first, all the nudity was a learning curve for everyone. "We tried to make the actors comfortable," Cowen said. "No one was allowed on set ... when the actors had a sex scene, no one was there except the people who absolutely needed to be there." Things eventually got a bit more comfortable, but the actors always had the opportunity to watch those scenes and decide if they wanted certain parts cut.

"It was weird, it took a while for us to figure out cock socks," Harrison added, with a smirk that would make Sunshine proud. "In early scenes we were, like, spirit-gumming fabric onto ourselves ... It really took a season before we figured out cock socks." 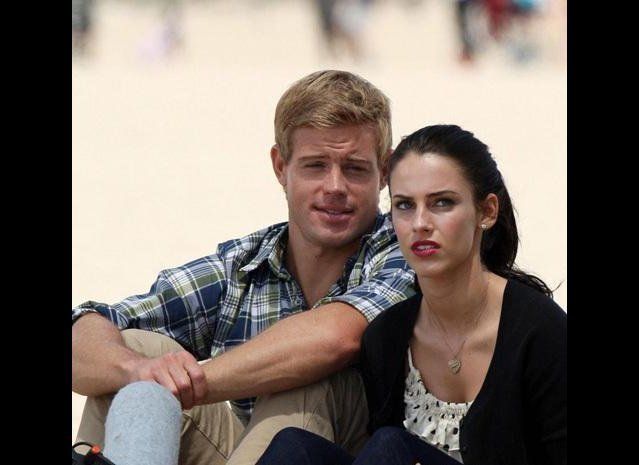 1 / 18
Teddy And Adrianna, '90210,' CW
Teddy (Trevor Donovan) has been something of a womanizer until this point in the teen drama's history. In the third season, though, the producers of "90210" have announced that he will come out. He will join Adrianna, who has already explored her bisexuality.
CW