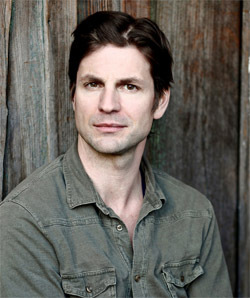 Gale Harold, best known as Brian Kinney from Showtime's Queer as Folk, has also appeared in numerous plays, films and television series such as Desperate Housewives and The Secret Circle. Watch for his latest film, currently in production, called The Being Experience. Photo by Robert E. Beckwith.

Gale Harold of Queer as Folk weighed in on what was once the most controversial character to portray.

Ilana Rapp: You gave us quite a scare when you had your motorcycle accident during your Desperate Housewives run. Has the accident changed you regarding how you feel about life and your career?

Gale Harold: The accident was a definite mortality check. Afterwards I had to re-think life from almost every angle. I learned how lucky I am not only to be alive, but to be surrounded by the wonderful people in my life who came to my side, looked after me and gave me an anchor to rely on. Their presence was fundamental in my recovery not only physically but psychologically. The places I went to were the worst and most terrifying I've ever experienced. I really believe that seeing the faces and hearing the voices of these people made it possible for me to find a way out of the darkness. They helped me find faith. Religion hasn't been a part of my life for a long time, if ever, but I do have a new found appreciation of the principle of faith. Some say that Jesus is the rock, or the anchor. I say that your friends and family are your anchor. And you can REALLY hold their hands, not just sing about it. No disrespect to George Jones.

IR: How many motorcycles do you have and what makes/models?

GH: I have a few. All Italian. My favorite? It's a tie between two Ducatis. A 1973 750 GT with right side shift, and a 1978 900 Sport Darmah set up like an SS. My Darmah has a four leaf clover on the keychain. That's all the good luck I get. I ride with my good friend Hugo and a Scottish genius named Leif Lewis who I rely on to look after all the serious work my motos need.

IR: You came to acting when you were close to 30 years old due to the persuasion of one of your friends. At what point did you realize this is what you wanted to do as a career?

GH: I started studying at 26. Before that I never thought of acting as something that I would ever try. I had screwed around with some bizarre 'performances' that I filmed on Super 8 for a film class I was taking at SFAI, but the pieces were super raw and primitive. After I began to explore what an actor actually is, I studied for three years before I had the guts to go on an audition. Pure terror. That's one moment I'd like to experience again. An acting career? Many days it feels like I'm in an extended existential experiment. I feel blessed and very fortunate, but a lot of my dreams continue to evade me...

IR: How did you get your first agent and/or manager representation?

GH: My first manager, Suzanne DeWalt, saw a play I was in. She was invited by the director Joan Scheckel, who was my first real acting teacher. Joan was also good friends with my friend Susie Landau Finch who had first encouraged me to consider acting, so that's how I began studying.

IR: What was the audition like for Queer As Folk?

GH: When that audition happened, I had already decided to leave Los Angeles. I hadn't decided where I was headed but it was going to be either Chicago or New York. I couldn't decide which because I had $5 to my name. The cart was definitely before the horse. I had no reservations about the part. I had reservations about auditioning. I was slightly traumatized by my 99 percent record of rejection. I had been cast in one part. That film was a blast, but I was still trying to toughen up to survive the brutality of the other 99 percent. I didn't believe I'd ever get another job in front of a camera, and wanted to figure out if I could cut it on stage in New York or Chicago. At the audition I read from sides for Linda Lowy, the casting director, and I read with her associate John Brace. I had seen the original on a VHS tape my girlfriend had. I thought Aiden Gillen was a total badass, but didn't think it would ever work as an American adaptation. Anyway, I'd vowed this would be my last Los Angeles audition. Apparently it went well. There were a series of callbacks which required a haircut (I think), and the purchase of a suit I couldn't afford. The callback and test process was a nail-biter. The strangeness of performing in a boardroom environment surrounded by executives was so intense I might as well have been walking through a remake of the video for "Ashes to Ashes" by David Bowie. And that was only slightly less bizarre than an actor who was testing for the character of Michael telling me he wasn't going to kiss me just before we went into the room. Had he even read the scene? We'll never know...

IR: Once you had the part, what type of research did you do to portray the selfish, gay Brian Kinney?

GH: I had enough gay friends to have taken a few spins through the happy bars of San Francisco (where I lived for almost nine years) and Los Angeles. And I grew up in Atlanta. I'd worked and lived in mid-town for a few years, so a lot of the 'social' research was already done. My take on Brian was foremost one of free will. It seemed to me that the most direct way to find him was to underplay all the cliches. He simply wanted men and believed he was right. He had no need to question himself. Of course those were my angles. How he came across was the result of those choices I made blended with the way the part was written, shot and edited. I kept returning to my belief that his sexuality was not up for debate by anyone, himself included. That was very freeing, and it inspired me to deflect all speculation about my own sexuality. I'm straight, but the character was too important to me to muddle his world with my private life. As a nobody, I got away with that deflection. I think it may have helped to introduce Brian as a believable gay man. Maybe not. However it played, it's been out of my hands for a long time.

IR: Brian Kinney was a very strong character to bring to American television at the time. Did you have any fears or thoughts that people around the globe would say you're not properly portraying a gay man?

GH: Hell no! Well, I say that now with the benefit of hindsight. Seriously, at the time I was just a naive hetero thinking that all gay men would slap me on the back and say "right on. I was basically unfazed by gay culture as I understood it. But I hadn't even scratched the surface of what it means to grow up and survive being gay in America. In the 13 years since QAF hit America, much has changed. Thank goodness for that. But honestly, I was not prepared for the affect that role would have. I probably thought that because I was a serious devotee of Burroughs, and Cocteau and Genet, I had a deep understanding of gay culture. I wasn't even close! And I definitely wasn't prepared for the backlash I got from those who saw me as an unwelcome trespasser.

IR: Did you at any point feel uncomfortable when having such intimate scenes with other men?


GH: Revealing yourself, physically or emotionally, to cast and crew is frequently uncomfortable. But it is essential if you want to to tell the truth. I felt more at ease being bold with some than I did with others. I was incredibly fortunate to have worked with Randy Harrison as Justin Taylor. We share enough taste in music and art to have had a real camaraderie, and luckily that evolved into a deep friendship.

IR: What's your advice to actors who will be doing same-sex scenes for the first time?

GH: Tricky question. I'm no expert. All I can say is that if you are fortunate enough to be playing a character who is developed enough that you can mine his or her identity-which isn't always the case-decide what or how the character behaves before and after sex. Basic. And then be yourself. Kiss well and passionately (if that makes sense), and move like you mean it!

This piece originally ran on NYCastings.