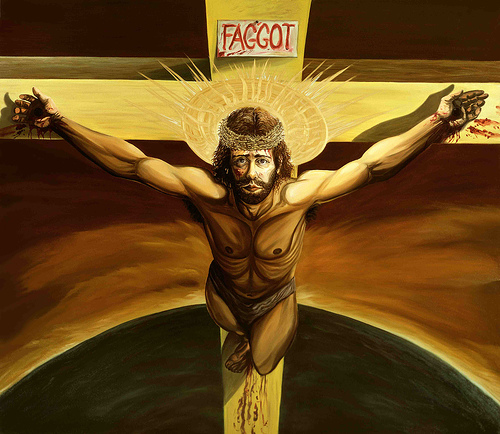 "The Crucifixion of the Christ" by Becki Jayne Harrelson

Visions of a queer Christ are on the rise as Easter approaches this year -- because the conventional Jesus is no longer enough. Christ's story is for everyone, but lesbian, gay, bisexual, and transgender (LGBT) people get excluded when conservatives use Christian rhetoric to justify hate and discrimination.

Every community presents Jesus in their own way. There is black Jesus, Asian Jesus, female "Christa" -- and now queer Jesus to set people free and heal some of the damage done in Christ's name. Many, including me, see the queer Christ Jesus as a blessing that builds faith by embodying God's wildly inclusive love for all. Others attack our ideas as blasphemy.

The debate is usually framed as freedom of speech (for LGBT people) vs. freedom of religion (for conservative Christians). But LGBT Christians also have a right to religious freedom. We refuse to concede Jesus to people who act like they own the copyright on Christ, then use him as a weapon to dominate others.

Nobody knows for sure whether the historical Jesus was attracted to other men or felt like he was female inside. Some progressive Bible scholars do argue that Jesus had a homosexual relationship. Chicago Theological Seminary professor Theodore Jennings presents the most fully developed explanation in his book The Man Jesus Loved.

Queer Christ images are emerging now in theology books, at art galleries, on stage, in churches, and across the World Wide Web. I specialize in covering the growing number of queer Christ projects through the Jesus in Love Blog on LGBT Spirituality and the Arts. Some new examples of the trend are:

Perhaps the single most powerful queer Christian image is still "The Crucifixion of the Christ" (above), known informally as the "faggot crucifixion." Atlanta artist Becki Jayne Harrelson painted it 19 years ago in 1993. The sign on the cross usually reads "king of the Jews," a phrase used to mock Jesus in the Gospels. In Harrelson's crucifixion the sign screams "faggot."

She painted the stunning, life-sized crucifixion through a steady stream of tears over human cruelty. "Look at the word 'faggot' on the cross. You could substitute the word 'nigger,' 'Jew boy,' 'honkie,' 'redneck' or 'bitch' -- it all means the same," she explained.

Whenever anyone commits violence against another, Christ is crucified -- including when LGBT people are attacked or killed for loving someone of the same sex. The crucifixion remains the most common queer Christian theme. Many LGBT people can relate to the hurt and humiliation that Jesus experienced on the cross. Traditional iconography such as the Passion and the Stations of the Cross has been adapted to address queer suffering.

A monumental yet accessible exploration of Jesus' arrest, trial, crucifixion, and resurrection is The Passion of Christ: A Gay Vision by New York artist Douglas Blanchard. His 24-panel series shows a gay Jesus in modern dress in a contemporary city. Jesus is jeered by fundamentalists, tortured by Marine lookalikes, and rises again to enjoy homoerotic moments with God and friends. The popular series is running in daily installments during Holy Week now through Easter at the Jesus in Love Blog. 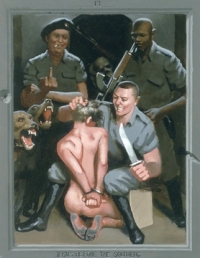 "Jesus Before the Soldiers" by Douglas Blanchard, from The Passion of Christ: A Gay Vision

Those who dare to present Christ as queer have had their work protested or destroyed -- if they can find a way to exhibit it at all. Some have faced censorship, controversy, hate mail, violence, and death threats. For example, one opponent took an ax to gay Jesus photos by Elisabeth Ohlson Wallin of Sweden. Another vandalized the St. Louis office of theologian Robert Goss, spraying "faggot" on his door and stuffing rotten meat into his book about a queer Christ, Jesus Acted Up. In San Francisco vandals smashed Alex Donis' painting of Jesus kissing a male Hindu god. I tell the stories behind some of these hate crimes in my book Art That Dares: Gay Jesus, Woman Christ, and More, which features 11 contemporary artists from the U.S. and Europe. The most vicious attacks come from the religious right, but both sides express disapproval. The queer Christ is too gay for most Christians but too Christian for most of the LGBT community.

We are in good company. Jesus himself was charged with blasphemy. The Jesus of scripture befriended prostitutes, lepers, and other outcasts. He challenged traditional family values at almost every turn, ignoring his blood relatives in favor of those who became his "brothers and sisters" by loving God and neighbor. He taught love and justice and was killed for it.

I first discovered the wealth of gay Jesus art in 2005 when I began looking for images to go on a website announcing my novel Jesus in Love, a fictional autobiography of a queer Christ. I was amazed to discover that while I was writing my novel, people all over the world were also portraying a gay Jesus. When I displayed some of the new images on JesusInLove.org, the powerful response led me to keep writing about the queer Christ.

Being human, Jesus must have had sexual feelings. Being divine, Christ lives in every individual of every different shade of sexual orientation and gender identity. LGBT-positive Christian images are needed now because of the ongoing homophobia in the church, but I have come to the conclusion that the queer Christ images are more than a reaction. They are a revelation.