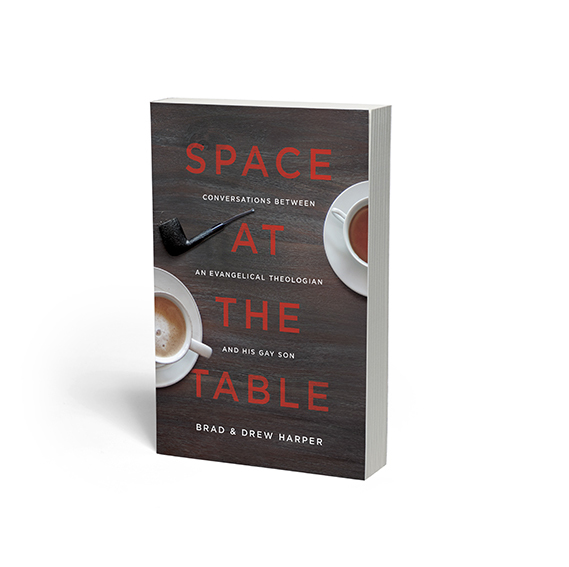 Two years ago my father, professor at an evangelical christian college, sent me, his queer-as-folk son, a pitch. What emerged a year later was Space At The Table: Conversations Between an Evangelical Theologian and His Gay Son. Now I'm on a road trip through California, land of my parents' past. In the places they told me of but never took me to --Tahoe, Yosemite, Big Sur -- I'm creating memories for the places of family legend. It's been a year of considering my heritage.

After I came out the message of evangelical America had been unequivocal: You don't belong here anymore. Unfit, unclean, I left the years of christian ex-gay conversion therapy and took off to New York in search of a language and community from which I would never be excommunicated. And yet my father, orthodox as ever but full of love for his gay son, left the door open to relationship.What grew out of that struggle was our book.

There's a scene in the film adaptation of Chaim Potok's The Chosen, where Hasidic Rabbi Saunders (played to perfection by Rod Steiger) must confront the fact that in the zeal for his religious orthodoxy, he has caused his son tremendous pain. The many references my Dad made to Potek's book during the writing of ours spoke to me of how this, for him, was the most difficult part of telling our story: Dad had to face the fact that he had been the source of trauma for his beloved son.

My own struggles were different.

What I struggled with was feeling like a traitor to queer values. A lackey in the service of oppressive ideology. I sometimes had the feeling that I should be dragged through the streets of Chelsea or West Hollywood to withering "Boo!"s á la Buttercup's nightmare in The Princess Bride.

There was a painfully bifurcated consciousness required in writing this book.
As a socio-political project, Space at The Table had to be something which conservative parents would not just buy, but finish. My contribution to the book needed to challenge them by a calculus that disrupted their comfort as far as possible without causing them to walk away. This balancing act was taxing. In 2014, when dad pitched me, I had finally achieved a healthy life. This project felt like a sure-fire way to undo that. I wondered how I would write something whose success would demand self-censorship at every turn, and still respect myself as an artist and a queer man?

I eventually accepted that the conciliatory tone I used in the book was a necessary part of reaching the edges of our demographic. No gay kids from evangelical families would be helped if my words made conservative parents slam the book shut. It was a lesson in realpolitik. But at some point along the way I started going to church, and that's when shit got weird.

At first, my reentry was pragmatic -- strictly research. But then I started making friends with these Christians. It was disconcerting.

Then there was attending the GCN -- that's the "Gay Christian Network," and no I am not making this up -- which just happened to be having its national conference in my hometown that year. This queer bible-thumping extravaganza felt like a superfab version of my childhood megachurch, complete with a stage full of lesbians stroking out familiar evangelical chord progressions. This left me in a panic. I was not okay with how at home I felt in that environment (picture Saved! meets Hairspray! directed by Steven Curtis Chapman). And yet I had a blast.

Around halfway through the book writing process I started to experiement with Christian-ese. I was careful to only speak it ironically. In a Paula Dean accent. Prayz Heeyum, Howleluyuh, Aymeyn. When I roll with my little brother and other post-evangelical homeboys who are fornicating or homosexualizing, we'll ask each other with syrupy sincerity "how's your walk, bro?" and if we get drunk, the guitars come out and someone does a mock alter call, inviting sinners to confess and be redeemed. But then once, when the book was near completion, I was on my father's evangelical campus and the barista told me how her husband had recovered from a paralyzing illness. I blurted "God is Good!" out loud, with total sincerity, then had to excuse myself to have a breakdown in the men's bathroom. I sought healing shortly after via a John Waters film.

I have found, since writing this book, an unexpected comfort in being around evangelical christians and their language. My old language. There is such a shorthand between us that the world can be easily engaged through shop talk. The village dialect.

I'm not sure. What I know is that after this book, the message of American evangelicalism for me has shifted. No longer "You don't belong here," it's now more like "keep coming back. It works if you work it. And really, it's yours to work." So I've given myself permission to imagine queer futures undiminished by the fact that they might be evangelical futures as well -- I'm talking about going to Sunday School, bringing my kids to family camp in Tahoe, singing the church songs I knew as a kid.

Our book debuted in February, and the response has been great. At readings, the Christians and the gays laugh together, which pleases me, and then they cry together in the book-singing line, which pleases my sentimental father. The letters we have received from parents and children leave me speechless.

I FaceTimed my dad this morning. I wanted to tell him about this road trip through his memories.

"Oh, Lake Tahoe! You gotta go to Emerald Bay. At church camp, my buddies and I would go diving for crawdads in Emerald Bay. Tasted so good sautéed in butter and mushrooms."

This is the California of my parents. Of Calvary Chapel and the Jesus Movement of the 1970s. My parents met Jesus here, and whatever the hell that was it was theirs, and now its mine -- should I want any part of it.

The water here is clear and soft. The sun lights up mountains that sing of a Creator but don't demand theology. I think my future kids and husband would love it here.

Author of Space at The Table: Conversations Between an Evangelical Theologian and HIs Gay Son; Portland, NYC, Los Angeles, Cairo