It seemed like any other innocuous argument between my parents:

My mother was lying in bed in an attempt to read a book to my little sister. Dad was standing over them. I entered the room for some reason and stood observing their bickering as it reached a crescendo.

"And these men you have been staying out late at night with, they're gay, aren't they?" my mother asked him.

"Yes they are," my father answered.

"And you're gay too, aren't you?" There was a short pause and then dad stated in a rather matter of fact manner.

I walked out of the room, shook my head and laughed to myself, more than a little confused.

"Great -- dad's gay," I muttered sarcastically. Dad came freshly out of the closet and into the doorway of my room.

"Can I borrow five dollars for petrol?" he asked. I nodded silently and retrieved five dollars from my secret stash of money I hid under a ledge in an ancient radiogram. I stood there understanding nothing, listened as the car tires gripped the driveway as my suddenly gay dad drove off into the night to play with his secret friends.

I didn't understand what gay was, but my O.C.D -- hitherto unconcerned with accuracy of information -- kicked into high gear with graphic sexual images. I was gripped with an irrational belief that you could instantly turn gay. I made myself sick with the thought that I might turn gay. I didn't understand that sexuality doesn't suddenly change.

As a result, I became wary of all things gay -- my father's sexuality was a topic of intense embarrassment.

"Is your dad still gay?" my childhood friend's little sister asked at a crowded dinner table a few months after my parents separated.

An awkward silence enveloped the room.

"Yes, I think so," I said sheepishly, ashamed.

I slipped into a depression. I had no help from therapy or medication and was imprisoned in a mind that was not user friendly. I thought this was normal. I thought this was just one of life's trials. And though I didn't see any light at the end of the tunnel, I did hope that one day my mind would find some peace.

I made some gay friends in college, but I still had no good understanding of gay culture apart from the incredibly strange men my father chose to partner with. I did get help for my mental health, I was straight and secure in my sexuality, but I still held fears of the gay community. So, being impulsive, I decided to face my fears.

I did this by jumping on a go go box in various gay clubs in Los Angeles.

I wasn't always comfortable, but it was often hilarious and the best thing about it was the deep and lasting friendships I developed. As such, my gay friends have become an inspiration -- for one thing, my gay friends and clients have a work ethic that is astounding.

After a hard day at the office, they workout like men possessed. As a personal trainer, it is a privilege to work with gay people. I often take a few proud breaths after a workout session and beam with amazement at my gay clients' tenacity and spirit. 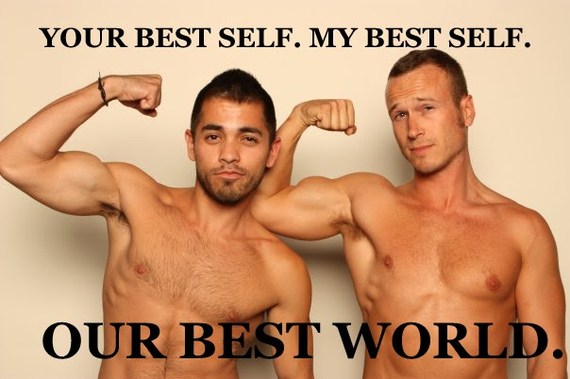 Me with my dear and inspiring friend Moses who became like a brother to me. I met him on a go go stage.

More importantly, having gay friends has made me more sensitive and aware to the importance of the fight for human rights. I volunteered as part of the "No On Prop 8" campaign. I rode in a couple of Aidslifecycle rides and ran a marathon for the APLA.

Being part of a community that fights for what is right and the well being of those less fortunate opened my heart and mind to a deep and powerful sense of justice -- human beings fighting for the sort of dignity and respect and love that we all deserve is a cause that has grown within me and given me a more profound outlook on the purpose of my life.

I have been touched by the gay community (I gave you that one).

Imagine living in denial of your essential impulses and repressing your true desires? Coming out takes courage and is often a painful process. Hearing my friends stories and reflecting on my father's repression of his own sexuality made me more empathetic and appreciative to both the struggle and the bravery involved in standing in their truth.

It has been a wonderful expression of societal evolution watching the cause for marriage equality ripple across the surface of American life.

Sexuality isn't a choice, it is a blessing. I'm glad my father came out and I'm proud of him for it. I love that he is gay, it is one of my favorite things about him.

It is our character that defines us. It is how we come out of our personal storms that reveal our inner beauty. My attitude has evolved due to my immersion in the gay community. By facing my own prejudices and mental dysfunction, it has deepened my awareness of the human condition and taught me to appreciate the different colors, the beautifully rich and generous colors, I had heretofore been colorblind to. The rainbow of society I now see is more vivid, magical and true.

The rainbow of gay rights arcs proudly across our communal sky and calls for us all to appreciate the undeniable beauty that is our species awe inspiring diversity. Gay people are an integral, inspiring and empowering force in our cultural rainbow and profoundly enrich our collective skies. The more they come out, the more radiant and vibrant our civilizations horizon will be.