On a street corner of midtown Manhattan, in as discreet a location as far away from the eyes of the NYPD as possible, a group of people gathered on March 1, around a large 50-yard-long bunch of yellow cloth, waiting for the signal. The "walk" sign flashed "go", hands clutched swaths of banner and soon the group's message became more clear with every LGBT activist's step into the crosswalk: "NY... DEMANDS... MARRIAGE... EQUALITY..." Pretty soon, MTA busses were stopped in their tracks. Honking and shouting ensued. Cops started breaking fierce Drag Queens' manicured nails as they cuffed them and pushed them in the waiting paddywagon. 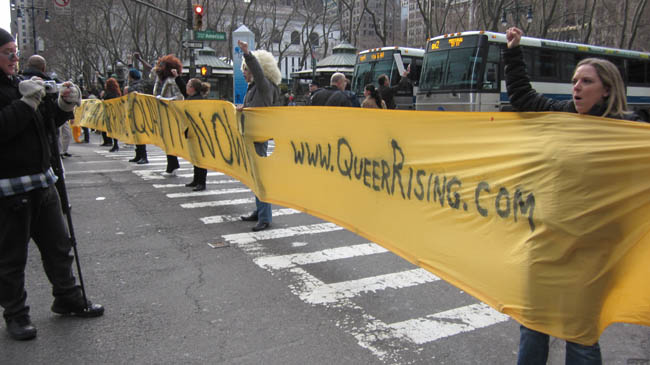 The hodge-podge membership of Queer Rising had been at this place before -- square one. The emerging activist group started its endeavor to win legalized gay marriage in New York in December 2009 -- after the last time the New York State legislature voted down the measure -- by crashing the Christmas party of Hiram "Slasher" Monserrate, a former New York state senator who was vocal about his opposition to gay marriage. The group followed its Monserrate action two months later with a 2010 Valentine's Day protest in which four members chained themselves to the entrance of the New York City clerk's office after unsuspecting staffers refused to issue four couples a marriage license. However, as marriage went backburner amidst the gubernatorial campaign, Queer Rising spent its spring chasing down New York archbishop Timothy Dolan for his open stances degrading gay marriage and its summer vacations in D.C., chained to the White House gate -- then to each other in a DC jail -- until Don't Ask, Don't Tell was repealed last fall. The group wrapped up its year with a "Die In" at Grand Central Terminal to highlight the travesty of gay teen suicide.

But with the election of Andrew Cuomo and a tri-state outcry, gay marriage is back on the table in Albany. Yet, despite the involvement and money of the LGBT lobbyists, including the omnipresent Human Rights Campaign, the National Gay and Lesbian Task Force and the Freedom to Marry Coalition, the marriage tit-for-tat continues in Albany. Queer Rising has taken the Robert Moses approach: cutting off major arteries of traffic until it gets what it wants.

Some see taking the movement back to its Stonewall roots as antithetical to its forward strides to the capitol, while the proponents of gay "power to the people" believe the lobbyist action has moved gays one step forward and ten steps back. But since the institution of Proposition 8 in California and the political melee of DADT, the gay community at large has begun to question the high salaries, the lavish headquarters and the sums of money filtering from organizations' pockets into the campaigns of state and federal legislators who subsequently vote against LGBT causes.

In the spirit of both Stonewall and of Michael Rogers -- the independent blogger who single-handedly brought down several gay and lesbian congressmen and Capitol Hill staffers in his effort to oppose the 2004 Federal Marriage Amendment -- gay guerrilla groups have started popping up all over the nation, challenging the LGBT status quo and demanding the end of inaction.   At the forefront of this movement stands Queer Rising, a New York City group founded as the result of a sign posted in the lobby of the city's LGBT community center asking one simple question: are there any gays outraged by the LGBT lobbyists' inaction? As it turned out, yes, there were. Lots of them.

"Legislators have been taking campaign money from the gay political groups, pledging their support and then reneging," said a Queer Rising member, who cited New York State Senator Joseph Addabbo for accepting $500,000 from gay PACs and being one of the first New York City councilors to vote down the Marriage Equality bill in 2009. "Something is not working. That's not support; that is benefiting on the backs of gay people."

There are now less than two weeks left to pass a marriage bill in New York, and the street groups are pulling out all the stop signs, the political statements and the funds for bail until Governor Andrew Cuomo agrees to bring same-sex marriage before the Republican-controlled Senate, whether he has the votes or not. "Cuomo's support for marriage equality is appearing more to be a political stunt than an act of commitment to do the right thing," Queer Rising's Natasha Dillon told the Wall Street Journal in May. "The governor has not done the lobbying necessary to change votes. He had misled New Yorkers into believing that passage of marriage equality was going to happen this year and now is backtracking."

Dillon, who has been arrested six times in the past year -- including for the two crosswalk stunts at Sixth Avenue and 42nd Street -- remains at the ready. If the vote hasn't happened by June 14th, she says, Queer Rising will be at Cuomo's pride month fundraiser at Priscilla. "Everything we do is all dependent on what goes down. I'm plugged in daily to see how things change.

"I think that all hands on deck is important at the point. The HRC, Queer Rising, the governor, every person that wants to see equality happen in this state, and then everybody else," Dillon said. "Clearly, HRC plays a role in this, as does Queer Rising. Ignoring that fact is ineffective. Everyone should do what they do best, but do it better."