Blatantly advocating for anything inside the mainstream Hollywood paradigm is no easy task, so Angela Robinson, who champions gay rights while also charming audiences who enjoy pure entertainment, is like a superhero. Currently a writer and executive producer for the hit TV show True Blood, she also wrote and directed the film D.E.B.S. and TV shows The L Word and Hung. Generally carrying strong political statements, the stories she creates still manage to remain fun, sexy, and action-packed, thus appealing to a broad audience. As a True Blood fan, I was really excited to learn more about her experiences working in television.

Natalia Leite: Angela, how did you start writing and directing for television?

Angela Robinson: My first job in TV was kind of a confluence of events. I made a short film of D.E.B.S. that was seen by Ilene Chaiken (the creator of The L Word) and Larry Kennar (one of the executive producers), and at the time they were looking for a "funny lesbian" to round out the writer's room of the first season of The L Word. Larry was also a manager and wanted to represent me, and I told him I would sign with him if he got me a job. A week later I was meeting with Ilene. I didn't have a television sample, but she gave me the job anyway because they wanted another lesbian in the room, presumably to pitch stories and lend authenticity. (I always tell people who want to write for TV to go be a cop, lawyer, or doctor first and they'll always be employed, but in this case the expertise they were looking for was being a lesbian.) Also, I think it really helped that I knew Rose Troche (who had directed the pilot of The L Word) and Guinevere Turner (who was also a writer in the room) from New York, and they vouched for me. There was a whole scene in the mid-'90s of lesbian filmmakers and producers in New York who were friends or knew each other: Rose Troche, Guinevere Turner, Jamie Babbit, Andrea Sperling, Lisa Cholodenko, Kimberly Pierce, to name a few. We all eventually gravitated to Los Angeles (and a bunch to TV).

Leite: That's pretty awesome that you had this community of gay women working together. It really helps to have that support early on. When your career was first taking off, were you worried about how being openly gay would affect your success in the mainstream?

Robinson: At the start of my career, I wasn't really worried that being openly gay would affect my career; I just kind of went with it, because for me it wasn't really an option. I suppose there were some lesbians I knew that could pass for straight, but I was never really one of them. And I had a really specific political goal that I had articulated to myself and others, which was to try to insert gay themes and characters into mainstream Hollywood fare, which is pretty much what I've done for the last decade, with a few exceptions. I felt (and still do) that was the most useful and powerful way that I could contribute to advancing the cause of gay rights, which was (and still is) very important to me. So I pretty much "leaned in" to the gay of it all.

Strangely, I feel like being an out lesbian in Hollywood has actually helped me. I feel like there is a ton of misogyny in Hollywood, and that many men (which is primarily who you're dealing with) -- not all, but some -- have a tendency to group women into the category of either "girlfriend" or "mother." They can't get out of these two ways of thinking. But when you're a lesbian and the whole potential of sex is kind of taken off the table, it's not even an issue; it kind of clears the air, and then they can just approach you as a collaborator. Also, there is a really amazing and supportive LGBT community in Hollywood. I owe most of my career to gay people who have supported me and helped me advance, given me jobs, etc. My experiences have been almost universally positive.

Leite: That's really good to hear. True Blood features a vast variety of gay characters. Do you have a strong say in how queer characters are represented in that show?

Robinson: I love working on True Blood because there are so many gay characters, and the entire metaphor the show is based on has to deal with questions of identity and what happens when vampires "come out of the coffin." I suppose I have a voice in how the queer characters are represented, but I don't really need one; most of the characters were established by Alan Ball and the other writers long before I got there, and HBO has zero problem with gay content, so there are rarely the questions you have to deal with on other networks having to mediate the gay content.

Leite: HBO seems to be creating shows that are more progressive, and as a network, it's seemingly more open to taking risks. What are some of your favorite queer characters on television right now?

On the air in the past: Bette and Tina from The L Word, Starbuck on Battlestar Galactica (not gay per se, but whatever), Spencer and Ashley from South of Nowhere.

Leite: What kinds of changes would you like to see happen in the way queer characters are portrayed on television?

I am interested in a show where the lead is queer without it being a "gay" show: The lead is gay or bisexual, has straight friends and gay friends, and that's just the deal. I have no idea when or if that will happen, but I never thought we'd have the right to get married, so go figure!

This is the third installment in a series of interviews with queer women in the TV world. In the last two installments we chatted with Jamie Babbit and Karey Dornetto.

Check out our show Be Here Now-ish to watch our trailer and see our recently successful Kickstarter campaign. Visit Facebook for more updates! 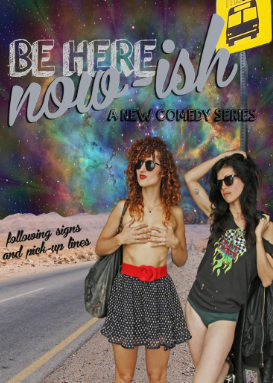