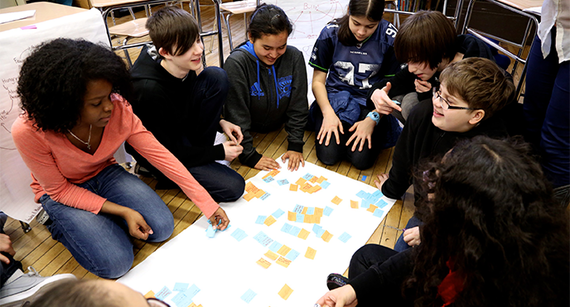 
One chilly morning last January, twenty-five eighth-graders sat on the floor of a classroom in a brick building in Manhattan's Chelsea district, shouting at each other. They were playing a game called Socratic Smackdown, which calls for group of four students to debate the meaning of a particular text in front of their peers.

The text today was a poem—The Hangman, by Maurice Ogden. A tall, blonde-haired boy in the middle of the room was trying to make the case that the eponymous hangman was clearly supposed to symbolize death. Before he was done making his point, the girl next to him interrupted. "You're reading the text wrong," she said. Some of the students snickered. A student pointed out that he'd have to deduct two points because she'd interrupted. She shook her head. "I don't care. I can't sit here and listen to him talk about symbolism when he is so obviously wrong." The class cheered.

This is Quest to Learn, a public secondary school where the teaching curriculum is modeled on game design principles. Students in each class undertake a series of "missions" through the semester, broken up into smaller "quests". (Think of it as one large problem broken up into a series of smaller problems.) Missions and quests are designed by the school's teachers, and are in line with state-set standards. The overall mission of this English class was to write a dystopian story. It was called "The Writer Games", after The Hunger Games. The teacher had been known to come to class dressed as Effie Trinket, the escort of the District 12 tributes in the books. Today's quest called for analyzing current dystopian fiction, hence Ogden's poem.

In another classroom down the hall, a sixth-grade class was playing games on government-issued MacBooks. The teacher, a young woman with shiny black hair in a peach-colored power suit, said this semester's mission was to pick a real Supreme Court case and have the class argue both sides, with three of their peers serving as "judges." Students have the whole semester to prepare their case, while the judges are tasked with reading up on the issue to ensure a fair and balanced decision. Last year's class had the same mission; the case they picked was Obergefell v. Hodges, the landmark 2015 case in support of marriage equality. "We nearly had a riot with that one," the teacher confessed. "The kids who were assigned to argue against it were incensed. They didn't understand how anyone could oppose a basic human right."

Classes at Quest to Learn also have unconventional names: "Sports for the Mind" stands in for media arts, and "The Way Things Work" is the rough equivalent of mathematics. In this semester's "Sports for the Mind", the students must save New York from a fictional apocalypse by designing a role-playing game. Quests involve discussing infrastructure and the different roles city officials play to keep a city safe during emergencies. (Hurricane Sandy provided ample real-world examples.) A floor below, kids in a fourth-grade were designing their own superheroes on a complex-looking graphics program. "My superhero is a girl," a young boy with curly blonde hair said, stepping aside so we could see his screen. "Because there aren't enough girls kicking butt."

A partnership between learning design studio Institute of Play and the Department of Education in New York City, Quest to Learn opened in 2009 with funding from The MacArthur Foundation. There's a lottery each year to get in. There are some 650 students, spread across middle school and high school. Class sizes are big, with around 30 kids per class. The school shares building space with six other 'experimental' schools; one is visual arts-focused, another is tech-focused.

High school students at Quest are given harder missions, and they 'level-up' faster than middle-schoolers. The gaming terminology also extends to grades—there's no A, B, or C grades at Quest. Instead, it's Novice, Apprentice, Senior, and Master. The idea is that this holds more meaning for the students, motivating them in a way that random letters can't. Teachers employ real-world examples whenever possible. One art and design mission involved energy-efficient food trucks. In ninth grade biology, students spend the year as workers in a fictional biotech company, where their job is to clone dinosaurs and create stable ecosystems. As in many games, there's also a 'boss level' mission. It usually takes place before the end of a semester, and involves teams of about 15 students undertaking a weeklong challenge. Last semester it was a recycled fashion show; before that, to create a functioning Rube Goldberg machine.

Quest to Learn students participate in the same standardized tests as the rest of the country; according to the Institute of Play, which commissioned a study from Florida State University into how well Quest students ranked among their peers, in the first 20 months, students at Quest showed significant gains in systems thinking skills.

Many people hear about Quest to Learn and think that students sit around playing video games all day. That's only partly true: digital game playing makes up around 20 percent of the curriculum. It's usually games with an educational bent, like MineCraft, or Dr. Smallz, where students take on the role of designers, scientists, doctors, and detectives to explore cellular biology and the human body. Ninth graders play Storyweavers, a collaborative role-playing game.

The appeal of the Quest to Learn curriculum is similar to that of a well-designed game: it requires participation and interaction, and there's immediate feedback. Challenge is a constant, and learning is achieved as much through failure as through success. Ross Flatt, a former assistant principal at Quest to Learn and one of its founding teachers, said the kids who thrive at Quest are often the ones who don't mind making mistakes. Imagination and play are important, but the real key is collaboration and a desire to be challenged in a way that sometimes isn't possible in other school environments. (The school has an advisory program for new students, to help them—and their parents—understand how the school operates. It consists of sample missions and quests.) Teachers too, need to be onboard. "We look for teachers who are okay with letting go of absolute control," Flatt said. "Who can command respect while allowing the students to explore things beyond what's written down. And who don't mind going on tangents."

Flatt receives hundreds of requests every week from teachers and schools around the country who want to implement Quest to Learn's teaching model. Recently, a Chicago school asked for Quest's entire curriculum, and tried to integrate it into their existing one. It didn't work out. The teachers were not given sufficient training, and students were often confused. "This is a concept that requires everyone to not just be onboard and willing, but to actually understand why things are done in this way," Flatt said.

In recent years, forward-thinking educators like Flatt have helped build significant interest in the educational benefits of playing and designing video games. There is now increasing acceptance that the process of game making—the structuring of a world with constrained rules--enhances thinking and problem solving.

This is an edited excerpt from Power Play, a book by Asi Burak and Laura Parker. Copyright © 2017 by the authors and reprinted by permission of St. Martin's Press. 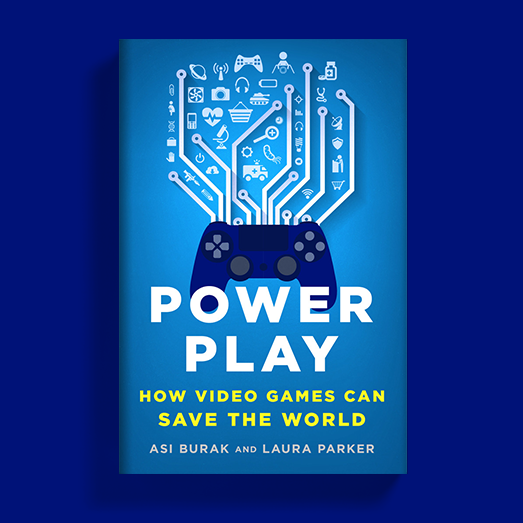 ASI BURAK was named one of the "Digital 25: Leaders in Emerging Entertainment" by the Producers Guild of America (PGA) and Variety Magazine for his work with Games for Change. He co-founded and led Impact Games, the creators of the acclaimed PeaceMaker and Play the News.

LAURA PARKER is a journalist who writes about video games and technology for publications including The New York Times, The New Yorker, and Vanity Fair.