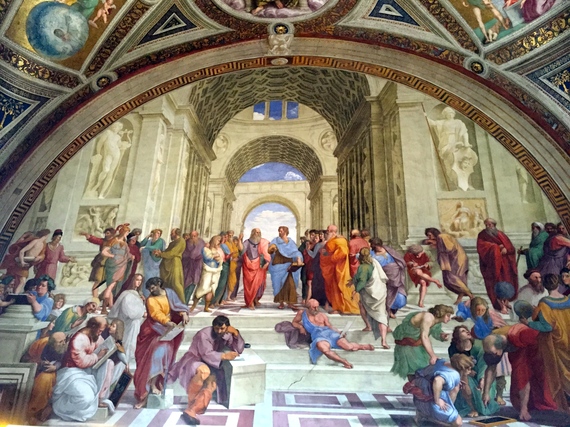 On a recent trip to Rome, I was walking through the halls of the Vatican museums and after entering one of the Raphael rooms, I turned my head to discover, to my amazement, my favorite fresco: The School of Athens. I had somehow forgotten that this image resided inside the walls of the Vatican, so the unexpected encounter with it was the most delightful surprise.

The School of Athens has been one of my favorite artworks for a while, partly because of all the nostalgic memories of entire afternoons spent in my college library reading the works of the philosophers depicted in it. I had seen photos of it on computer screens and poster prints, but facing it in its grand, original enormity felt like I was there too, among my philosophy heroes.

However, it is not just the nostalgic memories of my own intellectual journey that make me love this painting. I love it also because I feel it represents the most exciting feature of the human spirit: the passion for knowledge, for figuring out the world. The other three walls of the room are also covered in gorgeous frescoes, representing theology, art and law, but to me the School of Athens is the grandest and most inspiring of them. This image represents the giants on the shoulders of which we climbed to reach for knowledge that has far surpassed their wildest imaginations. Sometimes those shoulders were flimsy and unstable, like Aristotle's theory of motion, but the spirit of the School of Athens, the invitation to ask big questions, the public place to propose tentative answers and have them bolstered or refuted -- that lives on and is still the engine behind any true quest for knowledge.

I spent a long time taking in the details of the painting, trying to recognize in the postures of the characters the spirit of different schools of thought or the personalities of different philosophers - a joyful exercise. The one charter that struck me the most was the poorly clad old man laying nonchalantly on the steps of the school, blocking the way of Plato and Aristotle who are approaching from the background. Rumor has it that this is Diogenes of Sinope, the "father of cynicism".

On the plane back from Rome, I went back to the sources, the Lives of Eminent Philosophers (by another Diogenes, Diogenes Laertius) to read up on him and refresh my memories. The account portrays Diogenes of Sinope as a frustrating individual, devoted to a life of boastful simplicity (he was a beggar who slept in a giant ceramic jar in the marketplace) and unhindered defiance of social norms (when at a feast, certain people threw bones at him the way they would to a dog, Diogenes played a dog trick and urinated on them). He had a sharp intellect and an even sharper tongue that he used to taunt all authority figures of his time. He often disrupted Plato's lectures and when Alexander the Great, leaning over him, offered to give him anything he wanted, Diogenes famously retorted "Stand out of my light.". The collection of anecdotes about Diogenes of Sinope is a copious read, at times funny, at times outrageous, at times profound, and the central character, Diogenes himself, is a pain -- an uncomfortable pebble in the shoe of all who have taken on an intellectual journey through the land of big questions.

The sentence that touched me the most in the entire piece on Diogenes was this: "Still he was loved by the Athenians." The idea of this sentence is, I feel, beautifully reflected in Raphael's fresco. I love first of all that Raphael chose to depict Diogenes, and I love how he depicted him. I love the fact that Diogenes occupies a central place in the image. I see this as a metaphor for a profound idea -- that in the space of knowledge seeking, the uncomfortable questioning of authority has to take a central place; it has to be loved just like the Athenians loved Diogenes. An important part of seeking the truth is doubting, questioning, challenging. If the path you are on is never crossed by the authority-questioning spirit of Diogenes, it is not a path towards knowledge, and if you do not let yourself be crossed by him, you are not a knowledge seeker.

I also like a few other things about the way in which Diogenes is depicted. I like that he is the only one who has a split audience. While other characters are enwrapped in solitary contemplation, like the front left character writing at the table (thought to be Heraclitus), or demonstrating to a group of awe-struck followers like the front right character drawing with a compass (thought to be Euclid), Diogenes' audience is torn. The man in blue points to the approaching intellectual authorities, Plato and Aristotle, while the man in green makes an exasperated gesture to acknowledge Diogenes. Questioning authority gives us options, alternatives, it will make us feel torn between competing theories. I also liked that Diogenes does not entirely block the path of Plato and Aristotle but he does force them into a slight detour, just like questioning authority does not stifle the quest for knowledge, but makes us seek new and better routes. Finally, I like the fact that Diogenes is defiant yet vulnerable, exposing his bare chest in a non-aggressive posture. This is just like questioning authority, challenging and doubting should be. The role of doubts is not to stay with us forever but to expose themselves to careful examination and to force us to take a closer look at what we think we know.

On the first day of teaching after spring break, I showed my students the photos I had taken of the painting, introduced them to Diogenes and encouraged them to question authority -- my authority as a teacher, the authority of their textbooks and the hardest authority to question of all - that of their own entrenched assumptions about the world. I asked them to embrace the spirit of the annoying Diogenes and to love him just like the Athenians did, because the School of Athens would not be the powerful, inspiring place that it is without a Diogenes of Sinope.