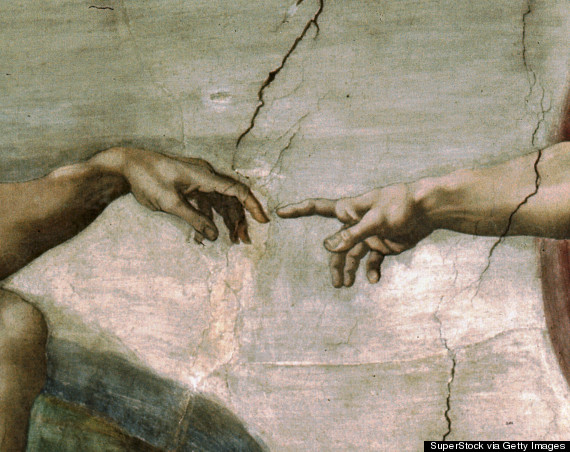 "If I started talking about science from the pulpit," a seasoned Methodist minister sitting to my left said, "my wife would shoot a spitball from the choir!" As Anthony Thomas' new documentary about the rise of creationism entitled Questioning Darwin is about to air on HBO, I've been thinking about a thought provoking seminar I took part in seven years ago
at Auburn Theological Seminary in New York City called: Evolution, DNA and the Soul.

Needless to say, this was not your typical preaching course. First off, it was taught by a biologist from Columbia University, Bob Pollack, who drew maps of DNA on the board that looked like offensive plays of the Seattle Sehawks. Second, the class was a diverse mix of religious traditions and denominations -- there was a retired Catholic priest, a young Presbyterian just starting his ordination process, a Rabbi of a small synagogue, a hospital chaplain pursuing a Ph.D. in psychology, a young Muslim who shared Koranic verses on Eden -- and they all came with a desire to learn science. The tough questions were all out on the table: How do scientists know that life emerges from totally random processes? Can science really tell us about the beginning of the world? Are we even close to explaining consciousness?

Pollack, who sported a gnome-like beard and the grin to go with it, was blunt:

The world had its beginning in a tiny particle fourteen and a half billion years ago; life and consciousness arose from a series of random mutations and energy transfers, and the whole thing will eventually have its end in a lukewarm soup of electrons. And yes, we have the data to prove it.

Needless to say, this made me and the other clergy around the room rather restless.

"But we are not simply chemicals," a minister who works for an inter-denominational church organization replied: "I have experienced, in my life, moments when I knew that I was connected to the One -- to the spirit which is beyond the physical -- and that is what I mean when I talk about God -- that universal spirit."

The retired priest put it another way. "You can not reduce the mind and heart to a mathematical equation." A Unitarian educator took another tactic: "Isn't science a myth just like religion is a myth?"

It looked like the religious folks -- even the Unitarians -- were fleeing from the cold facts of science at the speed of light. And with each comment, Pollack's restlessness and hostility toward the notion of "the spiritual" was physically evident. His knees bobbed up and down. He drew his arms around his chest. His head nodded in that "keep talking, because I am going to make you eat your words" pose. I thought the guy was going to snap.

But Pollack suppressed his anger in a most surprising way. He pulled out a Bible.

Look at Genesis. In Genesis the entire universe is made from words. The earth and sky and every plant and animal are made through God's speech. But humans are not made in this way -- God synthesizes humans from nature, from dirt, from a mix of organic and inorganic. In other words, we are made of live things and dead things. And we are the first example of chemistry and of transformation. As a result, we are the first species to have developed the ability to understand the bio-chemistry of the natural world. For this reason we are called "in God's image."

The scientist was preaching. In one stunning move of theological archeology, Pollack had dug to the heart of the text and unearthed a revelation -- the God of Genesis is not only the creator that brought the universe into being with the power of language, but the first bio-chemist who conducts experiments with complex organisms. Adam and Eve eating of the tree -- knowing that they would "be like gods" -- was the birth not of sin, but of science.

As part of the course we all took a field trip to the Darwin exhibit at the Museum of Natural History. While the throngs of public school kids tapped the glass of the lizard exhibit, we clergy stared into a small case displaying the leather-bound Bible Darwin read on the Beagle.

Can everything be reduced to an equation? Theoretically, yes. But since neither eating of the Tree of Knowledge, nor devoting one's life to neuro-scientific research, is going to produce a satisfying equation that accurately embodies the intricately complex system that we term human consciousness, the question is actually not so important. The important question, we clergy folk discovered, was the one that Pollack posed to us after the short bible study: "So what knowledge other than scientific knowledge do we need to thrive as humans?"

For those of us who have felt the power of religious ritual, the embrace of religious communities, the prophetic call to a path of righteousness, and the reverberations of life-changing moments of deep connection with the Holy Blessed One, there is another type of knowledge.

On the last day of our week together, both types of knowledge, scientific and religious, were in dialogue with one another. And we asked ourselves what it would mean to be clergy who not only respected science's vision of a random, non-designed universe, but who preached the importance of taking a fresh look at our traditional theologies in the light of Darwin's brilliant discoveries. I haven't heard yet from my Methodist friend, but I hear he's practicing his skills at dodging spitballs.