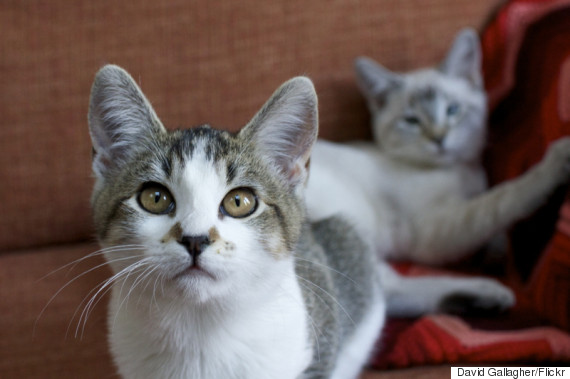 While it’s no secret some people love cats (see: the Internet), felines themselves are complicated and confusing creatures. One day, they’re rubbing up against you, demanding attention, and the next, they deny you the simplest, friendly purr!

On those days, we question if cats are living with us by choice or simply because we’re keeping them there. After all, they were once wild animals!

To learn more about how exactly cats went from living in the wild, to becoming our pets, to their current celebrity status, we teamed up with Purina in search of answers to cat owners’ most pressing questions about feline evolution. Thanks to science, we now know a lot more about the lineage -- and the wild side! -- of our furry (and sometimes grumpy) friends.

1. "What makes cats different than other domesticated animals?"
While most species were domesticated because of their value to humans (horses for their labor, cows for their milk, and so on and so forth), you can’t really put cats to work. So when cats needed shelter and food, they essentially took domestication upon themselves.

“Unlike barnyard animals and livestock, cats took into account that it was a good idea for them to get along with people,” says Stephen O’Brien, chief scientific officer for Genome Bioinformatics at St. Petersburg (Russia) State University’s Theodosius Dobzhansky Center, who has conducted multiple cat-evolution studies.

What most likely happened: just as humankind was establishing the first settlements roughly 10,000 years ago in a part of the Middle East known as the Fertile Crescent, wild cats fed on their trash and preyed upon mice that infested livestock feed. The cats that were genetically tamer most likely formed a bond with certain humans, which eventually led to cats living inside their homes.

2. "So, did cats essentially domesticate themselves by being nice?"
You could say that. “There was an advantage associated with being a nice guy if you were a cat,” O’Brien says. “By becoming friendly with humans, there was another source of nutrition, protection and companionship that couldn’t be [found in the wild].”

Domestic cats can become pets, wild cats cannot. But it’s not a question of nice or nasty, says John Bradshaw, foundation director of the Anthrozoology Institute at the University of Bristol and author of Cat Sense.

“Mutations somehow give domestic kittens the ability to become sociable with people -- but if they don't encounter humans until they're over 10 weeks old, they can remain as ‘wild’ as any wildcat,” Bradshaw says.

4. "Why do cats race through the house sometimes, especially at night? Is this because of their ‘wild’ past?"
“A sudden burst of energy, excitement or simply pent up energy can cause a cat to spontaneously run around like crazy,” says Ragen T.S. McGowan, Ph.D., a behaviorist at Nestlé Purina.

“Cats are naturally crepuscular, which means they are most active at dusk and dawn,” McGowan says. “This stems from the fact that for their wild counterparts, these are the best times of the day to hunt.”

While wild cats take a series of short “cat naps” throughout the day to stay vigilant toward both predators and potential prey, house cats live in an environment where it’s safe to sleep for long stretches of time during the day -- which amounts to having extra energy to burn at night.

5. "Why are all cats roughly the same size, unlike dogs?"
While dogs, as a species, exhibit an extreme size divergence from a tiny Pekingese to a massive Great Dane, cats typically range from 8 to 12 pounds. Why is that, exactly? Well, nobody knows for sure.

It could be because size distribution is more prevalent in the felidae family (all cats) than the felis species, which spans from jungle cats to domestic cats, O’Brien says. However, it could also be because dogs have been domesticated for much longer and bred more intensely than cats. Another factor, O’Brien points out, is that they have more diversity to begin with in terms of genes responsible for metric growth, which could account for the larger size variety.

6. "Why don’t cats roar like their larger ancestors?"
The cat family has 37 species, 38 if you count the house cat. But the only cats that roar are the great cats like lions, tigers, leopards, jaguars and snow leopards, O’Brien explains. They’re able to do this because of their ossified hyoid bone, an adaptation specific to the panthera group, which allows them to roar.

But cats don’t need to let out a sad “meow.” Pumas and cheetahs don’t roar, either (they scream and purr, respectively).

7. "Why do cats only rub up on you seeking attention on their own terms, but ignore you otherwise?"
”Cats are descended from a solitary species, and have yet to evolve a need to socialize 24/7,” Bradshaw says. “Most of the time, most of them just want to be alone.”

Don’t take it personally ... maybe your cat is just an introvert.

8. "Are cats’ tails just for show, or do they actually serve a purpose?"
Monkeys may use their tails to hang from trees, but cats primarily use their tails for balance, O’Brien says. As cats run, their tails essentially serve as a rudder, giving them balance to keep on their intended path as they turn a corner. The best example would be a cheetah reaching 70 mph speeds.

There’s another, surprising purpose: They’re a part of the reproductive process! “When the female gets mounted, she has to agree to lift her tail,” O’Brien says.

9. "Did cats ever travel in packs, like dogs?"
House cats, by default, are isolated individuals that do not organize in families; they defend their territory alone, as many other cat species do, O’Brien says. However, when there’s abundant prey and offspring, cats can adapt to a family or pride structure -- like lions that live in packs, or two house cats that get along because plenty of resources are being provided.

10. "If cats are mostly relying on their human keepers for basic needs (like food and water), why do some occasionally bring home ‘prizes’ like dead mice or birds?"
Those “gifts” might not be for you, after all. (We’re sure you’re crushed.)

“The owner may think they are presents, but the most likely explanation is that the cat has brought its prey back to the house to consume it in a safe place -- and only then recalled that the cat food in its bowl is much tastier than mouse,” Bradshaw says.

11. "Where does that myth about cats having nine lives come from?"
Cats' reputation as the ultimate survivors probably originates in their ability to land safely, even when falling from great heights.

“[Cats] can do this because they can twist around in mid-air so as to land on all four feet at once, with their back arched so it can act as a shock-absorber,” Bradshaw explains. “If they manage to right themselves far enough above the ground, they can slow their fall by temporarily extending their legs sideways and using their bodies as a parachute -- rather like a less extreme version of a flying squirrel.”

12. "This has nothing to do cat evolution, but why the heck are cats so afraid of cucumbers in those YouTube videos?"
If you’ve witnessed the viral gold that is cats being startled by cucumbers on YouTube, you’ve probably wondered what about this produce terrifies them. According to McGowan, cats aren’t actually spooked by cukes in particular. Instead, they’re simply frightened by the sudden appearance of an object behind them after being focused on something else (in most cases, food).

“One might expect the same reaction no matter what type of object is placed behind the cat,” McGowan says. “While a handful of cats will react in this way, providing material for viral videos on YouTube, just as many cats will be unreactive in this situation.”

But let’s not all go test that theory; scaring your kitty can induce stress and discomfort. And their (nine?) lives are complicated enough.