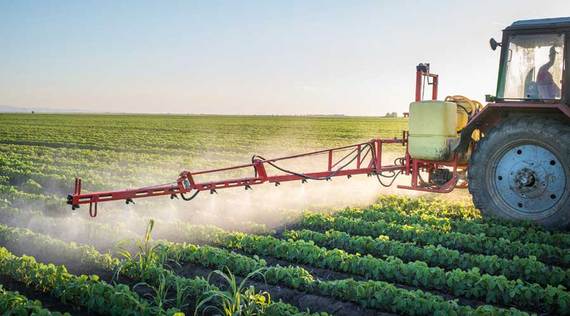 Now it's getting interesting.

A new court filing made on behalf of dozens of people claiming Monsanto Co.'s Roundup herbicide gave them cancer includes information about alleged efforts within the Environmental Protection Agency to protect Monsanto's interests and unfairly aid the agrichemical industry.

The filing, made late Friday by plaintiff's attorneys, includes what the attorneys represent to be correspondence from a 30-year career EPA scientist accusing top-ranking EPA official Jess Rowland of playing "your political conniving games with the science" to favor pesticide manufacturers such as Monsanto. Rowland oversaw the EPA's cancer assessment for glyphosate, the key ingredient in Monsanto's weed-killing products, and was a key author of a report finding glyphosate was not likely to be carcinogenic. But in the correspondence, longtime EPA toxicologist Marion Copley cites evidence from animal studies and writes: "It is essentially certain that glyphosate causes cancer."

Attorneys for the plaintiffs declined to say how they obtained the correspondence, which is dated March 4, 2013. The date of the letter comes after Copley left the EPA in 2012 and shortly before she died from breast cancer at the age of 66 in January 2014. She accuses Rowland of having "intimidated staff" to change reports to favor industry, and writes that research on glyphosate, the key ingredient in Monsanto's Roundup, shows the pesticide should be categorized as a "probable human carcinogen." The International Agency for Research on Cancer, an arm of the World Health Organization, declared as much - that glyphosate was a probable human carcinogen - in March 2015 after reviewing multiple scientific studies. Monsanto has rejected that classification and has mounted a campaign to discredit IARC scientists.

The communication, if authentic, could be an explosive development in the snowballing multi-district litigation that now comprises more than 60 plaintiffs from around the United States accusing Monsanto of covering up evidence that Roundup herbicide could cause cancer. The plaintiffs, all of whom are suffering from non-Hodgkin lymphoma (NHL) or lost a loved one to NHL, have asserted in recent court filings that Monsanto wielded significant influence within the EPA's Office of Pesticide Programs (OPP), and had close ties specifically to Rowland, who until last year was deputy division director within the health effects division of the OPP. Rowland managed the work of scientists who assessed human health effects of exposures to pesticides like glyphosate and he chaired the EPA's Cancer Assessment Review Committee (CARC) that determined glyphosate was "not likely to be carcinogenic to humans." Rowland left the EPA in 2016 shortly after a copy of the CARC report was leaked and cited by Monsanto as evidence that the IARC classification was flawed.

Lawyers for the plaintiffs want the federal judge in the case to lift a seal on documents that detail Monsanto's interactions with Rowland regarding the EPA's safety assessment of glyphosate. Monsanto turned the documents over in discovery but marked them "confidential," a designation plaintiffs' attorneys say is improper. They also want to depose Rowland. But Monsanto and the EPA object to the requests, court documents show. Rowland could not be reached for comment.

"The Plaintiffs have a pressing need for Mr. Rowland's testimony to confirm his relationship with Monsanto and EPA's substantial role in protecting the Defendant's business..." plaintiff's attorneys wrote in the Feb. 10 filing in the multi-district litigation, which has been consolidated in the U.S. District Court for the Northern District of California. "Mr. Rowland operated under Monsanto's influence to cause EPA's position and publications to support Monsanto's business."

The EPA has spent the last few years assessing the health and environmental safety profile of glyphosate as global controversy over the chemical has mounted. The agency had planned to finish its risk assessment on glyphosate in 2015; then said it would be completed in 2016; then said it would be finished by the first quarter of 2017. Now the agency says it hopes to have it completed by the end of the third quarter of 2017.

In a bid to stop the release of further damning documents, attorneys for Monsanto on Monday asked the federal judge in the Roundup litigation to block plaintiffs' attorneys from including copies of documents they've obtained through discovery as exhibits in the court filings so members of the public and the media cannot see them. They argued that plaintiffs' attorneys were unfairly attempting to "try this case in the court of public opinion."

Monsanto specifically complained that the organization I work for, U.S. Right to Know, was monitoring the court docket looking for confidential materials to report to the public. The company said reporting on "cherry-picked documents" could be "potentially prejudicial" to its business and to the fairness of the litigation, potentially tainting a jury pool. "Litigation in the press is not in the public interest," Monsanto's filing states.

The company asked Judge Vince Chhabria to order that discovery materials not be filed as exhibits or other types of filings that could be visible to the public.

Monsanto also made a new filing in the litigation on Friday, laying out its assertion that there is no evidence Roundup and glyphosate products are "defective or unreasonably dangerous" and said the products complied with "all applicable government safety standards." There is no evidence of carcinogenicity in glyphosate or Roundup, Monsanto said in its filing.

In a separate filing made on Feb. 8, Monsanto submitted a court brief arguing that the IARC classification of glyphosate as a probable human carcinogen is not relevant to the question of whether or not Roundup caused the plaintiffs' cancers. IARC's approach is "less rigorous" than EPA's in evaluating scientific evidence, and IARC's conclusions are "scientifically unreliable," according to the brief. Monsanto told the court that neither the views of IARC or EPA are necessarily relevant to the general causation issue of the litigation because plaintiffs will need to present admissible expert testimony showing the company's products in fact caused their cancers.

As the litigation drags on, legislation that could potentially benefit Monsanto and numerous other companies facing consumer class action lawsuits was proposed on Feb. 9. The "Fairness in Class Action Litigation Act of 2017" (H.R. 985) was introduced in the U.S. House of Representatives by House Judiciary Chairman Bob Goodlatte (R-VA.) Business interests backing the law say it would reduce frivolous suits and ensure that plaintiffs receive the bulk of any damage awards rather than enriching the attorneys who bring such lawsuits. But opponents say it would make it nearly impossible for individuals with limited financial resources to challenge powerful corporations in court. The bill would apply both to pending and future class action and multi-district litigation.

"The bill is designed to ensure that no class action could ever be brought or litigated for anyone," said Joanne Doroshow, executive director of the Center for Justice & Democracy. "It would obliterate civil rights, antitrust, consumer, essentially every class action in America."