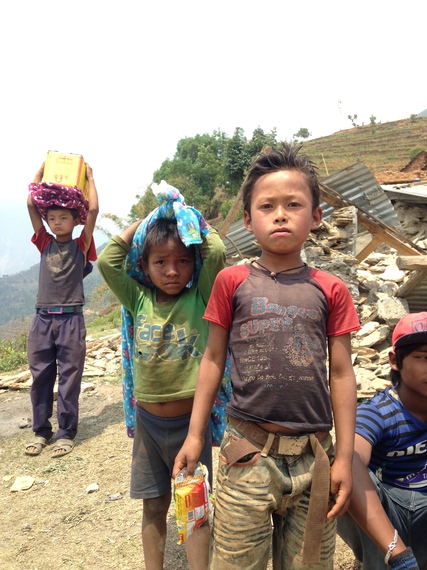 Nepal needs to learn a lesson from Haiti earthquake. Nepal will face the same situation if lesson won't be learned.

In the aftermath of the devastating earthquake occurred in Nepal on 25 April 2015 which killed more than 9,000 people, so many groups and organizations all over the world had solicited donations to support their efforts in Nepal. They raised millions of dollars to support relief efforts in Nepal.

Among of them, some of the Nepalese groups and organizations in the USA also raised hundreds of thousands of dollars to support relief efforts in Nepal. Some organizations collected cash via donation boxes. Grocery stores, restaurants, offices owned by Nepali-Americans have kept donation boxes outside for the people to donate generously. Even, some people were soliciting donations individually at the train stations and on the street. They had promised to help the victims in the quake-hit Nepal.

Millions of dollars had been raised by hundreds of campaigns via crowd funding sites. $2,983,178 has been raised by more than 150 campaigns only via Crowdrise. Most of the campaigns are still open. $7,445,288 has been raised by 1,717 campaigns from 89,190 donors for Nepal relief efforts via GoFundMe. Likewise, Crowdfunding powerhouse Indiegogo had reported that over $3 million had been raised on the platform for Nepal in under 2 months. To date, 42,639 GlobalGiving donors have raised $5,141,813 in support of 89 locally-driven partners for the recovery effort. Less than 24 hours after the earthquake struck, PayPal launched a US campaign in support of more than 20 charities. Appeals in the United Kingdom, Brazil, Canada, Singapore and Australia soon followed. These efforts helped harness an incredible outpouring of support from people around the globe. All totaled, more than 422,000 people used PayPal to donate more than $19 million to more than 70 relief organizations.

Nepalese organization in the USA had raised more than 10 million dollars in the name of earthquake victims in Nepal. Questions have been raised about this money too. Nepalese in the USA are asking to make public their audit reports. Petitions have been started on the popular site Change.org demanding the transparency of earthquake funds. This petition will be delivered to Investigation & Audit, United State Department of Taxation, Irs.gov. Not only Nepalese organizations in the USA but also the earthquake relief aid collected from international and national groups and organizations need to be made transparent.

On the other hand, there is a high risk of corruption in relief. Corruption is a serious problem in Nepal. This is why, the earthquake relief aid received from both international and national sources need to be made transparent. Meanwhile, the World Bank has raised a serious concern over the Nepalese government's plan to distribute housing grant to the earthquake-affected people. The World Bank, administering over the $500mn fund to support the housing grant for the earthquake-affected households, wrote a letter to Nepal Government reminding about the principles under which donors agreed to provide assistance while warning against breaching those principles. Meanwhile, Nepalese people are raising questions regarding misuse of the fund meant for quake victims. It is alleged that the government has been doling out money from the fund to its NGOs through the National Reconstruction Authority.

In this case, Nepal needs to learn a lesson from Haiti earthquake. Some $9bn of international assistance was given - $3bn from private individuals and companies and $6bn from governments and global institutions, according to the Office of the Special Envoy for Haiti (OSE). But less than 10% of the $6bn from public donors has gone to the Haitian government and less than 1% was given to local organizations. Concerns about corruption and weak institutions meant international donors were reluctant to channel money through Haiti's organizations. Nepal will face the same situation if lesson won't be learned.