Part IV in the series based on the new report "It's All Interconnected."

Time Warner and Comcast are planning to merge. But before they do, we are suggesting that in every Time Warner or Comcast franchise -- (i.e. any cable company offering service under any municipality, city or state (or system-wide) franchise) -- be required to answer a short questionnaire that will help better ascertain, through facts, whether Comcast and Time Warner Cable should merge -- or what concessions should be demanded, even if they don't join.

Click here for a "SPECIAL SECTION: Time Warner and the Social Contract" from the Public Utility Law Project's report "It's All Interconnected.", written by New Networks.

Starting in 1995, both companies signed agreements with the FCC called the "Social Contract" and we are curious to know what ever happened for almost two decades.

We will use quotes from these documents:

The Social Contract was signed in 1995 to settle disagreements as the cable companies wanted to offer new services and wire the schools but wanted rate increases, above and beyond normal rate increases. There were caveats, but the companies were given the opportunity to raise rates up to $5.00 a month per household.

The original Time Warner agreement was for five years and the company was supposed to spend $4 billion on their networks. According to the Order:

"The Social Contract is for a term of five years. From 1995 through 2000, Time Warner is required to invest $4 billion to rebuild and upgrade all of its domestic cable systems, including deployment of fiber optic technology, increased channel capacity and improved system reliability and signal quality."

Question 1: The Social Contract was only a five year contract. Time Warner's contract was from 1995-2000 and cost the customers, by the last year, $5.00 a month extra. Please supply the following:

In the Social Contract, the companies committed to bring the Internet to schools in their franchise areas. While it varies by company, in general, schools were all to be given free cable modem service, a free cable modem, (the electronic box designed to let the customer use the Internet), -- and would receive the inside wiring at cost. The Comcast Social Contract states:

"Comcast will provide a free service connection to each public and private school located within 200 feet of Comcast's activated cable plant. Comcast will provide a service connection at cost to public and private schools beyond 200 feet of its activated cable plant. Comcast will also provide a free modem and free modem service to all such schools within a year after Comcast makes personal computer-based Internet access service via cable commercially available to residential customers. Free cable service, including basic and enhanced basic service, and service offered on migrated and new product tiers, will be provided to all connected public and private schools... Additional internal wiring to serve additional outlets in any school will be provided at cost. Such wiring will be provided at no charge if Comcast is able to coordinate installation with other comparable electrical wiring installation being done in new or rehabilitated schools."

Moreover, the Time Warner "Social Contract" specifically states that the first modem is free and all of the other modems in the school will be 'at cost.'

"If requested, each school will receive one free modem to use this service with additional modems provided at cost."

Question 3: For the Years 2001-2014 -- Assuming that the company was still collecting the money from customers for the years 2001-2014, please supply the franchisee all information pertaining to the franchise coverage area.

Question 4: Other Questions -- Please supply documentation to show that every school was properly notified that they could be a benefactor of the Social Contract in every school year.

In the next exhibit we have information from Time Warner Cable's 2012 Annual Report that supplies a) the cost to Time Warner to offer the customer cable, broadband-Internet and phone service, b) the average price the customer will pay, c) the profit from the customer, d) the profits over the costs as a percentage and e) the overall profit margin (costs/profits.)

Please explain how the high speed data services, which were being funded by parts of the Social Contract, have a profit margin of 97 percent and that the internal cost per month is $1.34 a month.

And please supply in your answer what another Internet Service Provider (ISP) would be charged if they were able to use the Time Warner network.

The latest American Customer Satisfaction Index survey, May 2014 claims that Time Warner and Comcast are some of the most hated companies in America for their Internet service and even the cable service.

"Time Warner Cable lags behind the entire industry following its second consecutive yearly decline, down seven percent to an all-time low of 56. The combination of low and downward-trending customer satisfaction for both Comcast and Time Warner Cable is cause for concern amid merger talks between the two companies. The issue at stake is not that the proposed merger will limit competition as the service territories of the two companies do not overlap. Instead, it is the question of whether a combination of two pay-TV providers with such poor records could possibly create a better customer experience, especially given the volume of evidence from ACSI data suggesting that mergers in service industries tend to damage satisfaction--at least in the short term." 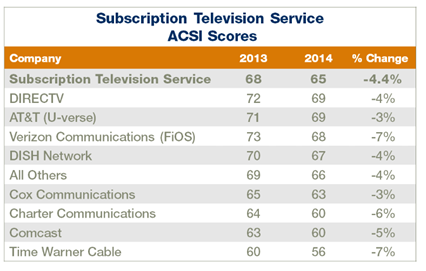 Question 6: Essay Question: What steps are you planning to take to return the confidence and support of customers for this merger?

Conclusion of this Questionnaire.

NOTE: We do not consider the responses to this questionnaire proprietary about our franchise area and we will be comparing it with other franchise areas to help better ascertain whether Comcast and Time Warner Cable should merge.