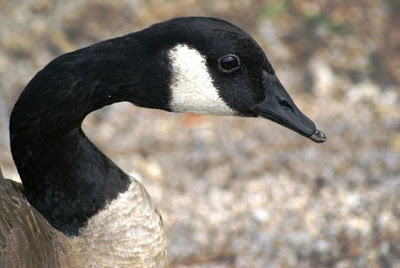 Over the last 10 years, I've been besieged with questions about geese.

"Are they from Canada?" is the most frequent, followed by the inevitable"How do you tell them apart?" Children always ask if you can pet them.

Here are the answers to these questions and others that arise when geese surprise us with the unexpected, as these unbridled spirits are prone to do.

Are they from Canada?

No. The true migratory goose was almost driven to extinction from over-hunting some 50 years ago when scientists found some nesting pairs at Silver Lake, Minn., and placed them in captivity.

Coincidentally, wildlife officials began a national recovery program by taking and incubating nest eggs from "decoy" geese they had captured to lure other geese (coming down from Canada). Eventually the young were deposited throughout the U.S., sometimes in locations where there had never been geese. Thus the resident goose was born.

Resident geese don't migrate to Canada in part because they don't know the way. Migratory patterns are a learned behavior and no one was around to teach them the age-old routes of their ancestors. Eventually, the youngsters, drawn to U.S. parks and ponds, established flight patterns of their own.

Resident geese stay in the U.S. because this is where they were born and their nesting grounds are here. However, if some handsome, non-migratory dude finds the love of his life in a migratory group, his life instantly changes. He becomes part of the cycle for which he was originally intended. They head for Canada because the female determines the nesting site..

How do you tell them apart?

Look for anything that sets them apart: white eyebrows, mottled feathers or obvious injuries. The Half Moon, in photo, one of the geese in my study group, is missing part of his upper beak; Auburn, a shy, skittish female, is blind in one eye.

You can also memorize their facial expressions, weird as that sounds. I'd know Zoey, my lead goose, anywhere by her expression. I can also identify several of her young because they have the same look. The Zo babies, I call them. Another identifying factor is the white chin strap (see photo), which runs from cheek to cheek below the face. Chin straps can be thin, oblong, chunky or fat, and shaped in unusual patterns.

Can you pet them?

No. Canada geese don't like to be touched or petted. It's just not their thing. They show affection for humans (and each other) vocally. In addition to honking, geese coo, chatter, chirp and chime.

Why are Canada geese described as being human-like?

Many of their habits and behaviors resemble ours. Like us, Canada geese have an inordinate sense of family. Like us, young geese - or juveniles, as they're called - go through a lengthy transition to adulthood, trying like teenagers to find their place in the world. And like us, Canada geese seem to fall in love; perhaps choosing a mate more carefully than us because for them it really is a lifetime commitment.

Canada geese males are also among the most romantic creatures on earth. Every day is Valentine's Day for females in mated pairs. Their mates hover over them, seeming to whisper sweet nothings as they brush their necks with those powerful bills. And it would appear to have little to do with sex. Geese mate only once a year. The rest of the year - 10 months or so - is pure romance and, of course, parenting, if there are goslings. The parents - gander and goose - also raise their young together, sharing the responsibilities.

How do you tell a goose from a gander?

A goose (female) is smaller, less vocal and tends to stay in the background. The gander is louder, larger and initially the friendlier of the two.

Do geese mate for life?

Yes. The goslings may come and go but the mate is forever.

How long do they live?

Resident geese -- with fewer challenges from the wild -- can live to be 25 or 30 years. The geese in my study group are beginning to show their ages. The Grandfather must be at least 15. Horatio is 10; his sister, Olivia, is 7. Gandy (Olivia's mate) is about 10. Gandy and Olivia's son, Baby Honker, is 3.

What are the babies called?

Why do they hiss?

The hissing appears to be a warning or defense mechanism; a way of saying ... keep your distance until we know you better ...

Geese usually hiss when strangers veer too close. Generally, I ignore the hissing, I'm so used to it.

Don't take the hissing seriously unless there are newborns or a nest.

If Nesting Dad is hissing or beginning to spread his wings, quickly move away.

Generally, the hissing will subside if you talk quietly to them. Canada geese also seem to love baby talk and high-pitched voices. I've noticed that when I'm talking to (human) friends, my geese will sidle over, seemingly entranced by the animation in my voice.

The hissing also seems to be primarily reserved for humans. I've occasionally seen geese hiss at squirrels and dogs ; however, never at other geese.

Generally, resident geese are exceedingly gentle around people. However, Canada geese are also highly territorial -- and chasing other geese, often and without provocation -- is part of the culture.

Geese don't have teeth. However, their jaws are lined with serrated ridges made of cartilage for pulling up grass and other vegetation - and apparently strong enough to inflict a little pain when they pull the tail feathers of other geese. Fortunately, they rarely consider humans part of their nipping repertoire.

Why do geese stand on one leg?

It seems to be a form of rest or relaxation. Some geese fall asleep in this manner. On occasion, it can be a sign of injury but my experience indicates that it's usually just a comfortable stance.

Are these geese the same geese that were here yesterday?

Probably not. Like their migratory cousins, the heavens are a second home. Resident geese may not travel the distance to Canada but the group you saw at the city park yesterday is probably 200 miles away by now. The need to fly -- like wild desperados into the night -- seems ingrained.

What do geese eat?

Grass. Like horses and cattle, geese are grazers, thriving on vegetation. They will travel great distances to find the most succulent grass, pond-hopping to as many as a dozen locations in one day. They also love the occasional treat: bits of wheat bread or cracked corn and other grains, especially in winter when grass is scarce.

Why is their poop green?

Blame it on all that grass. That's mostly what they eat.

Research also shows that geese poop, while messy, is basically harmless, and unlike dog or human feces, generally has no odor.

Who's at the top of the social honk-osphere?