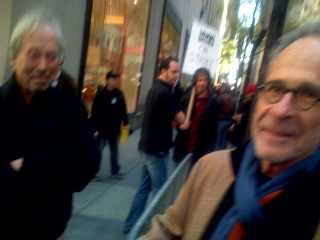 It's Ron Rifkin in solidarity.

9 am to 1 pm at Rockefeller Center. A giant inflatable rat is here, sort of like a false god of dirty mammon. He is the symbol of striking here in Gotham. He is available for rent. It might be fun to have the rat at some sort of post-ironic hipster party. It occurs to me that in Los Angeles, if the giant inflatable strike rat came out, there are certain people I know that would get down and pray to him. Like at Lourdes. I will desist from all further LA/NY comedy.

I run into many old friends from the theater. People who now run TV shows. Nobody has shaved (Of the men.) I did last night. I note with same pleasure that I am perhaps the only one here wearing a tie. I have a sense of ritual. Of the old timers. Of attention must be paid. I flirt with smart and unshaven-looking exhausted writers (of both sexes), most of them smile at me, not seeing this day as an opportunity to make cool new friends. But in fact, a very serious, perhaps deadly game of chicken. Which it actually is. I, however, am exhausted, and relieved to be with other writers, and not reading comments from disgusted dispensers of one line put downs on the HuffPo, dripping with unearned contempt for what I do for a living.

Last night, there was a comment on the good pages of the HuffPo from a gentleman who seems to be named Bill Seward, who accused me of engaging in "Nancy boy rhetoric", which makes me roar with laughter. I like the phrase. And am going to use it, and use it on-line, and never ever give him a cent. The "bent" of his comment is that I am too new at this to have earned the right to an opinion. (My first job was twenty years ago. ) It seems there's a sportscaster in Los Angeles with the same name. When you read his bio (if it's the same chap), his testimony seems redolent of booze and lost-chances, and Tom Buchanan from The Great Gatsby. In any case...

The age-range this morning is wide. An elderly woman, one of the great armies of tough broads in New York, in the tradition of Bella Abzug, et al, is marching -- like a peeved water bird -- chanting the cry of the day, which seems to be something about "no check, no pay, no write, no...stay"??? I can't follow the chants, and also, I must point out, the placards lack a certain style. It's true. We writers of the WGA East are not good at cheap quick jabs, sloganeering, and whatnot. But back to the old lady. New York -- smart, funny, angry New York -- was built on the chicken-noodle soup and rage that these gals dole out.

There are older men here too, patient, pacing their saunter, men and women who have been here before, a couple of times, in past years. Some of the faces show the lines that are particular to a writer's face. A combination of worry and humor, weariness and certitude that old pros carry with them. Some jackets bear the logos of TV shows or movies long forgotten, like badges of honor.

I am joined by Ron Rifkin at noon. He is on my show, "Brothers & Sisters", and is marching in solidarity with the Writers Guild members. All of whom know him. He is greeted warmly, and he and I do a little thing for the press, talking about the issues at hand, trying to explain how many writers earn very little, and how much this battle means in terms of whether you're gonna have a decent life as a writer or a hard-scrabble one.

So many people dislike writers, it seems. Odd. As though the job were a trick played on all the rest of the workers in America. (Now that I think of it, I can see how that opinion could be arrived at.) But still, looking around here at the March of the Schleppers at Rockefeller Plaza, it seems that for the most part, the motto of these people has been rather more like that of doctors. "First do no harm". "Then make them laugh." "Then make them think." "Then have a sandwich". Etc.
More old friends. So many talented people who have truly done things that add to the sum of what we have on TV that's not without merit.

Writers from The Sopranos.

The man who wrote Ghost.

A playwright who wrote a seminal play of his generation.

A lot of very hard workers. No robber barons, no captains of industry, no empire builders. A few blocks away, Aaron Sorkin is in previews for a new play about the birth of television. I think about that, about Aaron, whom I used to see when his play A Few Good Men was on while my own Substance of Fire was playing a few blocks away. We used to stop and talk on the street about how stupid we were to even be playwrights. He too wore a tie to rehearsal in those days, and when I asked him why, way back then, he said "Because Mr. Abbott did." I smiled and went to my own show, shaking my head. (George C. Abbott.) A long time ago.

You can't earn a living as a playwright anymore. And if we lose this fight, being a TV writer is going to be harder too. So what is the value of narrative in our culture? Do the money guys value the worth of the story tellers in their marketplace enough to have an honest dialogue about paychecks and future income? I think about that. About how great West Wing was, and how Aaron encouraged me to try my hand at TV. Gave me my first network job, an episode of West Wing. It was his last season, and we had been friends for a long time, and he was tired. And he was embattled. But he was idealistic, and single minded, even while he was burning out from that show.

Now, five years later, I know what it means to get a show on the air. You have to grow up fast, and in order to keep it running, you have to grow up faster. It takes the child out of you. To have a machine that big, which employs so many people. And it can be fun, but it can be ugly, and dirty and saturated with fear. And now, frankly, the medium is changing so fast -- the youth culture moves with such ruthless abandon -- that the moguls can barely keep up with the next big thing. What's to become of the older generation of writers who are not a part of the gaping maw of "the now"? Who live on residuals and on the shots they get from the rare producer that remembers the value of what came before?

On the face of it, it is easy to laugh about the writers going on strike, and I've read enough of the comments here to stop caring to change the minds of those who think all writers are over-paid hacks who deserve to stave to death.

I am asked by a reporter 'what I think is going to happen?'. I say "I am optimistic that once the studios understand how serious we all are, this will end. I don't know how long that will take. " What I don't say is this: I know there are forces that would like to break the union, and would love to write-off a dubious TV season, and kill some lucrative deals, and a long strike is just the way to do it. But it's not just the writers. In a few weeks, my own show, Brothers & Sisters will run out of pages, like a train running out of track, and all the crew people are going to go home. Until this is settled. It's not a game at all. Not for a second. No matter the mood today. No more words = No more jobs. Simple math. Horrible.

At one PM, Ron Rifkin and I walk away, and have some lunch. But not before he explains to a French journalist, in perfect French, that he is here "because without the word, what is there?...There is nothing..." It is capped by a perfect Gallic shrug, as good as any Parisian who knows the truth is the truth is the truth. C'est la guerre.