Robert Fulton's steamboat first chugged up the Hudson River in August, 1807. The flat-bottomed boat, which was only 12 feet wide, was fitted with side wheels and powered by a coal-fired steam engine. It clocked an impressive four to five miles per hour against the current and made the 150-mile trip from New York to Albany in about 32 hours. 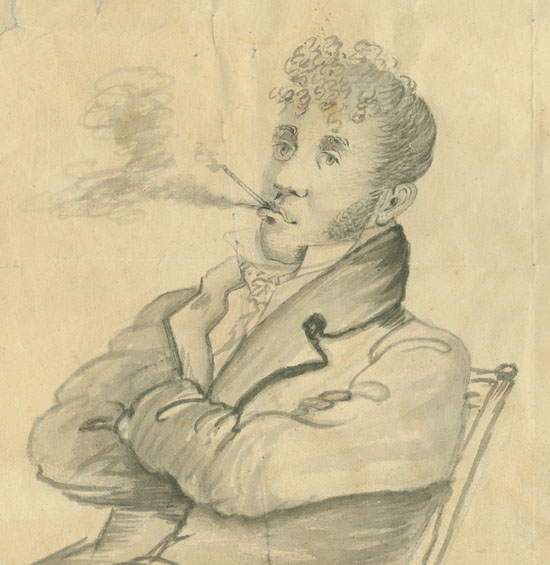 Self portrait by Robert Fulton, nicknamed "Quicksilver Bob" by his schoolfellows.

Fulton was not the first to build a steam-powered vessel -- one early model was launched in 1704 by the French inventor Denis Papin (who also developed a pressure cooker). But Fulton was the first to find commercial success with the idea. In 1802, he began collaborating with Robert Livingston, who already held exclusive rights to operate steamboats in New York State, and five years later the weekly New York to Albany route was established. The steamer's first voyage went entirely unnoticed in the New York papers until after Fulton returned to the city and penned a letter to the editor of the American Citizen.

Shortly thereafter, however, rival steamboat developers began popping up. In 1808, the Winans brothers began operating a steamboat in Vermont; in 1809, John Molson started running a steamer from Quebec to Montreal; and even Livingston's brother-in-law John Stevens proved to be a rival. Fulton and Livingston rapidly expanded their operations and controlled steamboats on several rivers, but by 1813 it seems that Fulton felt the need to defend his commercial interests. 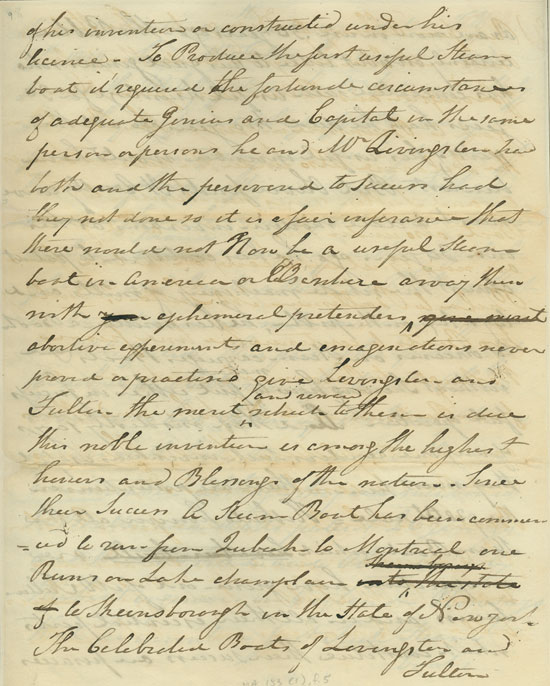 This essay, which is entirely in Fulton's hand, gives the history of his steamboat and argues that other steamboat developers have essentially copied his inventions and improvements, concluding (about half-way down the page above), "Away then with ephemeral pretenders, abortive experiments and imaginations never proved or practiced. Give Livingston and Fulton the merit and reward which to them is due. This noble invention is among the highest blessings of the water."

Fulton's steamboats did of course go on to change the face of the American landscape and revolutionize travel and commerce. Steamboat traffic dominated the Erie Canal and the Mississippi River for most of the 19th century, right in to the 20th, and Mark Twain, our most famous literary steamboat pilot, famously stated "I am a person who would quit authorizing in a minute to go to piloting, if the madam would stand it. I would rather sink a steamboat than eat, any time."

For more information about Robert Fulton's manuscript and self portrait, click here.