The noise is so loud, Kollyn Zeder often doesn't let the children in her home daycare play outside, worried it might damage their hearing. Windows stay shut, even though she wants fresh air. Often she can't hear her own TV.

The noise from Naval Air Station Oceana, a master jet base in Virginia Beach, Virginia, dominates almost every aspect of her life. And new studies say it may be affecting her health in ways she doesn't realize. While her situation is extreme, her plight typifies what many Americans in urban settings endure: constant loud noise with little recourse for stopping it and few policies for controlling it in the first place.

The U.S. lags behind Europe in taking noise seriously as a public health and quality of life issue even as new studies show noise increases risk for coronary heart disease and hypertension. As the number of urban residents skyrockets, it's becoming an increasingly important public health issue: the world's urban population is going to more than double over the next roughly 100 years with 75-80 percent of people eventually living in cities, according to the New York University Stern Urbanization Project.

"With increasing urbanization, we have more noise," said Rick Neitzel, assistant professor of Environmental Health Sciences at the University of Michigan School of Public Health. "In this country, we don't place a lot of value on hearing and the ability to hear. Maybe we don't care about our hearing, but we don't want to have a heart attack."

One sign noise is getting more attention is work being done by Nirupama Bulusu, an associate professor of computer science at Portland State University. She is developing an app to map urban noise pollution using smartphones. Urban planners will be able to use Ear-Phone data collected from people's phones to make decisions about roads and light rail as well as residential and commercial development.

"It's the modern smartphone as a critical sensor," said Bulusu. "If you can use it to monitor noise pollution and air pollution...it can be incredibly transformative."

The sound of revving engines pours through one San Francisco resident's single-pane windows overlooking Route 101, making it so difficult to sleep, he is desperate to leave.

"You can have all the money in the world but if you don't have peace and quiet, you're in trouble," said Philip, who didn't want his last name used. "When you're sitting down in the evening after a long day of work and you hear the hum of traffic and car horns and people shouting, it doesn't make life fun." 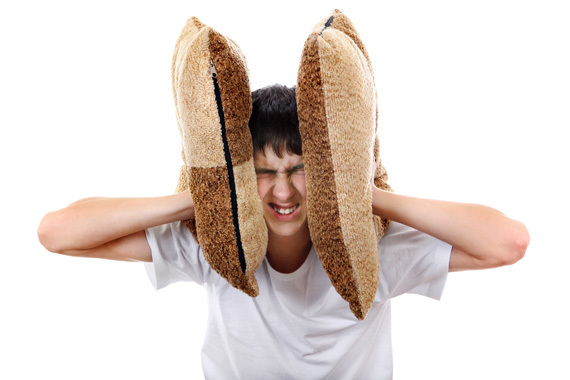 Windows are typically the place where outside sound enters more than anything else, said Brian Atkinson with Acoustics by Design in Michigan whose president heads the National Council of Acoustical Consultants.

If you live near a road, you're at risk for hypertension and heart attack, Neitzel said. Public health officials used to blame air pollution. Now they're realizing most air pollution has noise associated with it.

The question is being asked: "What fraction of this public health burden of cardiovascular disease is related to noise?" he said.

Even if people can sleep in loud environments, their cardiovascular system doesn't get used to it, he noted in a co-authored Environmental Health Perspectives report last year. Their sympathetic nervous system still reacts and they can be forced from deep sleep to a lighter stage.

Devon Paldi, Au.D., an Oregon Health & Science University audiologist, said people often aren't conscious of noise exposure, but once they see a doctor for hearing loss, they say, "I always worked in a noisy environment. I know I should have worn hearing protection more diligently."

The U.S. EPA recommends a 24-hour exposure limit of 55 A-weighted decibels (dBA) to protect the public from adverse health effects in residential areas and a 70 dBA limit to prevent hearing loss.

Neitzel's report estimated 104 million Americans experience limits greater than 70 and tens of millions more are at risk of heart disease and other health impacts.

Neitzel calls the situation in the U.S. a "travesty." In the early 1970s, the U.S. Environmental Protection Agency was charged with reducing noise exposure, recognizing it as a pervasive form of pollution.

Over the next decade, it became a world leader in noise exposure research. But the Office of Noise Abatement and Control was defunded in 1982 at the start of the Reagan administration. Responsibility was shifted to state and local governments.

"We need to re-establish noise as a serious issue on a federal level," said Paul van Orden, noise control officer in Portland, Oregon. "Almost every other country deals with this in a more comprehensive fashion."

At international conferences, he rarely sees any U.S. government representatives and his peers are typically from the Netherlands, Japan and Germany.

Portland's noise code is still one of the nation's best urban noise codes and will celebrate next year its 40th anniversary as the first comprehensive one in the U.S.

Good sound noise data - like what Bulusu at Portland State is hoping to get - would help those in low-income neighborhoods have a stronger voice in addressing potential noise pollution like the location of a trucking terminal. But, "even in Portland, (noise) is one of the last things to get considered," van Orden said.

Because of increasing urbanization, noise pollution will only worsen and affect more people. Neitzel at the University of Michigan says policy leaders can craft solutions. For starters, the U.S. National Prevention Strategy - tasked with increasing the number of healthy Americans through wellness and prevention - can put noise on the national health policy agenda. Other changes should include:

"If we understand the health effects go beyond hearing loss, this becomes a pressing issue we need to deal with."

Carrie Sturrock is a writer and company storyteller for Indow in Portland, Oregon.