Jeffrey Scott Gould was only 7 years old when he discovered one of his first sound triggers. He was taking a test and the kid sitting behind him kept sniffling. Simple sniffles could keep Jeff from learning. Since that time additional unbearable triggering sounds have been added to the list. There's chewing and crunching, and then there's the sound of someone plodding along in flip-flops. He recalls once asking his step-mom as a teen to leave the carrots out the salad at dinner. And then there's the time he confronted his sister about her loud tortilla chip crunching. The response was never good. To Jeff's dismay the list of sounds that cause him difficulty continued to grow.

The word "misophonia" can literally be translated as "hatred of sound." But how does one come to hate sound? Certainly we all have our own lists of things that annoy us, but misophonia is different. Many living with it describe it as almost painful and worsening or expanding over time. Jeff describes it as a condition that makes one "sensitive to certain sounds that cause a physiological reaction." In his case he experiences an adrenaline release, along with increased heart-rate, and a feeling of rage that needs to be released. He knows a response like that to everyday sound is not logical and laments it's also not something he can control by "thinking his way out of it."

Gould was in his 30's when a friend told him about a 20/20 segment featuring misophonia. He describes his experience watching that tv segment as "life changing." After years of living with the condition he was elated to know that it was more than a quirk, and that there were other people just like him. Once he realized his nemesis has a name, he also knew it was time to marry his two loves-- filming documentaries and educating people about misophonia.

He remembers growing up with hopes of becoming an architect. That was until his mother gave him his grandfather's old 8mm camera. From there he took a high school film class under favorite teacher Jerry Hochburg who nurtured his interests, and talents and encouraged him on a path leading him to where he is today.

So where is he? Jeffrey Scott Gould founded Action Media Production, has quite a film resume, and has produced an impressive list of documentaries, his favorite film genre. Thanks to an effective crowd-funding campaign, generous donors (most of whom live with misophonia), old friends, and new ones, he's about to premiere a new labor of love-- a documentary about misophonia called, "Quiet Please..." The film is certain to grab attention, and to change perceptions along the way. 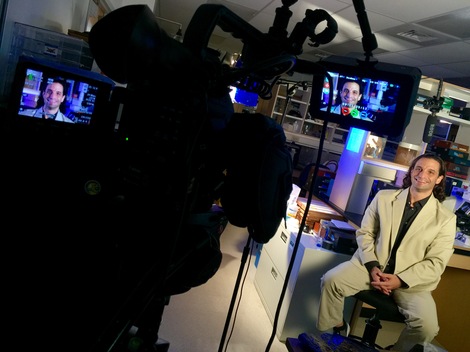 Changing perception is a small component of the purpose of the film, but it's important because misophonia as a condition is not without scoffers and detractors even among friends and family. Jeff describes releasing the trailer and sharing it with the world as sort of a coming out.

His condition was then out there for everyone to consider or criticize. Some people expressed shock. Others were supportive. Some were actually sad. Then there were those who remained silent not knowing exactly what to think, but Jeff says he doesn't push. He wants the film to speak for itself. Or rather, he wants the people who put themselves out there by sharing their stories in the film to speak for themselves. After all he suggests, "When you try to force something, it's not genuine, but once the timing is right, and the passion is there, there's no going back."

In the last year, Jeff has traveled the country interviewing people who live daily with misophonia, or those who research it. Those with misophonia have similar struggles defined with different circumstances effecting their relationships, work, or overall life enjoyment. 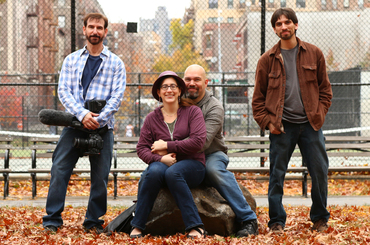 (Jeffrey Scott Gould (left) filmed Paul and Ana Tabachneck (Center) in Bronx along with Production Assistant, Chris Insignares (right). The Tabachneks both appear in the film as does Paul's music)

For Jeff, "Quiet Please..." is certainly a product of love and affection for filmmaking, but it's also much more than that. "I wanted to make a difference in the only way I knew how--through film and storytelling. In this instance, I'm not some random interviewer asking a question and moving on.

I relate to what most people tell me about their stories, and that was the most amazing part. People were talking, but my words were coming out of their mouths. It's incredible, and cathartic."

Most documentaries don't end up in mainstream theaters and Jeff's ok with that. He knows he has a built-in audience who will probably promote the film fueled from their own life experiences, but he's not counting on that alone. He knows getting the film completed and releasing it is only the beginning.

One of his goals is to reach those people still dealing with misophonia on their own--those who haven't realized there are thousands more people like themselves dealing with this mysterious thing that actually now has a name. But he also suggests that the film goes beyond misophonia and may have some relational appeal. After all, any successful relationship requires compromise, acceptance, understanding, compassion, and commitment, so the film is full of life lessons.

Jeff is quick to admit he hates the way misophonia takes over his mind and body causing him to react negatively to the people he loves and cares about. He hates when "hate" wins. There are rare times when the triggers are absent, and he can even forget he has it, but it's always there. If he hasn't slept or he's already stressed, the slightest sound can push him over the edge. That's not what he wants. That's not what anyone with misophonia wants. Hopefully the film will effectively convey that message to those who have never heard of it.

Jeff's hoping to screen in a variety of venues like classrooms, universities, film festivals, and special events, and ultimately he would love to see the film screened on PBS.

There are two private screenings of "Quiet Please..." this summer before the full release. The first is Saturday June 18th in SoHo, New York City. A second follow-up private screening is scheduled for July 20th in Asbury Park.

I write and speak about Leadership, Learning, and Life.