Having grown up in the Eighties, I am fortunate to consider myself part of the MTV Generation. From the second that rocket ship was set into space, that astronaut planted that flag on the moon, that guitar riff played in the background, I was hooked. 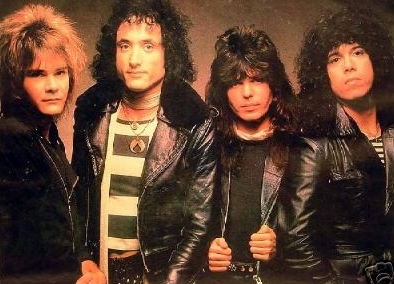 Metal health began to drive me mad as I became interested in a different kind of guy with long hair.

Thirty-plus years later Quiet Riot is back with new music, new tour dates and a documentary film that was just released on DVD. Quiet Riot: Well Now You're Here, There's No Way Back tells the story of the history of the band, the rise and fall of Quiet Riot, the death of lead singer Kevin DuBrow and the struggle drummer Frankie Banali has in dealing with all of the above in his quest to put the band back together again. 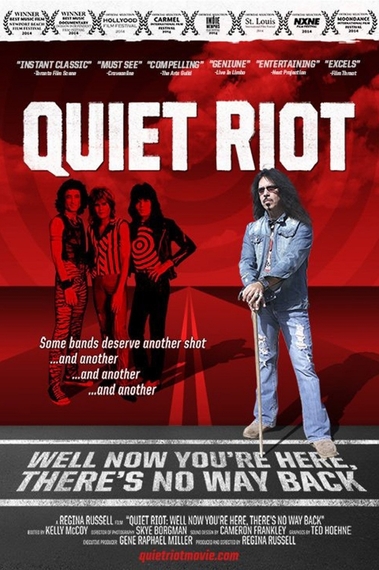 You wouldn't expect a documentary about a metal band from the early '80s to be as touching and have as much humanity as this film does.

If you're quick to write off Quiet Riot as a two-hit-wonder you'll learn of their importance in the world of metal as they were pioneers -- Metal Health was the first heavy metal debut album to ever reach number one in the US, opening the floodgates for countless other hard rock/metal bands to do the same.

The heart and soul of the movie belong to Banali -- we witness his struggle as he makes the decision to reform Quiet Riot, something that seems impossible after the loss of his best friend Kevin DuBrow, who died of an overdose in 2007.

Director Regina Russell takes us on a rock and roll ride with a front row seat. We feel Frankie's pain. We watch him play tiny clubs and well as huge festivals. We go along with him on the mundane things in life; grocery shopping, carpools to school with his kid -- the everyday "stuff".

He explains through tears that "this is what I do, this is what I know..." you feel for him, and root for him. It's something that any of us who have had a dream or have wanted something so badly it hurts can relate to. We want him to win.

I spoke with Frankie and Regina about the film, their relationship (they are engaged to be married) and what it was like to make this movie together.

Regina, what brought on your interest in filmmaking, especially documentary filmmaking? Was it Frankie's story?
Regina: I was on film sets my entire adult life and I've learned the craft of film making like a lot of actors do, you see a lot of actors that become directors and I naturally gravitated toward that myself. I never really had that perfect story and when Frankie called me and said he was gonna put the band back together, I just thought well...that could be a great story for a documentary.

I know you two are a couple -- was it hard to balance the film and your relationship at the same time while you were shooting? Was that difficult or challenging?
Regina: At some points it was, most of the time it wasn't but at some points it was because when you have somebody in your life that's your best friend that you tell everything to, and when something bad is happening or you're having an emotional moment and the person is not only there listening but they're filming it; it's a little awkward. I definitely felt the pressure to put the camera down and have this conversation about this but I felt like I need to film this now and we'll talk about it later, so it was awkward at some points.

Frankie: It was difficult, because during the whole filming process the stuff that was historical, part of the archives and all that, that was all said and done and already part of the history but at the same time she was filming in real time, and it was a constant struggle for me to keep the "S.S. Quiet Riot" afloat, so on some of those bad days I essentially had no one to listen to me; I had someone to record it, and that's a very difficult thing because I know Regina was sympathetic but I know her number one objective at that point was to capture whatever was happening so I didn't have that soft ear, I had the hard lens instead.

Regina: I kind of became like an obsessed person that just wanted to film him.

You must have always had that camera going in your head then.
Regina: Yeah, I tried to order spy glasses. Seriously...I found out that you could get them and I tried to order a pair but I didn't know that they were coming from China and it's illegal to have them in America and they got stuck in customs.

Frankie: They got stopped at customs so for about two months I didn't get any of my mail because I'm assuming that the government scrutinizing every piece of mail that was coming through.

The movie does such a great job at giving the audience a peek into metal back in the '80s. That must have been the most amazing time of your life.
Frankie: Well, you know the amazing things for me about it is that most musicians when they start and they get into a band and they're taken seriously and they start to play, you always have that dream that you're gonna make it and that it's gonna be like all those bands that you're fan of, and that it's gonna be all great but you know, in the back of your mind as hard as you try, there's a percentile for succeeding that's very small. You want it to happen and you don't think it's gonna happen and then when it happens it's amazing, but you also don't know what to do with it because there is no blueprint for it so there was a learning curve that entire time.

Frankie, the movie touches quite a bit on the losses you've had in your life, from your mom to your wife, to your best friend and your band. In bringing the band back, when you're going through all those hardships, what kept you going during the dark times?
Frankie: I was brought up in New York and I was brought up with the mentality that you can do anything that you set out to do. The luxury of giving up was not something that was part of my DNA, was not the way I was brought up so anytime I hit a wall I either crushed the wall, or jumped over it, or figured out a way to get around it and kept going, because if you give up you have nothing. If you continue on you have the hope of getting something. Giving up is not really something that I do.

You say in the movie when you're struggling with the idea of reforming the band something to the effect of 'this is what I do, this is what I know.' The fans are pretty happy you've kept going.
Frankie: Well that's the heart of the matter. I mean, it is what I do. It's what I've done literally since I was fourteen when I first started to play. I just never looked back, I just kept going, it's just a natural thing for me to do. To do music and not take no for an answer.

Regina, did you know that when you started filming that the movie would become much more than a documentary about Quiet Riot finding their new singer? Did you know it would be such an emotional and touching movie?
Regina: No. I really didn't know where it was going and I did not know what I was in for. At all. I thought I was gonna film for a few months and they'd get a new singer and maybe the first show would be the end of the movie. And that most of it would be historical and then it started getting really interesting. So I just kept following the story. I definitely had no idea how long it would take and where it was going to go.

The audition scenes, where you were auditioning the singers; that was kind of brutal to watch on film, it must have been even more so sitting in the room.
Frankie: These people who come in to audition had no idea they were actually auditioning for Quiet Riot. So we were in the room first, they never saw us until they came in. It was interesting. Some of it was a little funny, some of it was uncomfortable but none of it was boring.

Well Now You're Here, There's No Way Back is now available on DVD here.