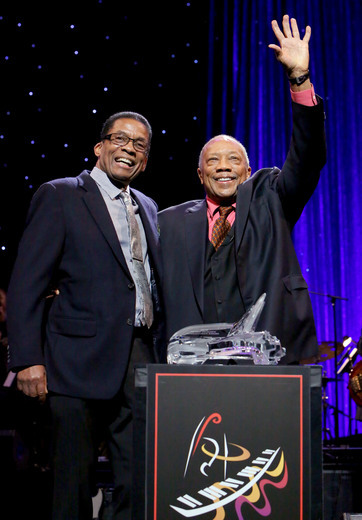 Herbie Hancock opened the event, Seth MacFarlane impressed the crowd with dulcet tones belting out two jazz standards, Jeff Goldblum, Billy Dee Williams and Kareem Abdul-Jabbar, all expressed their admiration for Quincy Jones as did many titans of the jazz world who played and sang through the evening.

Jones, a veritable force of nature at 82, spoke in resolute tones about his gratitude for a lifetime of mentors and dear friends from Ray Charles, who befriended him at 13 when Charles was 16, to Count Basie taking him under his wing as well as Dizzy Gillespie. "I knew these cats before electricity," he said to laughter. "Ray taught me how to make arrangements. Jazz opened up a great new world and my love affair with her has lasted six decades and it is just beginning," he said.

Jones rose through the ranks of the musical world as a trumpet player in Lionel Hampton's band at 18. "That was like going to college," he has said. Then he played and was musical director for Dizzie Gillespie's band, then became an arranger and producer for Ray Charles and other important artists including Frank Sinatra, Count Basie, Shirley Horn, Louis Armstrong, Aretha Franklin, Peggy lee, Michael Jackson, and the list goes on.

The all time most nominated Grammy Award artist with a total of 79 nominations and 27 awards, Jones was the first African American (and his writing partner) to be nominated for an Academy Award for best song, and in the same year Jones was the first African American composer nominated for Best Original Score (In Cold Blood). He has received 7 Academy Award nominations over a career composing 33 motion picture scores including The Color Purple. He was the producer of many albums including Thriller and Bad, by Michael Jackson. Thriller to this day is the biggest selling album in history. He also became a television and film producer (he had a 10 pic deal with WB in the 80s) and was the musical producer of The Wiz, produced The Fresh Prince of Bel Air and discovered Will Smith, as well as producing MAD TV for a 14 season run and produced the charity single 'We Are The World'. Considered the most powerful record producer of his time, he was voted by Time Magazine as one of the most influential jazz artists of the 20th century.

As Herbie Hancock said that night, 'the last six decades are infused with his DNA, his life story is our musical history." 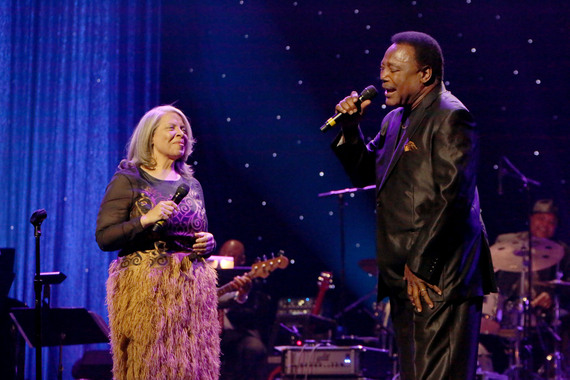 Arturo Sandoval, and flautist Hubert Laws, saxophonist Jimmy Heath and Dave Grusin, titans of the jazz world recognized for their mastery played through the evening with award winning singers including Patti Austin, Dee Dee Bridgewater, George Benson, Luciana Souza, Freddy Cole and Al Al Jarreau. Herbie Hancock played his original piece 'Lullabye' to the delight of the crowd as well. It was an extraordinary evening with the jazz world's top talent.

Taking stage after many acts, the stellar performances from Patti Austin and Dee Dee Bridgewater, brought the house down. Patti Austin's duet with George Benson that was a lover's spat in scat improv, was a show stopper. 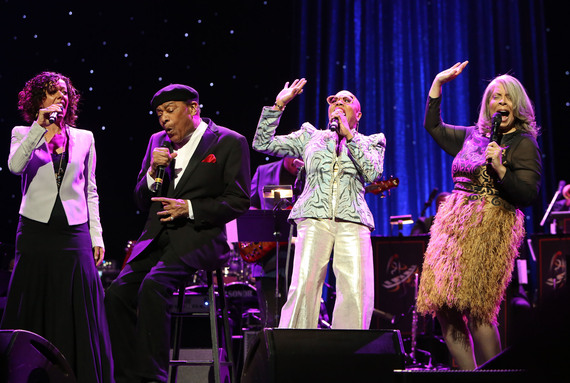 Music doesn't recognize color, race, or gender. 'Can you play?' That was the only question. We've had 12 notes for the last 700 years. You realize that? The jazz bebop was about a serious revolution. More than a style, it was a wavelength. It signaled a change of mind.


Jones said how that revolution started with Parker's Birdland. Gillespie, Coltrane, Jimmy Heath and others followed. And Jones was in the middle of it all. He still had advice for young performers; "That's when God walks out of the room, when you think about what makes money."

The evening was also when the Thelonious Jazz Institute could shine. Widely regarded as the world's most prestigious jazz competition, each year this contest features a different musical instrument and major scholarships and prizes are awarded to talented young musicians. For 28 years the competition has launched musical careers and the Institute gives scholarships to over 3000 high schools country wide. Seven of the musicians in the big band onstage attend the Thelonious Monk Institute of Jazz Performance graduate level college program, at the UCLA Herb Alpert School of Music.

The evening celebrated three finalists of the jazz vocal competition, selected from 10 semi-finalists in competition the day before. They were vying for a $25,000 scholarships and a recording contract. The winner of the evening, Jazzmeia Horn, who's rendition of 'Moan' a jazz standard, was superb, was handed her scholarship check by John Burk, President of Concord Music Group who also awards the recording contract. 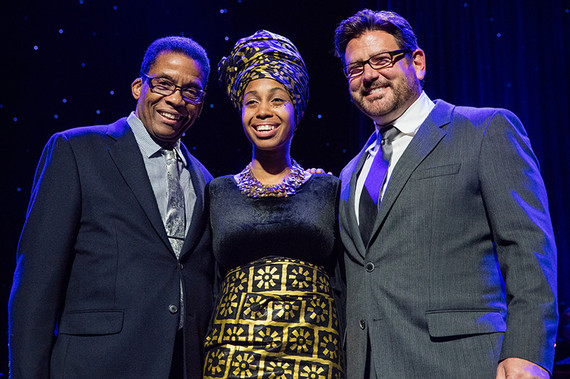 Jones closed his acceptance with thoughts that the U.S. is one of the only countries in the world that doesn't have a cultural ambassador. He shared his concern for how many young musicians don't know the only indigenous music of this country, jazz, is a straight line from jazz to bebop, to doowop, to hip hop and how direct it is.

That musical education is crucial for emerging artists as we all stand on the shoulders of those that come before us, and how important it is to learn from, respect and build on that legacy. Everything is rhythm and blues. Basie, Bird and Bo Diddley are our Chopin, Mozart and Bach.

For more on the Thelonius Monk Institute.