We've ingested many hard-to-pronounce ingredients in our lives, and quinine is definitely one of them. Pronounced kwahy-nahyn, this bitter alkaloid isn't one of those suspicious, scary ingredients lurking in your favorite gummy candies -- actually, we have quinine to thank for our favorite cocktail, the gin and tonic (among other things).

Quinine was originally used as a malaria treatment during the days of colonial India. Naturally found in the bark of the cinchona tree found in the Peruvian Andes, one legend of its discovery claims that a South American Indian suffering from malaria took a drink from a pool of water contaminated with cinchona tree and it cured his fever. Regardless of exactly how it was discovered, the first documentation of its use as malaria is recorded in 1630 in Peru. It continued to be used for its antimalarial properties until the 1920s, when other drugs with fewer side effects took its place, like chloroquine. That's almost 300 years of use. And somewhere along the way, quinine found its way into our cocktails.

We spoke to Jordan Silbert -- founder of the fancy soda and tonic company, Q Drinks -- and here's how he recounts quinine's transition from treatment to cocktail:

In 1825 clever -- or drunk, depending on how you look at it -- British officers in the Indian Army improved this bitter medicine by mixing it with soda water, sugar, and gin. Instead of drinking the medicine with their troops at dawn, the officers figured out how to enjoy it at cocktail hour. The original gin and tonic was born, and it soon became the quintessential drink of the British Empire.

Today, quinine is rarely used for medicinal purposes. The FDA recently banned its use as a cure for leg cramps due to the negative side effects that can result from ingesting large amounts, such as headaches and fever. Some bad reactions to quinine have even been fatal.

Scary, we know. But don't let that deter you from ordering a gin and tonic next time you're at the bar, because tonic water contains very low levels of quinine. A glass of tonic water holds roughly 20 mg of quinine, whereas a dose for the treatment of leg cramps would be in the 200 to 300 mg range.

What you should do instead is find a bar near you that has a black light and order yourself a tonic cocktail to revel in its beautiful, iridescent blue glow thanks to its fluorescence quantum yield. (You'll have to look that one up.) That's right folks, not only does quinine treat malaria, but it knows how to party, too. 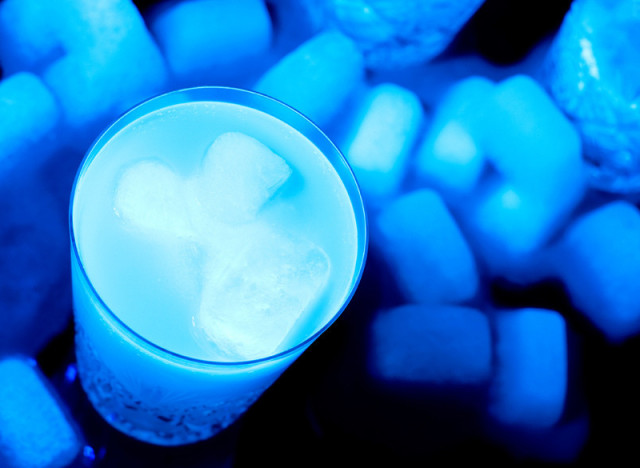