The Department of Defense would be required to permit journalists to photograph military commemoration ceremonies and memorial services for soldiers who have died on active duty and when their caskets arrive at military installations in the United States under a bill introduced last month by Republican Congressman Walter B. Jones of North Carolina.

The bill, which was referred to the House Committee on Armed Services and currently has no counterpart in the Senate, would go far to undo the impenetrable cloak under which the Pentagon has hidden the ravages of combat from the American public since the 1991 Gulf War.

It is unclear what the purported justification for the outright ban is: there cannot possibly be any security reason for hiding flag-draped coffins from the eyes of the American public. And families cannot legitimately claim privacy interests since the remains and the coffins are not identified.

The sole purpose for banning photos of returning dead soldiers -- through seven years of war in Afghanistan and Iraq and 4,700 American casualties -- is to manipulate public opinion by shielding U.S. citizens from the horror and cruelty of the deaths of young men and women in an increasingly indefensible cause.

The Pentagon is not stupid. They recognize the profound impact that the televised coverage of the Vietnam conflict had -- gory and horrendous footage every evening on the news in our living rooms -- in turning the American public's opinion against that war and forcing Lyndon Johnson from office. Determined to never let that happen again, they imposed a ban during the Gulf War in 1991 on photographing returning military dead at Dover Air Force Base. That, coupled with the more recent embedding of press photographers in the field under the watchful eyes of military officers, provided an impermeable shield, protecting our eyes from any visible proof that soldiers actually die in wars.

Updated in 2003, the policy states, "There will be no arrival ceremonies for, or media coverage of, deceased military personnel returning or departing from Ramstein Air Base or Dover Air Force Base." And the justification has ostensibly been respect for the soldiers and their families.

In introducing the "Fallen Heroes Commemoration Act," with six co-sponsors, Jones, who initially backed authorization of the Iraq war, said, "Without a loved one serving in the military, it is sometimes possible for Americans to overlook the sacrifices that have been made -- and continue to be made, by members of our Armed Forces on behalf of our Nation.

"By once again permitting access to accredited members of the media at military commemoration ceremonies, memorial services conducted by the Armed Forces, and the arrival of the remains of fallen service members at U.S. military installations, this legislation would honor those who have given their lives in defense of our Nation."

Jones said he hopes to hold a hearing in September on the bill, which last week drew the support of the National Press Photographers Association.

(In 2004, The Seattle Times published a stunningly effective but still dignified photo of flag-draped coffins in a plane at the Kuwait International Airport, which was taken surreptitiously by Tami Silicio, an employee of a defense contractor. Silicio was shortly afterward fired from her job.) 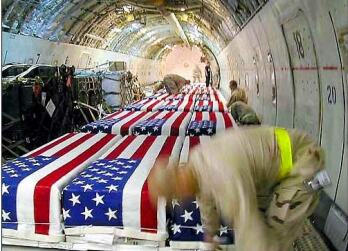 Obviously, there is no reason, aside from naked manipulation of public opinion (the "ignorance-is-bliss" theory) to prevent news photographers from documenting the return of flag-draped caskets to the United States. Somehow, the Pentagon believes that if you don't see 'em, they don't really exist - or at least not in the minds of the American public. This charade has gone on long enough and it is time that Congress restores the trust in the American people they deserve: to have the facts and form opinions based on those facts. Not to sanitize the consequences of war, so that maybe we'll forget what it's all about.

Professor of Journalism Law and Ethics