Usually, they assume I never acquired a taste for the bitter, caffeinated elixir. Far from it. Five years ago, when I worked as a barista in a café on Boston’s posh Newbury Street, I was hooked. I'd pound up to 12 shots of diesel-strong espresso in a single 8-hour shift, springing from the milk steamer to the bean grinder like Popeye the Sailor after a can of spinach.

That all changed when I started my first full-time desk job. Confined to a chair, coffee became too much. I was jittery and unfocused, and I'd crash from the caffeine high well before the day was over. The energy roller coaster killed my productivity. Worse, I started to feel anxious every time I drank coffee for pleasure.

A little over a year ago, I quit cold turkey. Save for two slip-ups, both of which were after-dinner cocktails mixed with Grand Marnier or Irish whiskey, I haven't had a sip of espresso, drip or French-pressed coffee. And I did it all without the help of a 12-step program. (Yes, those exist for serious caffeine addicts.) I managed to stay on the wagon even amid the stress of starting a new job last March, for which I wake up at 5:30 a.m. each day.

“Are you serious?” a woman I went on a brunch date with just last weekend said to me as I ordered an Earl Grey. “I could never do that.”

But she could. Anyone could! To counter the need for a powerful caffeine kick each morning, I simply had to tweak some personal behaviors, which ultimately have made me a much healthier, more productive and more emotionally grounded person.

I now have a bedtime.

Until recently, I prided myself on being a “serendipitous sleeper,” which is really just a euphemism for “inconsistent insomniac.” Being awake at the witching hours of the night provided a certain type of solitude that is hard to come by. My time was mine entirely, and there were no interruptions except by fellow insomniacs or friends in vastly different time zones. That may have worked when I was a caffeine fiend -- and 19 years old -- but the routine left me exhausted.

Now, I try to go to bed no later than 11 p.m. on weeknights. When I don’t feel tired, I take a melatonin pill or turn on my fan to let the white noise soothe me to sleep. By the time my first alarm goes off at 5:30 a.m., I usually feel refreshed. It also leaves me enough time that if I need an extra half-hour of shut-eye, I can take it and still get from my apartment in Brooklyn’s Bed-Stuy neighborhood to my office in Manhattan’s East Village by 7:30 a.m.

I drink a lot of green tea.

As I reduced my caffeine dependence, I decided I’d switch to green tea, which typically contains less caffeine than black tea. Though the leaves come from the same plant, the drying and aging process creates different levels of caffeine. 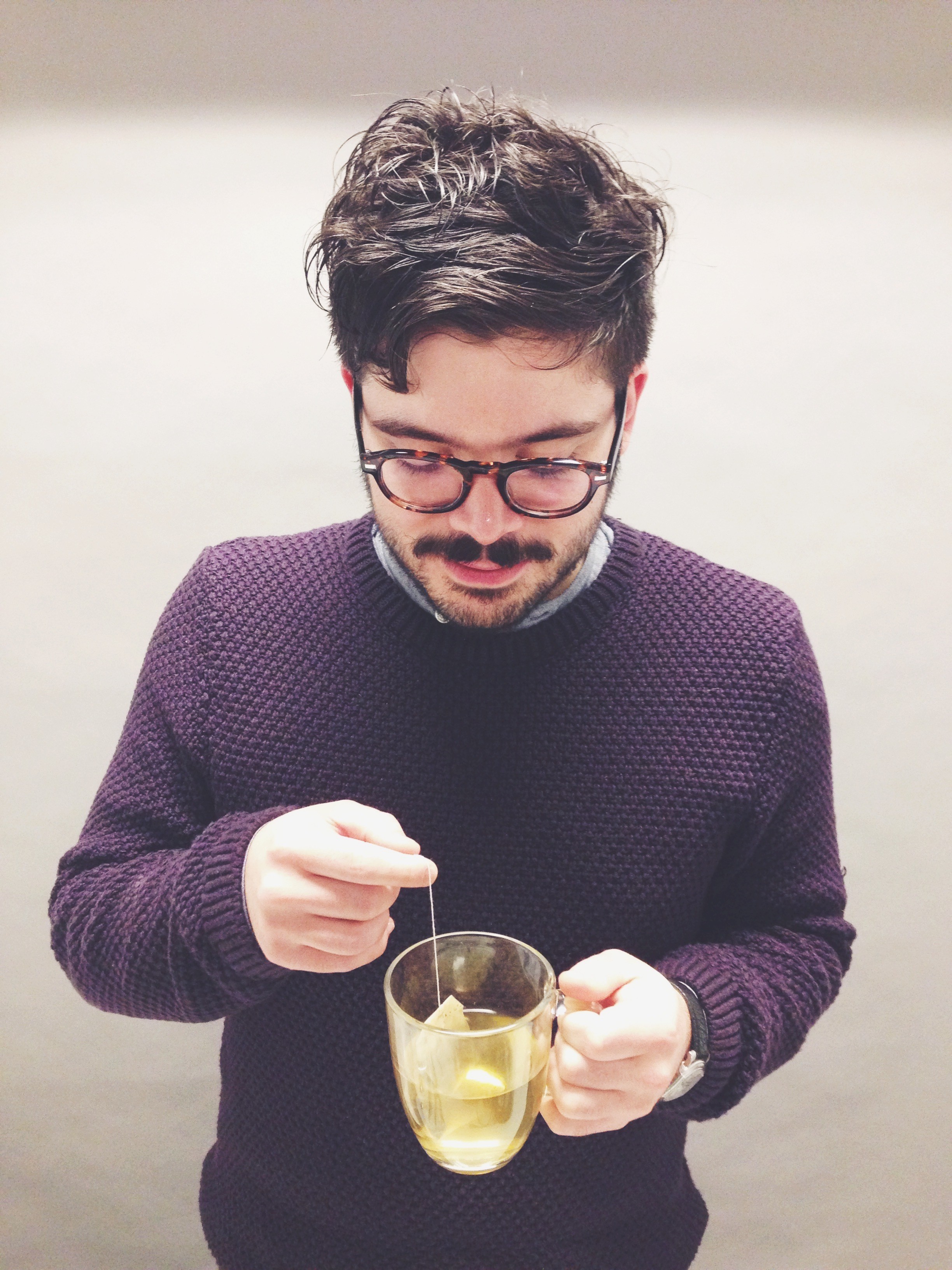 Green tea has between 24 and 45 milligrams of caffeine per serving, according to the Mayo Clinic. By comparison, black tea, which includes such strains as English breakfast tea and Earl Grey, contains up to 70 mg. A cup of coffee has between 95 and 200 mg.

I regularly drink up to five cups of the green stuff while at work, sipping throughout the day.

I’m not alone in making this switch. PANATEA, a New York-based company that sells Japanese fine-ground green tea called matcha, was founded by a couple who began having the same symptoms I felt from drinking coffee. Matcha can keep energy levels up for 3-6 hours with only 34 milligrams of caffeine, about one-third of a cup of coffee. It also contains L-Theanine, an amino acid that provides a feeling of “calm alertness.”

The green tea routine also allows me to keep black tea as an option when I’m not able to sleep enough. In fact, as I write this sentence now, I’m sipping a cup of Irish breakfast tea, having needed an extra boost after returning home late from a Monday night dinner party.

Food comas can be the worst drag on productivity. Trust me, there are few things I love more than rewarding myself with a midday bowl of noodles or a lamb-stuffed banh mi sandwich for lunch. But my interviews, meetings or stories after that meal will suffer.

“Getting lethargic after a meal is relatively common,” O’Connor said.

A 2010 study found starvation nearly tripled the amount of time sleep-deprived fruit flies could survive. The insects became more focused and alert when their food was taken away. Their brains were determined to find food sources.

Obviously this is an extreme example. But I've found that by letting myself experience just a little bit of hunger, I get better work done. That doesn’t mean I don’t eat -- I just eat several light meals throughout the day, instead of a three big ones. On a typical morning, I eat a piece of fruit on my way to work. Once in the office, I sup on a handful or two of raw almonds. By mid-morning, I’ll peel a banana or an orange. For lunch, I’ll either eat something light, such as a salad, or half a sandwich around noon and the other half a few hours later, when I feel hunger pangs yet again.

Perhaps one of the best perks in The Huffington Post’s New York headquarters is the small gym we have in the office. When I’m finding it hard to focus or stay awake, I will sometimes take a half-hour break and go for a quick run. Between the endorphins released by sweating and my increased heart rate, it can be a useful remedy.

This is nothing new. Research from 2006 found that regular exercise could increase energy levels among people suffering from fatigue caused by chronic medical conditions, such as cancer or heart disease.

But an in-office workout doesn’t require a treadmill.

No, I don't really run in my regular clothes.

“A lot of workers have stairs in their building,” O’Connor said. “If they just go up a couple flights of stairs, that’s significant activity for them and that would have an effect.”

A stroll around the neighborhood helps, too. 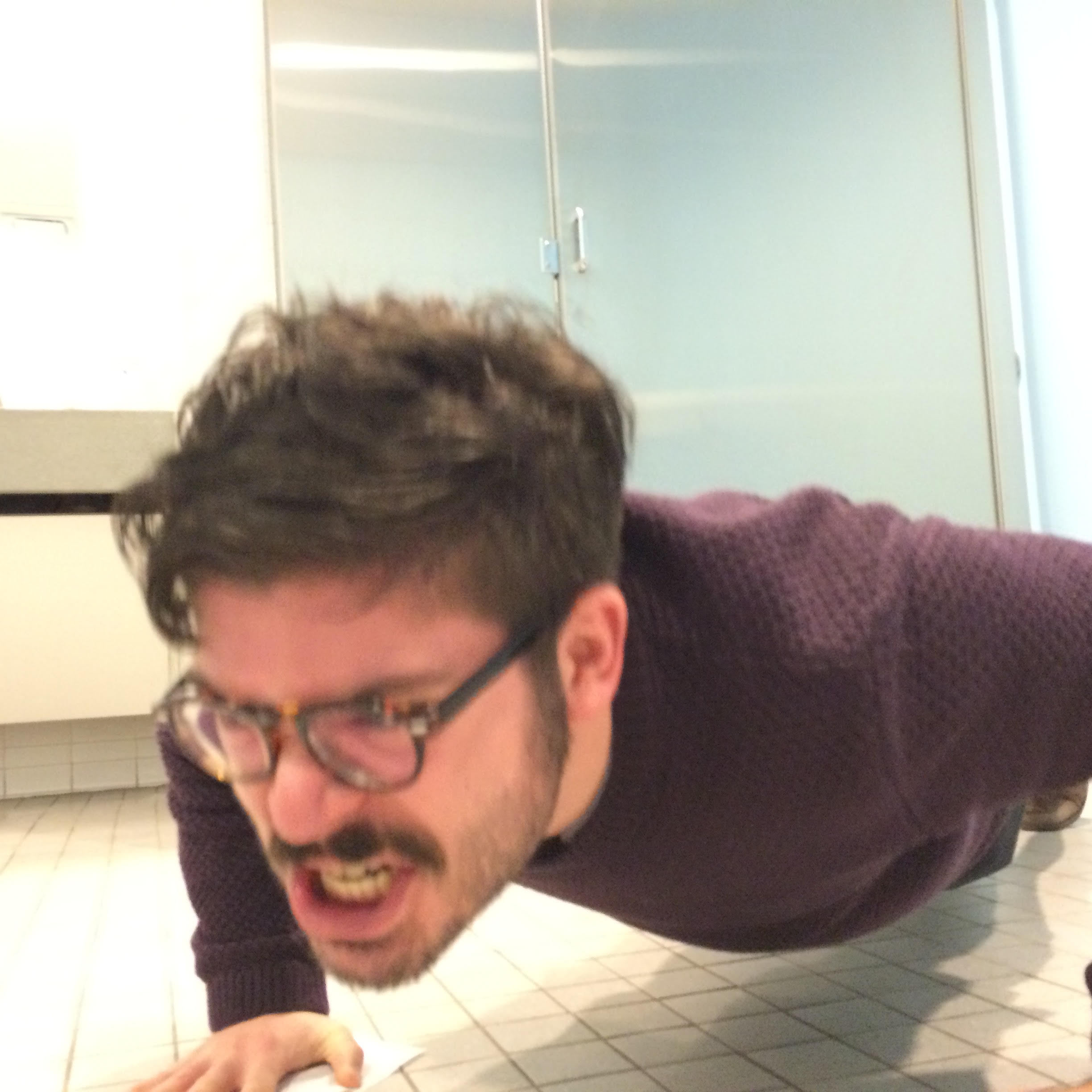 Getting SO pumped up. (Photo credit: Damon Beres/The Huffington Post)

There’s also something I call the B90X. The B stands for bathroom. Back when I worked for a small news site in Los Angeles, taking a walk in the neighborhood could be too much in the blistering sun. So, when I felt my eyelids growing heavy, I’d go in the bathroom, put the fan on and do 60 seconds of jumping jacks followed by 30 seconds of push-ups. (I put toilet paper on my hands before placing them on the floor.) This technique works best in a single-person bathroom, for obvious reasons. But be forewarned: You may need to take an extra 30 seconds to catch your breath. Nothing looks weirder than walking out of a single bathroom red-faced and out of breath.