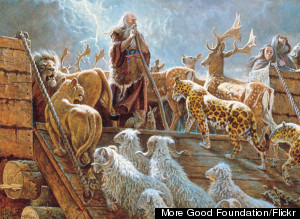 How well do you really know the story of Noah and his ark? Take this ten-question quiz to find out.

1.
God sent a flood in response to human wickedness. What led to that wickedness?
a. People ignored God's laws;

b. People offered the wrong kind of sacrifices;

The answer is (d). Genesis 6:2-4 refers to the time when angels took human wives, and ancient sources like Enoch give the details of the disobedient angels, their giant offspring, and the chaos that followed.

2.
Why did God choose Noah?
a. He was the only one to walk with God;

b. He was perfect;

c. He was better than anyone else back then;

d.
He was a skilled shipbuilder.

The answer is (c). According to Genesis 6:9, Noah was only blameless "in his day," suggesting that he might have been judged more harshly had he lived in other times. (Genesis 6:9 also says he walked with God, but according to Genesis 5:24, so did Enoch, so Noah wasn't the only one to do so.)

3.
What was the volume of the ark Noah built?
a. Much less than the Titanic's volume;

b. About the same as the Titanic's volume;

c. A little more than the Titanic's volume;

d.
Much more than the
Titanic
's volume.

The answer is (d). Genesis 6:19-20 says Noah collected two of each animal -- one male and one female -- and Genesis 7:2-3 says two of some, and "seven each" of others. (It's not clear from the text if that's seven males and seven females or just seven animals.)

c. One hundred and fifty days;

d.
One year and ten days.

The answer is (d). The rain lasted for 40 days (Genesis 7:14), but the water didn't start receding until the 150th day (Genesis 8:3), and mountaintops remained submerged until about the 250th day (Genesis 8:5). But according to Genesis 8:14, the land wasn't dry until the 27th day of the second month -- one year and ten days after the flood had started.

6.
With what invention is Noah credited?
a. Winemaking;

The answer is (a). According to Genesis 9:20, Noah was the first to plant a vineyard.

7.
What political conflict is foreshadowed in the Noah story?
a. The Babylonian exile of the Israelites;

b. The conflict between the Israelites and the Canaanites;

c. The enslavement of the Israelites by the Egyptians;

d.
The battle between David and Goliath.

The answer is (b). In response to Noah's nakedness (an unfortunate result of his new experiments with winemaking), Noah's son Ham summoned his two brothers Shem and Japheth to see what had happened. Unlike Ham, Shem and Japheth tried to look away and covered up their father. In response, Ham's son Canaan -- the father of the Canaanites -- was cursed to be a slave to Shem -- the father of all the Semites, including the Israelites (Genesis 10:25-26).

8.
What dietary restriction did God give Noah regarding the animals he had saved?
a. He couldn't eat meat with milk;

b. He couldn't eat meat with wine;

c. He couldn't eat meat with its blood;

d.
He couldn't eat any meat.

The answer is (c). Genesis 9:4 warns against eating meat with its life-giving blood. (This theme recurs in more detail in the dietary laws of Leviticus.)

9.
What is the connection between rainbows and the flood?
a. The rainbow guided Noah to safety after the flood;

b. The rainbow reminds people that God will never again flood the earth;

d.
The rainbow warns people what will happen if they sin.

The answer is (c). According to Genesis 9:13, the rainbow is a sign of God's covenant never to destroy the earth again. Genesis 9:16 explains further that it is for God to see, as a reminder of that covenant.

10.
What did people do to try to protect themselves against a future flood?
a. They kept Noah's Ark around;

b. They built a huge waterproof tower;

c. They learned to swim;

The answer is (b). According to Genesis 11:3, the Tower of Babel was waterproofed with bitumen. (Modern readers unfamiliar with ancient materials sciences might not appreciate the role of bitumen. Fortunately, Josephus goes into more detail, explaining the waterproofing of the tower and its connection to the flood.)

Dr. Hoffman is author of the popular And God Said: How Translations Conceal the Bible's Original Meaning and editor of the on-line "The Unabridged Bible," a resource for exploring extra-biblical material that sheds light on the Bible.