Thanks to Edward Snowden and the dilligent folks at the National Security Administration, it's no secret that tracking data is a highly sought after commodity. The bread crumbs left behind by cell phone owners and Facebook users do not evaporate into thin air like we might have thought. Instead, the bits of location-specific information are collected, analyzed and stored by corporations and the government alike.

It's an intriguing reality, one that has prompted more than a few conceptual art projects. One of the more surprising ones belongs to a media artist named Brian House. He's taken a year's worth of his own tracking data -- a tedious record of his individual daily routine -- and turned it into an 11-minute musical album, titled "Quotidian Record."

The vinyl project recounts the movement of House's body, with every revolution of the record representing one of the 365 days documented. The result -- a collection of electronic beats that sounds eerily like a deliberately rhythmic compilation -- is a tangible exploration of the many implications of readily available data. We spoke to House via email and he answered our most pressing questions on the topic, including how exactly he transformed digital data into sound. 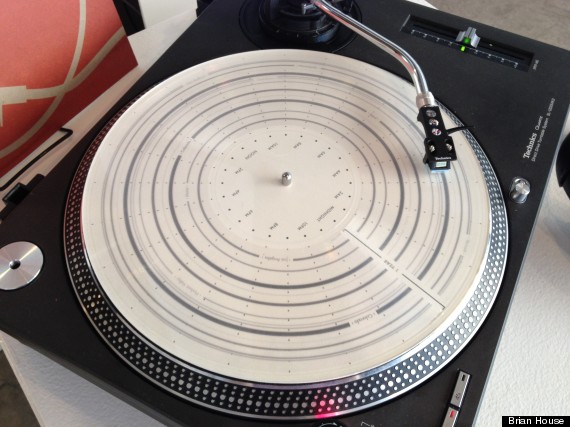 Credit Greg Mihalko for the collaborating on the visual design of the sleeve and the record itself.

Where does your obsession with tracking data come from?

Ha! well, I'm not sure that I have an obsession -- anyone who uses a mobile phone is tracking their data, or rather, at least two corporations are tracking them. If you have a web browser or a Facebook account, there is plenty of tracking going on. I do, however, have an obsession with looking under the hood, with hacking, with bricolage, and if there is something happening in the world, I want to take it apart and put it back together again in an effort to make sense of it.

Why not turn the data into images?

Images are suited for analysis, you take however long you need to visually decode the information. But music is something that is felt intuitively in the moment. That became a key aspect of the piece, and motivated the choice of vinyl as a form and the insistence on it being experienced tactilely, on a turntable. In general, we spend of lot of time taking photos of exceptional events and posting them online, and that's all a little false, isn't it? They leave out the gaps that are more truly the material of the everyday, and I hope that QR offers an alternative approach. 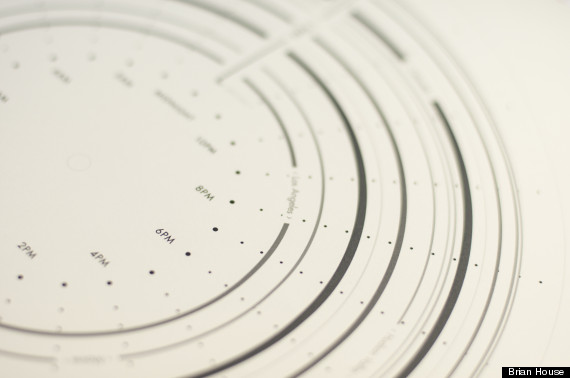 How exactly did you go about transforming daily routines into sound?

I started with a year's worth of location data that I gathered via OpenPaths, a project I contributed to while at the New York Times Research and Development Lab. The process of creating the music itself was actually fairly straightforward. I developed an algorithm for extrapolating "places" from the raw latitude/longitude data -- identifying the start and end points of my trips, and how long I was spending at each place. I knew I wanted this to be a tonal piece, because I wanted it to be understood as music rather than some arbitrary and cold sonification. So it was a compositional process of choosing harmonies to represent each place. Ordering the places by how often I was there adds to the musicality, because it means I can make consonance correspond to routine. (You hear a lot of major thirds, which is me sleeping at home).

So the code is literally just a table that maps place order to musical interval. I also realized, however, that the listener needs a frame of reference to perceive the daily cycles, something that corresponds directly to the rotation of the platter. That is the pulse you hear, which sets everything to a grid that corresponds to two hours of lived time and makes everything musically legible. My software outputs a MIDI signal -- the sounds themselves are actually produced via the open source/open hardware Meeblip synth, and an assortment of guitar pedals.

There's a lot of emphasis on the process of making this album, and perhaps less on the product -- the sound of the record itself. Is this something that's important to you -- the art-making as opposed to just the art?

Those dimensions are pretty much inextricable as far as I'm concerned. The aesthetics of the music are important to me, as is the craft of producing the vinyl itself -- these aspects make the communication with the listener genuine. I made a piece that I enjoy listening to and which reflects my inspirations. But ultimately the piece is conceptually motivated, I'm trying to say something both about the rhythms of everyday life and the nature of data, and the process of making the record -- the performance of making it -- is integral to how it should be understood. 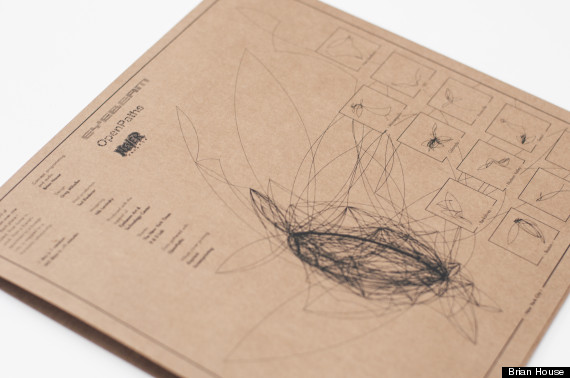 The project is gaining attention in the wake of the Snowden revelation. Did you feel influenced or inspired by the NSA leak?

Quotidian Record was actually completed as part of my residency at Eyebeam Art and Technology Center in the summer of 2012, so it predates the recent revelations about the NSA, though there was already plenty of speculation. I was, and am, very concerned about how data technologies change the texture of everyday life, whether it's surveillance by the state or the commodification of reified time -- all these photos and 'likes' that drive Facebook. The data exhaust everyone produces everyday through the use of these devices is more personal than we think, and we have to reckon with that.

If you could liken the record to any contemporary albums, which would you choose?

Someone made the comparison to Laurie Spiegel's "The Expanding Universe", which I actually (and embarrassingly) hadn't heard, but I am very happy about the reference. But to be honest, though you'd have a hard time hearing it, the most direct influence is probably "Aesthetica," an album by the Brooklyn black-metal band Liturgy. They are absolutely amazing. And the structural parallels are in there somewhere. 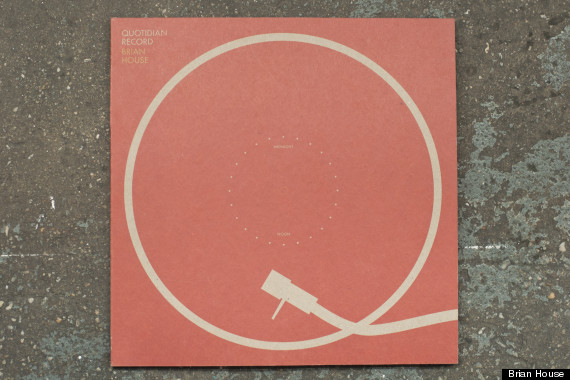