This is the story of my dear friend, what she knows now that could have saved the life of her child and thousands of others, what she's done with that knowledge and why you should know it, too.

I became friends with Phyllis in the 7th grade. I wasn't exactly the coolest 7th grader. In fact, during my middle school tenure I was awkward and spent a lot of time quoting movies and SNL, which did not make me any cooler.

I wasn't gonna get boys with my boy shaped body, I was gonna get them with my ironic wit and my awesome character impressions. Well, impressions I made. To most, I was weird yet humorous enough to talk to when no one else was looking. Phyllis was the opposite, she was beautiful, feminine and you could totally talk to her in public. She was also, unlike the stereotypical popular girls, kind. 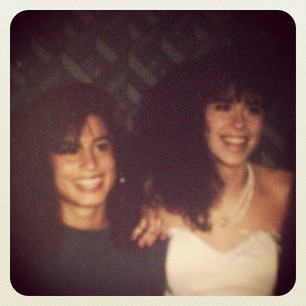 By 9th grade, I'd come into my own. Boys started to notice me and people actually talked to me in public. My humor was my calling card, and for the first time it wasn't perceived as too weird or goofy. Phyllis had remained a star at our school. She was in the student government and backed causes she believed in, all while maintaining her status. She was also in all the honors classes, where we sat together making silly jokes and talking about sex, and boys -- and how long we would wait to have sex with boys.

We would remain friends for many years to come. After I finished grad school, we lost touch. I would hear tidbits here and there in the way you would with any old school friend. It was before Facebook, so news took sometimes days, even weeks, to travel, not milliseconds. I heard about marriages, divorces, coming outs, a rare sex change, the usual fare, but not much about Phyllis.

I eventually reconnected with her on FB and we began to message. She sent me a cause to join, called R Baby. So, I wrote back, "What is R Baby, do you work for them?"

The phone rang, and Phyllis's voice sounded the same as it had in high school, but her words were shocking.

"R Baby is named for my daughter Rebecca, who died."

Having had two children of my own, I was speechless. I asked what I think we all ask next, "What? How? Was she sick, was something wrong?"

Not that it would in any way make it easier, but you want to know these things because it's almost more unbearable to hear about something that could have been avoided, like a car accident or any one of a myriad of fears that drives every mother crazy on a daily basis. Pictures falling into cribs, gas leaks, head injuries, bathtub drownings, choking on grapes or hotdogs, fires, kidnapping, being hit by a car, lightning, manhole accidents, I could do this all day.

But, I don't have to. We all know, those horrible images and thoughts that creep into our heads when we least expect it. Those beyond unwelcome visitors that like to linger and resurface when we are truly enjoying our lives.

"She had an infection that was misdiagnosed in an ER and could have been treated," Phyllis said.

Apparently, the ER that she went to said her daughter had a simple cold. They made her feel neurotic. They made her feel overprotective and ignorant. In the end, it was the doctors that should have felt unknowing and shameful. They had missed a common enteroviral infection, but was it their fault? They hadn't had enough training in pediatric emergencies.

You see, there's no standardization in the industry for pediatric training for ER doctors. My friend Phyllis, who had championed causes in high school and made everyone feel important, was doing what she did best, making life better for others. Using her charisma and her story to ensure others could avoid such horrific outcomes.

Her daughter Rebecca would be 6 this year. Instead of watching her play, put on make-up and talk in silly accents, Phyllis assures her little girl a legacy in the life of every child that is saved due to the funding of R Baby Foundation's hospital programs.

My dear friend, so few people would have the courage to do what you've done. The pre-teen in me saw signs of the amazing person you would become, 25 years ago. The mom in me is so grateful that there are special people like you, who turn tragedy into hope and change for others.

Things many moms don't know, but should:

The number of lives saved can grow exponentially with the passing of an important bill that will make sure ALL ERs are prepared for babies and children, and will create a uniform definition to qualify as a pediatric ER. You can sign to petition for that bill here.

Please pass this piece (or the petition) on, so that others can sign. This bill will help save lives and it will demand that your ER department is prepared for your child.