Rabbi Ovadia Yosef, the outspoken leader of Sephardic Jews in Israel died Monday. Cause of death was not released.

The 93-year-old rabbi, who was the spiritual head of the ultra-Orthodox Shas party, had been hospitalized several times over the last few months with a host of medical problems, including kidney failure, heart problems, blood pressure problems and infections, Haaretz reported.

JERUSALEM — Rabbi Ovadia Yosef, the religious scholar and spiritual leader of Israel's Sephardic Jews who transformed his downtrodden community of immigrants from North Africa and Arab nations and their descendants into a powerful force in Israeli politics, died on Monday. He was 93.

Yosef, who had suffered from a variety of medical ailments for several years, was hospitalized in recent days in critical condition after suffering kidney failure and problems with other bodily systems. Officials at the Jerusalem hospital that treated him announced his death.

Yosef was often called the outstanding Sephardic rabbinical authority of the century. His prominence helped boost the confidence of his community, which makes up roughly half of Israel's population but was long impoverished and faced discrimination by Ashkenazi — or European — Jews who traditionally dominated Israel's government and religious institution.

For three decades, Yosef held the final word over the party's decisions, with its leaders seeking his guidance over matters large and small. Without a clear successor, Shas is likely to enter a period of infighting and see its political influence diminished.

As hospital officials announced his death, anguished cries could be heard from a large crowd of supporters that had gathered. Shas leaders trickled out of the hospital reciting Jewish prayers and sobbing uncontrollably.

"The light of the sun has been extinguished," Aryeh Deri, a Shas leader, wailed. "How will we remain alone? Who will lead us?"

Crowds of anguished followers recited the kaddish, the traditional Jewish prayer for the dead. Israeli police closed central Jerusalem roads and deployed hundreds of officers ahead of an evening funeral. Hundreds of thousands of people were expected to attend.

Prime Minister Benjamin Netanyahu described Yosef as "a giant in Torah and Jewish law and a teacher for tens of thousands" whose rulings enhanced Jewish heritage yet also took into consideration modern times. "The Jewish people have lost one of the wisest men of this generation."

The Iraqi-born Yosef came to national prominence when he served as Israel's chief Sephardic rabbi from 1972 to 1983. While he was revered by his followers, his critics charged that he exacerbated ethnic tensions between Ashkenazi and Sephardic Israelis.

His ornate outfit, with a gold-trimmed black cape and upswept hat, combined with his ever-present dark glasses and habitually slurred speech, made him an easy target for caricaturists. He would greet visitors, whether they were simple followers or prime ministers, with a playful slap to the face.

But he was the charismatic face of his Shas party.

Shas first ran in an election in 1984, winning four seats in the 120-seat parliament.

It subsequently grew to 17 places, the third-largest party after the mainstream Labor and Likud. Even after being hit by scandals and the imprisonment of its leader, Deri, on corruption charges, it remained a midsize party that ensured a string of prime ministers their parliamentary majority. Shas currently has 11 seats and sits in the opposition.

Yosef's influence reached beyond the party, and he was known for his fierce statements that offended widely disparate segments of society, including Holocaust survivors, gays, Palestinians and secular Jews.

He made his biggest political-religious waves by ruling that Israel may give back parts of the West Bank in exchange for peace, invoking the Jewish concept that preserving life is the highest commandment. In an attack on the 1990-1992 government of Prime Minister Yitzhak Shamir, the rabbi asked: "What have you (Shamir) done to prevent bloodshed?"

"The sanctity of life overrules the slogan of not giving up an inch," he added.

The ruling countered decrees by other rabbis, who declared that no Jew had a right to hand over any part of the biblical Land of Israel to a non-Jew for any reason.

But in recent years he appeared to retreat, emphasizing the religious and security aspects of the West Bank for Israel and backing Jewish settlement there.

The rabbi said during a sermon in August 2010 that Palestinian President Mahmoud Abbas should "perish from the world" and described Palestinians as "evil, bitter enemies of Israel."

He later apologized, and on Monday, Abbas expressed his condolences over Yosef's death.

It was not the only time Yosef's mouth got him into trouble. In 2007, he said that Israeli soldiers died in battle because they were not religious enough and said the victims of Hurricane Katrina in the U.S. suffered "because they have no God."

The author of dozens of books about Jewish law and practice, Yosef was a master of communicating with the masses. His weekly sermon packed his neighborhood synagogue. Overflow audiences listened outside on loudspeakers to his often earthy remarks, and in recent years the sermons were broadcast by satellite on television.

In matters of religion, he upheld the Sephardic tendency to blend ancient Jewish customs with modern developments — a contrast to the stringency of Ashkenazi ultra-Orthodox Jews. In one of his better-known rulings, he said that religious women may wear slacks.

Some of his attacks on opponents stirred controversy. He once said he eagerly awaited the day when he could dance on the grave of Shulamit Aloni, then head of the secular Meretz party.

With his flexible attitude toward the key issue of peace with the Arabs, Yosef was able to guide his party into nearly all of Israel's coalition governments over the past 30 years, winning hundreds of millions of dollars in government funding for Shas projects and institutions in exchange.

These schools and institutions gained hundreds of thousands of followers. But critics said the Shas welfare system created rifts in society and left many in poverty.

Shas was forced into the opposition this year amid a rising tide of opposition to draft exemptions historically granted to ultra-Orthodox seminary students. Shas has resisted attempts to change the system.

Born in Baghdad in 1920, Yosef was four years old when his family moved to Jerusalem. His exceptional abilities and rebellious nature emerged early, when he was still a student.

He chafed under the strict rule of his European rabbinical instructors, writing conflicting opinions based on Sephardic tradition while still a teenager. His insistence that Sephardic tradition is as valid as the European Ashkenazi version of Judaism spawned a religious and cultural awakening among Israelis from Arabic-speaking nations.

Yosef is survived by 11 children, including a son who is the current chief Sephardic rabbi of Israel, and dozens of grandchildren and great-grandchildren. His wife Margalit died in 1994. 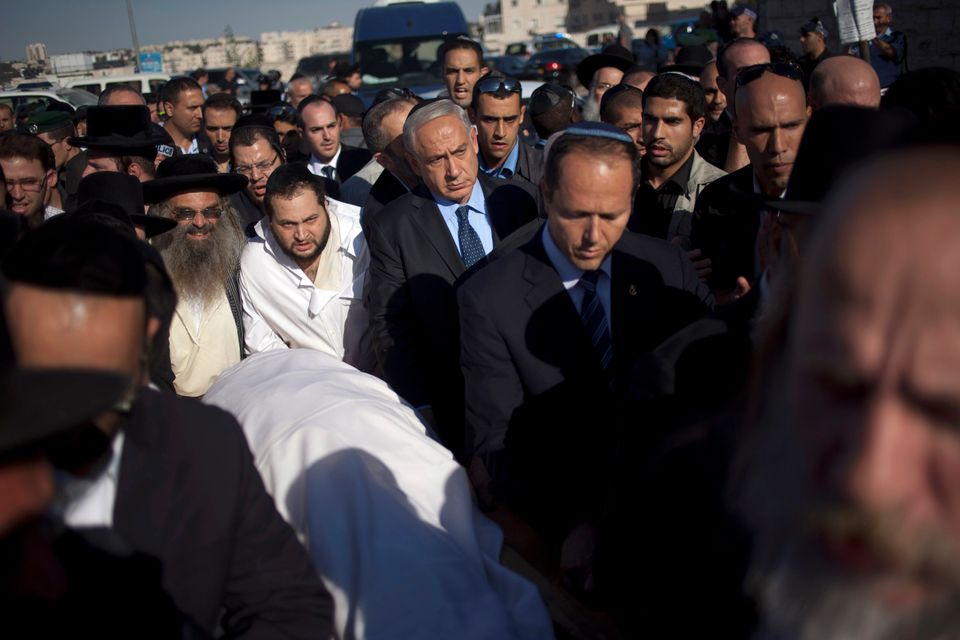 1 / 24
Benjamin Netanyahu
Israeli Prime Minister Benjamin Netanyahu, center, escorts the body of Rabbi Ovadia Yosef during his the funeral in Jerusalem, Monday, Oct. 7, 2013. Rabbi Ovadia Yosef, the religious scholar and spiritual leader of Israel's Sephardic Jews who transformed his downtrodden community of immigrants from North Africa and Arab nations and their descendants into a powerful force in Israeli politics, has died. He was 93. (AP Photo/Ariel Schalit)
AP