Race-based attacks and criticism of President Obama have been on the rise during the dog days of August. And they're not just happening at health care town hall protests.

A reader sent over a picture of a group of protesters camped outside Rep. Susan Davis's (D-Calif.). "Neighborhood Day" event this past week, brandishing signs calling the president a Black Supremacist and suggesting he's a Nazi disciple.

"Black National Socialism Is Not Utopia," reads one poster. 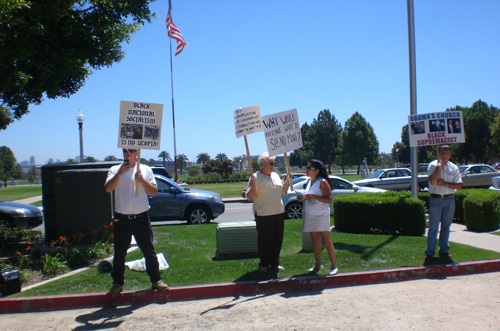 The protesters, the reader writes, were small in number. But their presence outside the event indicates that four weeks into August, the highly personal and often racially tinged vitriol directed at the president shows no sign of abating.

Earlier this week, Idaho Republican gubernatorial hopeful, Rex Rammell, said he'd buy a license to hunt Obama. Meanwhile, Rep. Lynn Jenkins, (R-Kans.) expressed her wish that the Republican Party would find a "great white hope" to take on the president in the next election.

"I saw that report," said Burton. "I also saw that her spokesperson backpedaled and said that that was a poor choice of words. We obviously give Congresswoman Jenkins the benefit of the doubt."