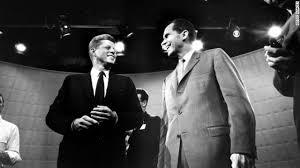 "We have never seen anything like this election," ranted Samantha Bee on the Feb. 29 episode of her TBS series, Full Frontal. CNN would beg to differ. Its new six-part miniseries, Race for the White House, premiering March 6 at 10 p.m. (EST) examines six pivotal presidential campaigns and finds that over the centuries, campaigning is pretty much the same as it ever was.

Natfali, a Clinical Associate Professor of History and Public Service at New York University, was the first federal director of the Richard Nixon Presidential Library and Museum in Yorba Linda, California. He was charged with giving the once-private institution a more non-partisan makeover. Under his stewardship grew the nationally-acclaimed exhibit dealing with Watergate. He also oversaw the release of more than a million pages of presidential documents and nearly 700 hours of the controversial Nixon tapes.

Natfali jokes that the CNN miniseries plays out as "a less cynical 'House of Cards.'" The association is apt; Kevin Spacey is a co-producer and also serves as narrator in chief. In addition to the 1960 race, this first season recreates the 1820 Andrew Jackson/John Quincy Adams contest, the 1860 campaign between Abraham Lincoln and Stephen Douglas, the 1948 Harry Truman/Thomas Dewey battle, and the 1988 George H.W. Bush/Michael Dukakis and 1992 Bill Clinton/George W. Bush campaigns.

Each is told through archival footage, commentary, and dramatizations. But knowing who won these elections does not diminish the drama. "The drama," Natfali says, "comes from learning how a candidate won. " Or, conversely, how they lost. For Nixon, the 1960 campaign was a watershed moment that left him embittered and set the stage for the dirty tricks of Watergate, the episode provocatively notes.

Watching the first episode, one sees modern parallels. Nixon, after serving eight years in the White House as vice president, thought he would be coronated. "He's Hillary," Natfali says. "There is a sense of, 'It's my turn.' But expanding their base was and is a challenge for both candidates. Hillary is having a hard time holding the Obama coalition (Sanders is crushing her among Millennials) just like Nixon couldn't hold the Eisenhower coalition. And, like Nixon, she is up against a charismatic adversary."

Thanks to the 24-hour news cycle and the Internet, this is a great time to be a political junkie, but here, too, Natfali says that this is nothing new. "Americans have been interested in politics since the expansion of newspapers," he considers. "The episode that deals with the 1828 election shows the very important role newspapers played, not just for information but for (disseminating) smears. Newspaper sales reflect people's interest, and they were able to sell lots of copies when there were edgy political stories."

Is the 2016 race too edgy? "We have a bad habit of thinking that things are the worst they've ever been," Natfali states. "If you're saying 2016 is the worst, then it means the country is going off the rails. I would look at it with a more optimistic approach, which is this country has had to deal with nasty campaigning since the beginning and we've managed to survive it and get some very good presidents."

"Race for the White House," then, is not just history; but also a call to engagement. "If you think elections are predetermined, you might not participate," Naftali says. "This series reminds us of the role of decisions, personality and accident have in shaping the outcome of elections. That should be an encouragement to vote. The dye is not cast; anything can happen. Don't remove yourself from the process. It's much more fluid than you think."

This article originally appeared on millionairecorner.com.