It has been said that racism is America's original sin. And today, well into our country's third century, we are far from free of it.

"Separate but equal" is no longer the law of the land, but for too many people, it is still a fact of life. African-Americans are disproportionately affected by poverty, unemployment and food insecurity. Black households have less than one-tenth the wealth of white households, on average. Millions of black, brown and poor children are relegated to under-resourced, struggling schools. People of color comprise about 30 percent of the United States' population but account for 60 percent of those in prison. Not since Reconstruction have there been as many attempts to restrict the right to vote.

And the presidential race is chock full of "dog-whistle politics." Republican front-runner Donald Trump has called for mass deportations of millions of immigrants. He has described immigrants from Mexico as "criminals" and "rapists." And his view of the Black Lives Matter movement: "They're looking for trouble." Trump is not alone; his incendiary views merely have stolen the spotlight from other candidates in his party who also play to anger, frustration and hate.

America is far from the post-racial society we hoped President Obama's election would usher in. In some ways, it is even more polarized. As Jitu Brown of the Journey for Justice Alliance has said, "You can't change reality unless you're willing to face it." The reality that we have to face, and change, is that we live in a society in which black lives have been demeaned and devalued.

And face it we must. As a woman, as a Jew, as a lesbian and as a labor leader in a time of great anti-union animus, I have had my share of biases projected on me. But it is nothing like the experience of people of color, and especially black and brown men and boys.

Those of us who aren't regularly subject to outright prejudice have a moral obligation to do the hard and perhaps uncomfortable work of digging into unconscious and semiconscious behaviors and attitudes about race. And that includes taking a look at our own privilege.

White Americans can go a long time without ever thinking about the color of their skin. Black and brown Americans have no choice but to confront issues of race every day. Most white Americans haven't had to -- and, honestly, haven't wanted to -- confront these realities. But we must.

The presumption of innocence, the benefit of the doubt, walking without worrying -- these should not be hallmarks of white privilege. They are human rights that should be enjoyed by all. How can we move forward if those of us who have enjoyed privilege our whole lives don't at least try to understand the reality of those who have not, and try to address it?

We must call out hate and hostility and honor the humanity of all people. 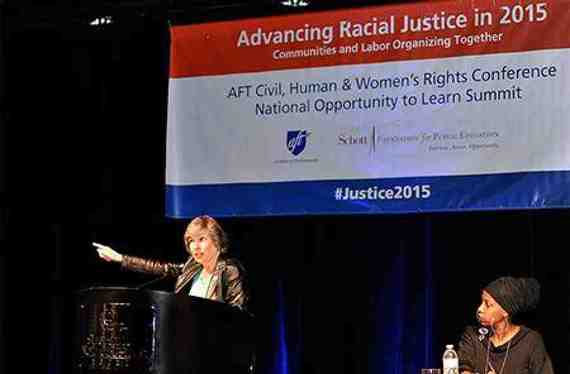 My union, the American Federation of Teachers, is trying. Last week, the AFT's Racial Equity Task Force issued "Reclaiming the Promise of Racial Equity: In Education, Economics and Our Criminal Justice System." The report offers concrete steps to create safe, welcoming and excellent public schools where parents want to send their children, where students -- particularly boys of color -- are engaged, and where educators want to work. It focuses on ways to end the institutional racism that pervades our criminal justice system, perpetuates economic adversity and drives school discipline policies that have led to disproportionate suspensions and expulsions of students of color -- as early as kindergarten in some charter schools -- and have failed to make schools safer.

But we know it is not enough to issue reports, or seek legislative remedies, or march for civil rights or contribute to groups advancing social justice. We have to confront prejudice whenever we see or hear it, and grapple with our own biases and behaviors. We have started this process of talking about race in our union. It has been tough and emotional, but it is absolutely necessary to ensure that black lives matter.

There is a saying from the Talmud: "Silence is akin to consent." The everyday indignities and constant fear that so many people live with are unacceptable. The devaluing of the lives of people of color is horrific. We must call out the hate and hostility that play to fears and frustrations, and we must honor the humanity of all people.

We like to believe that, faced with challenges or even simple choices, the way forward for people of conscience will be the righteous path, the moral road, the just route. We have at times stumbled on this journey, but we must get up, band together and do the hard work -- within ourselves and throughout our world -- of overcoming obstacles to reclaim the promise of a better America for all.