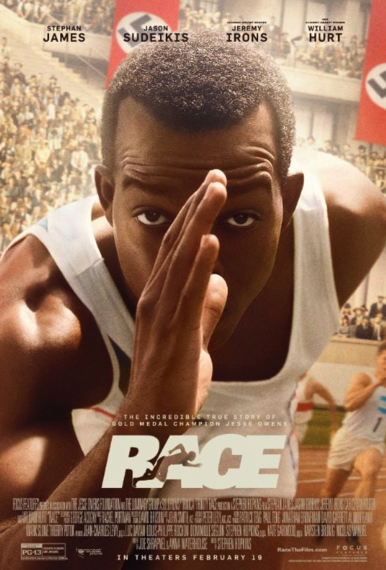 And how brilliant! The film is released during Black History Month!

Biopics are either really good or really cheesy. There's no in between with me. Imitating a person that you've studied for the role is really hard to do. In my opinion, the best biopics are of people unknown or those who are long dead - by like 20 years.

So now that you know where I stand, I'll say that Stephan James as Jesse Owens was brilliant. "I still can't believe I got the role. I still can't believe I got to play the fastest human on the planet," said the young star. Though super fans of Degrassi know him as that other black guy, he's still pretty much a rising star in Hollywood. (I say super fans, because James was on the show post-Drake - 2010-2012. So what was really the point of watching that show anymore after Drake, yanno?) But his role as Civil Rights leader John Lewis in Selma brought the Toronto kid into the limelight...at least in Tinsel Town's eyes. And now, he leads this film with a badass poster and title that is ever so relevant in today's climate where the discussion of racism is on the tips of everyone's tongue. Marlene Owens Rankin, Jesse Owen's second born daughter says there's just so much to unpack with the title itself. "It's a double entendre. It's Race on so many levels. We thought 'How appropriate.'"

The film begins in 1933 in Cleveland, Ohio. We meet Jesse's family, including his young baby and her mother (who he eventually marries.) I love a period piece, especially one that doesn't try to rewrite history. So this movie doesn't skirt by the realities of the time - the misery it was to be black in America. (Though, many can argue that it's only a little better now.) But this film clearly shows the disparity between black and white lifestyles.

There's no way to tell what you already know about Jesse Owens. Much of the trivia about his life is available (so no spoilers here) - it's just a matter if you ever cared enough about his story to look up things about him - beyond his four gold medal wins. But even with that, this film shows you there's yet a deeper story.
Here's some quick facts about Jesse Owen's life that you may not know, but are revealed in the film.
1. By age six, Jesse Owens picked 100 pounds of cotton a day.
2. His real name is James Cleveland, nicknamed JC by his family. But a grade school teacher misheard him, called him Jesse...and he just went with it.
3. Owens ran to gold in German-made track shoes handcrafted by the founder of Adidas.
4. The truth about historical moment of Jesse Owens crossing paths with Hitler. The film shows he was snubbed by the evil dictator, which many believed. But the press at the times reported that Owens got the Nazi salute from Hitler. Owens said that it was actually President Franklin D. Roosevelt who was the one who snubbed him. Roosevelt never invited Owens to the White House or acknowledged his triumphs.
5. The NAACP wanted Owens to pull out of the Olympics.
6. The US Olympic committee nearly pulled out of the games, too.
7. The team took ship to Berlin games. All athletes got first class cabins, except the black athletes.

For his part, James nailed the posture of Owens. Though Owens is dead, there's plenty of film of him while he was alive. "I definitely had my work cut out for me. When you're playing the fastest man on the planet, you have to do some sort of training." James started training for the role while still shooting Selma. "About two months before [we started shooting Race], at Georgia Tech." He says it was more than just learning to run like a track and field athlete. "I had to learn to run like Jesse. Because his running style was so unique. It was so particular."

"The American people need to dream." Avery Brundage, fifth president of the International Olympic Committee, serving from 1952 to 1972.

Cinematically, the sports moments ruled. From the races at the Big 10 Finals in Ann Arbor in 1935 to Owen's entrance into Olympiastadion Berlin, each scene was so well shot. The director Stephen Hopkins was brilliant at bringing you into the emotion of the athlete's triumphs and fails. There's a point during the Olympics when you are so encapsulated with Jesse's history making showing that you also feel in heart the "AWE HELL NAW" moment after his first gold medal win. This is where historically there's debate about whether Hitler acknowledged Owens' win or not. But regardless, in this scene, your heart sinks in the same way Owens' does in the film.

"There's no black and white - just fast and slow." James quote as Owens about being completely free from the turmoils of life for 10 seconds at a time, during races.

Sportsmanship is a big theme of the movie. Many people who report sports, including myself, see this proven time and time again. Athletes are in it for the competition, the chance to push their bodies to perform triumphantly, and also to dig deep to rise above defeat. The film tells the story of a great moment where sportsmanship rises over racism when German athlete Luz Long and Owens dramatically compete in the long jump. From this competition, Owens and Long became friends, which certainly didn't sit well with the higher ups in the German government. Luz was a national figure and his friendship with Owens was against all the hate and fear propaganda they were demonstrating to the world.

Another important theme demonstrated in the film is the relationship between Owens and his coach at Ohio State, Larry Snyder (played by Jason Sudeikis.) When most of the country still refused to allow black athletes play at their universities, Ohio State did...for certain sports. The film shows the lessons that Jesse later credits him for teaching - in particular, the mental strength to block out the noise of the crowd, who will mostly hate you. Snyder is given credit for allow black athletes to run for him, while the football team still didn't. As history proved, Snyder's decision proved beneficial providing broader opportunities not only for the athletes, but for his personal career, as well. Snyder went on to coach athletes who set 14 world records, won 52 All-Americans certificates and eight Olympic gold medals. He's now in the USA Track and Field Hall of Fame.

The story only touches on the fact that despite Jesse Owens being a world famous hero, back at home in the United States he was still a Negro and had to take the back entrance...even at events that honored him. Owens enjoyed very few luxuries after the Olympics, and this is where I feel the film was clumsy and missed important opportunities to tell the whole story of his life. The movie, instead, spends too much time establishing his life before college. It really could've started at Ohio State. His confrontations with racism, being poor and black, weren't moments that had any real depth of conflict nor were they portrayed as turning points in his life. What seems more important is to show that after his Olympic wins, he could only earn a living by exhibition races against horses. Which those who knew Owens knew that he hated, especially hearing tales that slaves sometimes raced horses on foot for the entertainment of their masters.

Watch my interviews with actor Stephan James and two of Jesse Owens' daughters.