Who's the food personality with the most media buzz of 2011? It's Rachael Ray, according to calculations by news archive company HighBeam Research.

But take a closer look -- none of these names appear on Restaurant magazine's recently released list, The World’s 50 Best Restaurants of 2012. HighBeam decided to investigate, analyzing data for the top five U.S. chefs detailed in the list -- Thomas Keller, Daniel Boulud, Grant Achatz, Eric Ripert, Daniel Humm -- and comparing their numbers to the top media performers.

The results, detailed in a release, weren't flattering to the former: 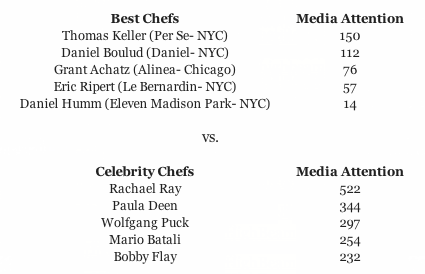