An unusual trial begins in Israel this week that people around the world will be watching closely. It involves the tragic death of a 23-year-old American student named Rachel Corrie. On March 16, 2003, she was crushed to death by an Israeli military bulldozer.

Corrie was volunteering with the group International Solidarity Movement (ISM), which formed after Israel and the United States rejected a proposal by then-United Nations High Commissioner for Human Rights Mary Robinson to place international human-rights monitors in the occupied territories. The ISM defines itself as "a Palestinian-led movement committed to resisting the Israeli occupation of Palestinian land using nonviolent, direct-action methods and principles." Israel was building a large steel wall to separate Rafah from Egypt, and was bulldozing homes and gardens to create a "buffer zone." Corrie and seven other ISM activists responded to a call on that March day to protect the home of the Nasrallah family, which was being threatened with demolition by two of the armored Israeli military bulldozers made by the U.S. company Caterpillar.

"The bulldozer proceeded toward Rachel. ... She was in her orange jacket. When it kept coming, she rose on the mound, and the eyewitnesses testified that her head rose above the top of the blade of the bulldozer, so she could clearly be seen, but the bulldozer continued and proceeded over her, and so that it was covering her body. It stopped and then reversed, according to the eyewitness testimonies, without lifting its blade, so backed over her once again. 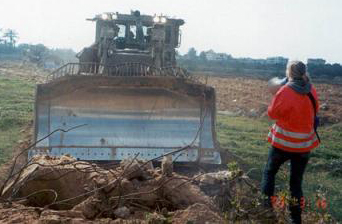 "Her friends were screaming at the bulldozer drivers through this to stop. They rushed to her, and she said to them, 'I think my back is broken.' And those were her final words."

Shortly after Rachel's death, the Corries met with the Bush State Department. It was there that the idea of a civil lawsuit was first presented, by Secretary of State Colin Powell's own chief of staff, Lawrence B. Wilkerson. Craig Corrie, Rachel's father, recalled: "He said: 'If it was my daughter, I'd sue them. I don't care about money. I wouldn't care about anything. I would sue the state of Israel.'" Ultimately, this is what the Corrie family did.

Just before heading to JFK Airport in New York to attend the trial, Craig Corrie told me about the lawsuit: "We're accusing the state of Israel of either intentionally killing Rachel or of gross negligence in her killing seven years ago." The day after Rachel was killed, Israeli Prime Minister Ariel Sharon promised President George W. Bush a "thorough, credible and transparent investigation." Yet according to a Human Rights Watch report from 2005, Israel's "investigations into Corrie's killing ... fell far short of the transparency, impartiality, and thoroughness required by international law."

The civil trial, Craig Corrie says, is not about the monetary damages, but to discover information, and "like [South African Archbishop] Desmond Tutu talks about, of mending the tear in society." The Corries never speak solely about their daughter, but about the plight of the Palestinians and the Israeli siege of Gaza. According to the Israeli Committee Against House Demolitions' latest figures, 24,145 houses have been demolished in the occupied territories since 1967, including the United Nations estimate of 4,247 houses demolished during "Operation Cast Lead," the name Israel gave for its military assault on Gaza last year. Of course, more than houses were destroyed there. More than 1,400 Palestinians and 13 Israelis were killed. The Corries also express concern about the psychological toll exacted on Israeli soldiers. Craig Corrie said, "We lost Rachel, and that hurts every day, but that bulldozer driver lost a lot of his humanity when he crushed Rachel."

The trial begins during the same week that Joe Biden makes his first trip to Israel as vice president. As chair of the Senate Foreign Relations Committee, Biden sought answers on the death of Rachel Corrie during the confirmation of U.S. Ambassador to Israel James Cunningham. Biden knows the pain of losing a daughter. His daughter was killed with his first wife in a car accident in 1972.

The Corries are calling on people around the world to stand with them on March 16, the anniversary of Rachel's death, for truth, accountability and justice, "to raise and highlight many of the critical issues to which Rachel's case is linked."

*** Amy Goodman is the host of "Democracy Now!," a daily international TV/radio news hour airing on more than 800 stations in North America. She is the author of "Breaking the Sound Barrier," recently released in paperback and now a New York Times best-seller. © 2010 Amy Goodman