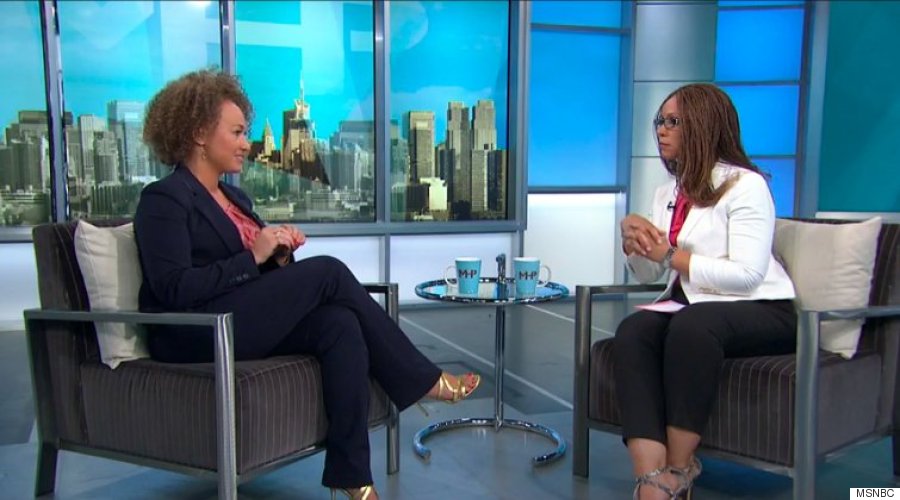 Rachel Dolezal, who resigned as head of the NAACP chapter in Spokane, Washington, on Tuesday addressed questions around her ethnicity and self-identification as a black woman, even though her biological parents say she is white.

In a wide-ranging interview with MSNBC’s Melissa Harris-Perry, Dolezal opened up about many of the concerns and criticisms that have been raised in the days her story has dominated national headlines. An edited version of the interview was broadcast Tuesday night.

Dolezal appeared on "Today" earlier Tuesday, but her interview with Harris-Perry was more in-depth, allowing Dolezal to detail her experiences growing up and later as she assimilated black culture. Harris-Perry asked Dolezal to weigh in why she identifies as black and what prompted her to make the declaration.

Here are a few key takeaways from the interview:

On whether Dolezal was aware of the widespread coverage of her story:

“I haven't seen probably 90 percent of what's been put out there,” she said. “I feel like I'm aware of the narrative enough to kind of guess what the fallout is going to be.”

On whether she intended to be thrust into the national spotlight:

“Absolutely not,” she said. “It's been grueling, just I felt attacked by this, out of the blue, blindsided and certainly nothing that I would choose, especially right as this is very crucial time juxtaposed with the convergence of several really critical things that could have probably gone a little bit differently and a little better if this had not happened right now.”

On the ‘critical things’ Dolezal said she is experiencing:

She cited a “family legal matter” that “probably today is kicking off,” but didn't elaborate. However, reports on Tuesday say that Dolezal’s brother, Joseph, allegedly sexually abused her adopted black sister in “2001 or 2002.” According to Buzzfeed, Dolezal’s parents, Ruthanne and Larry Dolezal, say Rachel orchestrated the claims in order to “win custody of her brother Izaiah.”

“Just incredible terrible timing for me to be in the public, having some kind of a statement on a critical issue that's -- that I -- [am] black or white? That seems to be an issue of credibility, when really my credibility being in question will benefit the narrative of the defendant in that particular case,” she said.”And I'm trying to support the plaintiff.”

On what she means when she says she is black:


“First of all, it means that I have really gone there with the experience in terms of being a mother of two black sons and really owning what it -- what it means to experience and live blackness. And that's one aspect,” she said.

“Another aspect would be that I, as a -- from a very young age, felt a spiritual, visceral, this feeling of central connection with black is beautiful, you know, just the black experience and wanting to celebrate that. And I didn't know how to articulate that as a young child, at the age of kindergarten or whatever, like you don't have words for what's going on. But certainly that was -- that was soaked in. It was totally conditioned to not own that and to be limited to whatever biological identity was thrust upon me and married to me and so I kind of felt pretty awkward a lot of the time with that.”

Dolezal said on "Today" that she self-identified with being black at the age of 5. She told host Matt Lauer that she began “drawing self-portraits with the brown crayon instead of the peach crayon, and black curly hair.”

On the struggles with her identity and how they have affected her own parenting of her two adopted sons, who are black:


“I felt very isolated with my identity most of my entire life that there's nobody really got it and that I didn't really have the personal agency to express it," she said. "And certainly I kind of imagined that maybe at some point, especially, you know, for after, because I was graduated from high school and in an adult stride that maybe I'd be able to really process that, own it publicly and discuss the kind of complexity."

On dealing with the reactions from black women:


“I would say in stepping outside of myself, I would probably be enraged. I would be like, what the ... You know, this -- how dare she claim this?” Dolezal said.

“But they don't know me. They really don't know what I've actually walked through and how hard it is. This has not been something that just is a casual, you know come-and-go sort of identity you know, or an identity crisis. It's something that I've paid away.”

On what she will do ‘if rejected by the black community’?

“I'll be me because, you know, I feel like at the same time, I never want to be a liability to the cause,” she said.

On her thoughts about cultural appropriation:

Dolezal said she “absolutely” has a critique of racial appropriation and has discussed the topic among her students. She mentioned Australian rapper and model Iggy Azalea as an example. To criticism that Dolezal committed similar -- or arguably more severe -- acts of appropriation, she answered, “I get it. I get it.” 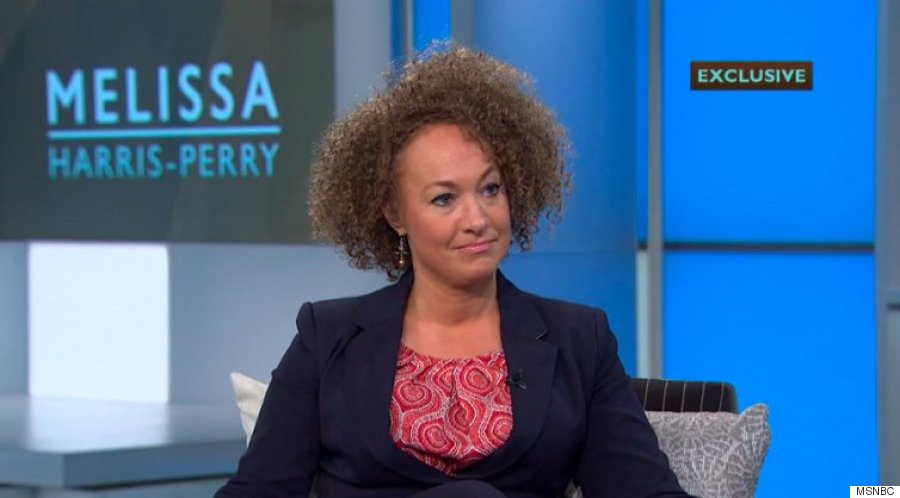 On why she sued Howard University:

A report on Monday revealed Dolezal had unsuccessfully sued Howard University, a predominantly black school, on claims of racial discrimination. Dolezal, who graduated Howard in 2002 with a Master of Fine Arts degree, said she was seven months pregnant at the time and felt as though she was treated unfairly in being denied financial assistance and a teaching position. She said a school director said “other people need opportunities for the teaching position and you have white relatives so….they probably can afford to finance and assist you.”

She added: “I don't believe in reverse racism. I really don't. You know, there's no such thing as racial non-white supremacy. It's not like I said, 'Oh, like, Howard University is racist.'”

On her white relatives:

Dolezal acknowledged that her birth parents, Larry and Ruthanne Dolezal, raised her, but she does not identify them as “Mom" and "Dad.” Instead, she said her family is “fluid” and she identified a black man named Alfred Wilkinson as her dad. “He’s amazing, absolutely amazing,” she said.

In an interview with NBC's Savannah Guthrie on Tuesday, Dolezal said: "There's no biological proof that Larry and Ruthanne are my parents."

On claiming she was born in a teepee:

Dolezal said she used hunt with a bow and arrows and spent time living in South Africa. “Some of it has kind of a little bit of creative non-fiction with regards to what happened in sequence of events and dates and so forth,” she said of the story, but most is true.

“It's like yes and no on some things. But there's -- I get the question of credibility, right. And like I said, I will own that there have been a few interviews, especially after having full custody of Izaiah, I think it became a little complicated.”

On being a ‘con artist’:


“I don't think anything that I have done with regard to the movement, my work, my life, my identity, I mean, it's all been very thoughtful and careful, sometimes decisions have been made for survival reasons or to protect people that I love,” she said. “And all things included, when it boils down, the entire world could say stand down. But when it comes to being there for my kids, for my sister, I would never stand down on that.”

On her hair styles:

“It also felt like an affirmation of black is beautiful, you know? Because for so many centuries, you know, there's been ... the relaxers and the long weaves and the skin bleaching and all that fallout of psychological disorientation and certainly trauma came,” she said.

She said she is offended when airport security agents touch her hair. “Oh no, hell no,” she said. “I'm like, 'Get your hands out of my hair!' And no. Like, you know, no. No that's a personal violation. That's a privacy breach.”

Dolezal described herself as a hair stylist and said she had always styled her sister Esther’s hair. She said Esther, who is adopted and black, wore her hair in clean, neat styles that Dolezal always admired. “Her hair is so beautiful and so long and so healthy,” she said.

For her own personal hairdos, Dolezal mentioned Mississippi hairstylist Donna Pollard. “She'll braid your scalp into your hair. It lasts forever,” she said. “And so she started doing my hair and doing braids. And I loved it. It was so beautiful. And but I noticed that it did change how people perceive me. They're like, 'Oh, she's down.'”

Some people argue that those born as a member of one race can identify with another, making them transracial. This is reportedly common among adoptees whose adoptive parents identify with a race different than that of their adopted children. Dolezal said she’s never said, “I’m transracial.” Rather, she said the term is a distraction from the black lives matter movement.

“Everybody's life matters. But that's why we have to say black lives matter, because the highest disproportionality, police brutality, disenfranchisement, education disproportionality in school discipline, curriculum, misrepresentation, all of this,” Dolezal said.

“Black lives matter is the corrective to what's happening. And to hashtag transracial lives matter is kind of like a diversion from that. And so I don't think that's, that's not what I'm about.”

On whether she thinks her actions constitute "passing":


“You know, I think it's different than that. I don't even know that I've had time to really put into words exactly what's going on right now,” she said.

On whether her children are okay:


“They are, they are. They mean the world to me. Nothing will ever come before them, including me,” Dolezal said. “And I hope that this whole conversation ultimately at the end of the day leads to self-determination and empowerment, not only for them, but also for the world. You know? For everyone. But especially for them.”