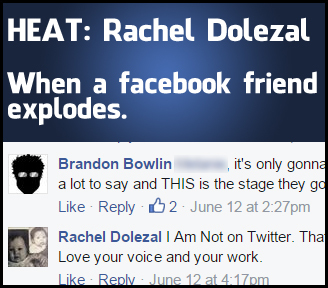 Speak to a lawyer. The internet is forever and you're gonna need to eat 3 months from now.

This was my suggestion on the phone Friday, June 12. Rachel Dolezal seemed unfazed.

See, BuzzFeed is good at what they do. They do pop culture quizzes, "Americans Eat Foreign Salads" vids, DIY creature comfort pieces, animal loops, and GIF-filled Game of Thrones articles like no other new-age zeitgeist assembly line can. What they post blooms, like the top of a nuclear bomb that settles onto the internet only after everyone has shared, embedded, or watched it. They do the "now" really well.

They also do stories very well and on Thursday, June 11, 2015, they had just caught hold of the latest KXLY-4 report about Rachel Dolezal.

Four years back I had dreams of creating a kind of Huff Post of my own. I wanted contributions from comics, screenwriters, bus drivers, reporters, artists, and a few academicians for gravitas. I don't remember how we became FB friends, but I checked out Rachel's art, writing, and a lecture. Then she hipped me to the roiling race fury of Coeur d'Alene and I asked her to join my team.

I ran out of money before it could launch, but she and I, like a few others from my lost "team", remained FB friends.

Over time we inboxed a bit. Convos, jokes, life...she laid out her narrative. Her history and family. Her brother, Izaiah. Later on, she even told me about the Teepee and hunting with bow and arrows. Honestly, I just took that as "FB lore". Everyone contributes to it. Whether it be a photobomb with a celeb you timed just right to seem like a selfie or a picture of a neighbors house you claim as yours or an old pic you use as...current; FB Lore is not to be looked at deeply.

Back to June 12. I don't know if humbly apologizing would've stopped the bleeding, but I suggested it to her in a message. Again, she seemed unfazed by it. And it was over anyway. Black Twitter was afire and using the most powerful weapon known to man--humor. #AskRachel had started. That's when I posted. She commented that it wasn't her feed. Didn't matter. The damage was done. That next day I began to lobby her for this piece, but the NAACP locked her down until Monday. I was sure they were gonna ask her to resign.

Someone asked me if I knew she was White. Nope. Maybe in the past I was the dude who'd tilt his head, but today I don't go around pointing fingers and yelling "J'accuse!" with my thin-ass lips at every racially ambiguous person I see. Besides, she actually looks like one of my grandmothers. Moreover, there's no practicality to it. Why would someone say they are that when they are not?

We don't like historic "passing", but we understand it. We get that there are potholes in a stratified culture with White Supremacy in its DNA. Yet this shit here dropped off some unclean chaos. And it only got worse: possible plagiarized painting, bad interviews, a story of her berating a student for not being Latino enough--everything she'd done seemed ironic now. Especially regarding the "authentic." What's more authentic than championing causes related to justice? Nothing--unless one is wearing Black like a jacket. An accoutrement.

But what is the authentic Black? Is it, say, Nicki Minaj?

In comparison: One wears a straight blonde wig. The other curls her hair up. One might have fake breasts and booty...the other may not. One claims Black in all things, the other puts Malcolm X on an album cover with the words "Lookin' Niggas." They both work hard at their crafts. Is Rachel Dolezal's biologically White expression of Blackness any worse than Nicki Minaj's? Are either of them fully authentic? Yes. No. Maybe.

The difference is that one is living her art while the other is (was) an advocate representing a group of people. Falsely. But not ignobly. More like the great Native American chicaner Espera Oscar de Corti aka Iron Eyes Cody.

Meanwhile camps de-camped and went to battle over this issue.

"Who cares, as long as she's helping!"

By Monday lines were drawn coast to coast. Way past her unapologetic and quizzically narcissistic resignation ("my vice president?") from her NAACP post, it drops that she sued Howard University as a White woman for not getting a gig. Aaand, here be the hook that holds the jacket.

As for having ANY woman speaking for Black women through a seemingly counterfeit ID, the anger rests in the fact that the road to Black women being heard, to their voice, was long and hard and is currently still being fought for. So much so today that usurpation of that history and amplification of such through cultural "camouflage" inspires rage rather than camaraderie. Yet still, the simplest of apologies might have deflected the hydra-headed-blonde-dreaded fallout from this ruse.

Maybe she just broke the dam of a mile-deep ocean of history where Black women's distinct features (and those attributed to them) have been dismissed and relegated to "most unattractive"...until Kim Kardashian's pouty lips, shelf booty, and overall thickness was wrapped in a distinctly "not-Black" package and is now continuously sold as a paradigm of beauty. While men may mock this in Dolezal memes, like Kimmie's butt in Paper, every picture has the potential of reminding Black women how easy it is to accept them . . . as long as it ain't them.

So there it is. What with mentions of Blackface and some deeper "experience", her Today Show appearance wasn't much better. I've been inboxing her the whole time. Still reaching for a quote. But Rachel Dolezal will probably, like Daenerys Targaryen, mount a Transracial dragon to live the life of a talk show circuit Black woman. A twist of racial constructs not offered her darker-skinned, young, educated brother or feisty son.

Still, a Game of Thrones moment would be interesting if one evening, during a grand feast, Jordaned footsteps approached and..."Mom? I want to identify as White."