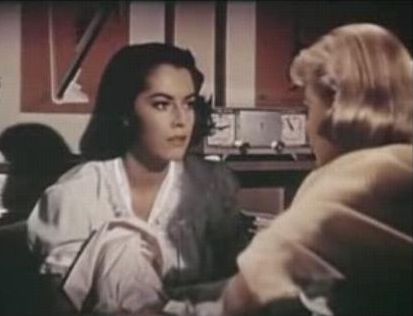 The film Imitation of Life tells the story of a girl named Sarah Jane who grows up conflicted about her race. She discovers she can pass for white (both her parents are black, but she favors her light-complected father) and becomes obsessed with hiding her racial identity. In one scene Sarah Jane cries, "I want to have a chance in life. I don't want to have to come through back doors or feel lower than other people or apologize for my mother's color."

As the movie progresses, Sarah Jane's lies disintegrate around her. When her white boyfriend learns she is black, he beats her and leaves her in an ally. She distances herself from her mother, who is a domestic worker, and lives her life as a white woman under an assumed name. Sarah Jane's mother eventually dies of a broken heart.

I remember watching the 1959 version of this film with my mother. By its end she'd be sobbing. I'd unsuccessfully attempt to make meaning of the story at such a young age. My mother would get herself together and delicately try to explain the complexities of racism without sewing the seeds of hatred in my psyche. I can't imagine the gut-wrenching task that that must've been for her, or is for any parent.

When I learned about Rachel Dolezal -- the white (former) NAACP leader who has been posing as a black woman -- I immediately thought of Imitation of Life and conversations I'd had with my mother about racism and its toxic effects on American society.

I wondered about Dolezal's experiences growing up in Montana. She identified as white then, with blond hair and blue eyes, though in an interview she claims she was conflicted as an allegedly biracial child about "which crayon" to draw herself with. In another interview, Dolezal talks about accepting her "light-skinned privilege," strangers asking to "touch her hair," and her sons being terrorized because of their skin color. Were all these experiences true? I wonder what else she's told others about her experience as a woman perceived as black in America.

In addition to her duties as leader of the NAACP's Spokane, Washington, chapter (she's recently stepped down), Dolezal is a professor at Eastern Washington University, teaching courses including "The Black Woman's Struggle." I wonder what she knows of that struggle. It would be fascinating to hear how she presents that information in an academic setting.

According to Dolezal's parents, who are also the foster parents to four black children, Dolezal chose to "distance herself from the family" around 2007. Her parents expressed their concern with their daughter's deception, saying she's "as white as we are."

Dolezal refers to her estranged parents by first name only (Larry and Ruthann) and says she doesn't "give two shi**" what they think about her racial identity. Prior to that interview she'd produced a fake photo of her alleged father for the NAACP's Facebook page.

Dolezal's adopted brother, Ezra Dolezal, offered up his opinion on his sister in an interview with CNN. "I believe that the first most important thing, regardless of what a person does, is that they have integrity," he said. "Rachel has done really good work fighting against racism and police brutality ... but she went about it the wrong way. She said [she] was born black. I grew up black, and I know what it's like growing up as an African American in this world. She does not."

It's uncommon to hear of a white person pretending to be black in a country in which there's nothing to gain by doing so. And by pretending, I don't mean cultural assimilation. I mean making verbal claims of blackness, checking the "African American" box (albeit occasionally) on official documents, and making a living giving lectures about the black experience.

I remember learning that some Jewish families would get nose jobs and name changes to avoid discrimination in America. It would be nearly impossible for the average black person to disguise their blackness. Black people can't escape our blackness with plastic surgery or a name change. It's our color, and the experiences intrinsic to our color are inescapable. Black people can't choose when we want to be black, and that's a part of our experience.

Dolezal can't claim the experiences of an African American as her own any more than I can claim the experiences of a Native American as mine. I know nothing of that struggle, though I can empathize. That Dolezal empathizes with the struggles of black people and has spent a large portion of her life crusading for racial equality isn't only wonderful; it's needed. History has proven that diverse voices are a crucial component of change. We know that human compassion changes the world. I don't have to be LGBT, a woman, or part of an oppressed minority group to rally against their oppression.

The black experience in America is much more complex than attending a black university, marrying a black person, teaching African studies and wearing an ethnic hairstyle. Dolezal's efforts to educate others on racial inequality appear to be sincere, and she needn't imitate anyone. She's a talented artist and has shown her ability as a leader. She is enough just as she is. Dolezal needs to know going forward that she can pursue the same work and fight the same injustices from an authentic place. And she should.