Michael Moore appeared on Rachel Maddow's show Thursday night to discuss the expansion of the Occupy movements sweeping across the United States.

The filmmaker and activist has traveled across the nation to speak to protesters in various cities including New York, Oakland and Denver. He was speaking to Maddow from Denver, where he addressed demonstrators earlier on Thursday.

Moore said that he has been seeing protests that possess many similarities despite taking place in different locations. He said that protesters have realized that America's "democracy does not apply to [the] economy."

Maddow pointed out that smaller cities like Pensacola, Florida and Youngstown, Ohio were also staging "Occupy" protests. Maddow said it almost "hits at another level" to see the movement spread so far and wide.

Moore agreed and said that the media has not even been able to cover the full extent of the Occupy protests because they were occurring in so many different towns and cities.

When Maddow asked Moore about some of the protests' more violent moments, Moore had a suggestion he recently shared with protesters in Denver.

Moore told protesters, "if you see someone trying to incite violence, start with the assumption that that person is...undercover homeland security or a cop or whatever, because this is the history of America, where those in charge have tried to ignite people, incite them to commit acts of violence. I tell them, don't be incited. Just assume right away that person is not part of the Occupy movement if that's what they're calling on people to do."

Moore has spoken to the press regarding the Occupy movement on multiple occasions over the past month. In one of his more elaborate appearances, Moore joined Piers Morgan on his CNN show when the program hosted a live studio audience and facilitated a town hall discussion. 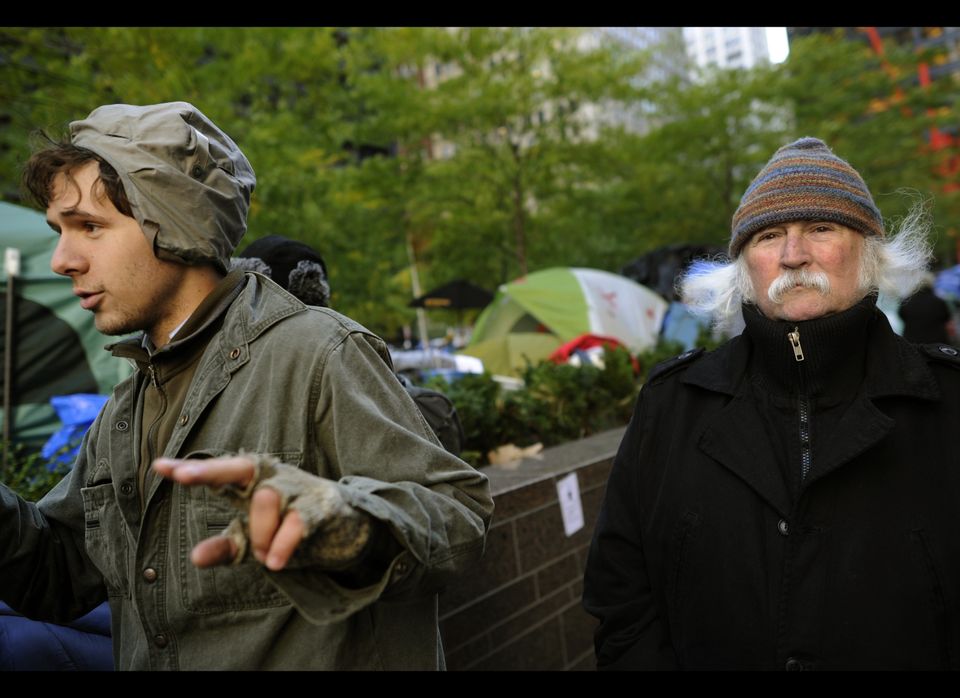 1 / 25
Occupy Wall Street
Singer David Crosby from Crosby, Stills and Nash (R) walks among the demonstrators with 'Occupy Wall Street' as they continue their protest at Zuccotti Park in New York on November 4, 2011. The encampment in the financial district of New York City is now in its second month. The demonstrators are protesting bank bailouts, foreclosures and high unemployment. AFP PHOTO / TIMOTHY A. CLARY (Photo credit should read TIMOTHY A. CLARY/AFP/Getty Images)
Getty