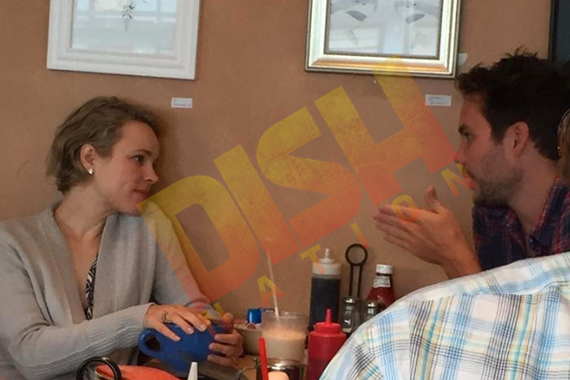 Rachel McAdams and her True Detective co-star Taylor Kitsch have reportedly been dating, and Dish Nation obtained exclusive photos of the two together on July 18 in which an eyewitness revealed the couple was "canoodling."

Rachel, 36, and Taylor, 34, were spotted having brunch on Saturday at the Marina Del Rey, Calif., breakfast-all-day hotspot, Cafe Buna.

"They were definitely canoodling," an eyewitness who wishes only to be publicly identified as 'phongdiddy' told Dish.

"They were laughing, touching, staring into each other's eyes as the pics show and smiling...but not holding hands."

Safe to say both Rachel and Taylor were sporting equally awesome bedhead -- but no confirmation whether or not they actually spent the night before together. CLICK HERE TO SEE THE PHOTOS.

Reports that Rachel and Taylor are dating first surfaced at the beginning of July after they were seen having dinner the month before at Osteria Mozza in West Hollywood -- but no photos have surfaced of them together outside of the True Detective set until now.

Rachel famously dated her The Notebook co-star and fellow Canadian Ryan Gosling for the two split for good in 2008 and Ryan moved on to have a baby girl in 2014 with current girlfriend, Eva Mendes.

When asked last week whether or not she was dating Taylor, Rachel didn't confirm nor deny the reports.

CLICK HERE TO SEE THE PHOTOS OF RACHEL AND TAYLOR TOGETHER.