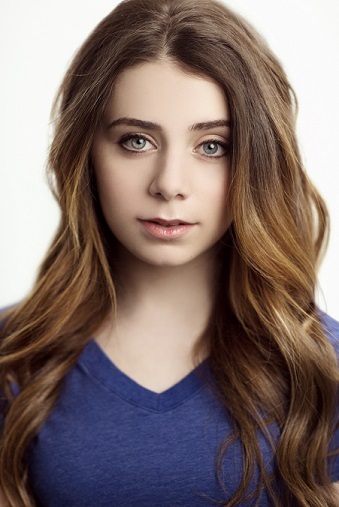 Ever have a friend who fits so many things into one day that it's impossible to understand where they find the time for everything? Well, that's actress Rachel Resheff.

I can't even imagine how she found the time for this interview! Rachel put so much heart and soul into her answers I had to break it up into two parts, so be sure you check out both pieces.

Now let's see what makes this 15-year-old so incredible!

Be sure to check out Part II to find out who Rachel played on Netflix's Orange is the New Black!

You're currently on Broadway in Larry David's Broadway play Fish in the Dark with Jason Alexander. What was your audition like for this role?

I read about Fish in The Dark coming to Broadway in the Equity audition announcements. My family and I anticipated its arrival with excitement because we are huge Larry David fans. After learning that there was a role for a young teenage girl, my agent secured me an audition for the project. The breakdown of the character "Jessica Drexel" (Niece of "Norman Drexel" -- played by Jason Alexander and originally played by Larry David) called for a 14-year-old intellectual Jewish girl. I went into the audition dressed as myself, since I was a pretty accurate fit for the character description.

There weren't any suggestions or notes about the role or the show itself. Larry David, along with the director, Anna Shapiro and producer Scott Rudin, were seeking all of the various parts of a dysfunctional family and so I believe it was about the feel of the actors and their personalities, as well as their ability to hit the comedy of the play, which is very quick, sharp, and funny. I think they were looking for real and simple in "Jessica Drexel", as she is a kind of centered presence in a world of very larger than life people, and that worked in my favor in the process.

Which coast is your main residence? Where were you born? Do you have siblings that live with you?

I was born in NYC. I have always lived on the East Coast, and that is where my family lives as well. I have two older siblings, a brother and sister, who have very different passions and interests than I do. We are a close knit family so when my brother goes to college this fall, we will feel happy for him, but sad for us. My sister will leave for college a year later, and I might have to stow away in her suitcase.

I have studied ballet, tap, jazz, and hip hop since I was three years-old. Tap is my favorite because it has such a rhythmic and musical element. My dance teacher, Janine Molinari, is a huge tapper, and sets a bar I try to reach every day. Ballet is a foundation for all dance and I enjoy what it allows me to do as a performer.

My voice teacher helped me to see voice as a lifetime instrument, so it wasn't until recently that I let my inner belt fly. Voice is an instrument that requires both patience and care. It has always been important to me to work on all different types and genres of music.

I also play guitar, which I taught myself, and have played the piano for five years. I currently am a student at Fiorello H. LaGuardia High School of Music & Art and Performing Arts.

On July 26, you will have your debut at 54 Below. How did this come about?

During a music coaching session, Lindsay Mendez who's an amazing mentor in my life, suggested the idea about how fun it would be to perform a one-woman show about my life as a teen performer. After a call with 54 Below, Lindsay came back to me saying they loved the idea and concept of the show. Knowing Lindsay would be the perfect director, I asked Steven Lutvak, who co-wrote and composed the Tony Award-winning A Gentleman's Guide To Love & Murder to musical direct the show. I was over the moon when he said he had time in his non-stop schedule. Steven has been my teacher, role model and friend since I first started in this business.

In Unwrangled, I will chronicle what it is like to be a young professional actor growing up in the spotlight via a musical memoir; where I bring the wild aspects and spectrum of emotions to life. There are so many perceptions of who embarks on the type of journey I have had and what the path must be like. My goal is to bring people into that world and see why young performers have this unexplainable passion and how its collected moments are the reason us young actors keep doing what we do.

You're 15 and already have been in five Broadway shows. (Fish in the Dark, The People In The Picture, Shrek, Billy Elliot, Mary Poppins.) You've also done non-Broadway theater. Tell us the difference between working on Broadway vs. non-Broadway.

Broadway is larger than life, and there is an exuberant energy that flows when the audience is with you. I am so lucky to have had the opportunities I have had to be in Broadway shows. In Shrek the Musical when I was only eight years-old, I first learned about the magnitude of a Broadway stage in the 2,000 seat Broadway theater. I would come out in a big tower and sing with Sutton Foster, and then I would watch on the stage monitor as each ensemble actor and dancer would bring to life their stories. Each show has such different spirit and life backstage and onstage. Mary Poppins and Billy Elliot were about the bonding of all of the kids. Most Broadway shows make a big effort to cast kids who get along with other kids. I think that's probably why the processes can involve multiple callbacks. At age 10, when I entered my fourth Broadway show, The People in the Picture, written by Iris Rainer Dart who is now bringing her new show Beaches the Musical to Broadway, I had the chance to create a very big part opposite Donna Murphy who played my grandmother. Onstage I would watch Donna as she held her glasses or tilt her head a certain way, or change so slightly the lilt of her voice, and I was mesmerized by how the character was inside her body. At the end of the show, when I was crying as Donna's character died, I was crying from a very deep place because I had connected so much to her. Shows are finely tuned machines, and every actor relies on the precision, heart, and energy of every other actor.

Plays, on Broadway and Off Broadway, require a very strong sense of timing and there is a rhythm that has to develop among the actors that draws the audience in, because there isn't the music and dance and movement that musicals have to energize the audience. Larry David's play feels like live comedy every night. Larry and Jason Alexander have brought such different things to the lead role, but each one has brought a larger than life element that sets a tone for each of the amazing actors in the play to weave into. One of the Off Broadway plays I did, The Big Meal, directed by Sam Gold and written by Dan LeFranc, had the feel of an orchestra, with different generations acting simultaneously and literally bouncing rapid fire off phrases which is a very true re-enactment of how real life can be. Another play I did, Everything is Ours, directed by Adrienne Campbell-Holt and written by Nikole Beckwith, challenged the audience to look at how to connect to other people and form families in an increasingly remote world. Sometimes in plays, there can be even more of an intimacy that develops with the audience in a play in both large and small theaters. Besides the huge laughter and fun of working with the Fish in the Dark cast, the highlight of my last few years was playing the title role "Carrie" in a teen production of Carrie the Musical, produced by The Broadway Workshop, a youth and teen theater company run by Marc Tuminelli. The cast members remain some of my closest friends. I think for me, I love immersing myself in the world of a production, and getting into my groove with whatever part I play on stage.

Check out Part II of my interview with Rachel Resheff coming soon.