Anything Goes is one of those shows that never takes itself too seriously. It isn't afraid to get a little bawdy and bend the rules -- but it always comes out on top, full of class, champagne bubbles and loads of style.

In describing the show, I'm also describing the show's star. Rachel York is an actress whom I've admired for years. I bet dollars to donuts if she were working during the golden age of Broadway, she'd be a household name in the likes of Greta Garbo, Barbara Stanwyck and Rosalind Russell. A winning smile, comedic chops, a voice as comfortable belting out a Cole Porter showstopper as it is crooning a Sondheim ballad and legs for days, York is a star in every sense of the word. And as the evangelist-turned-nightclub-singer Reno Sweeney, York has landed a role that fits as snug as her gorgeous Martin Pakledina-designed gowns.

I was lucky enough to catch the 2011 Broadway revival, on which this national tour is based, starring the wholesome and eager-to-please Sutton Foster. While I enjoyed Foster (who's a better hoofer than York, but York fakes it damn well), she seemed to be working hard playing against type. York already has the glamour part down, and she plays with it by making her Reno a bawdy, wise-cracking affair.

In most cases when a star this bright leaves the stage, the show sags. Not here. In this first-rate national tour, the colorful supporting cast keeps all the balls in the air,which is essential when dealing with a musical comedy as madcap as this one (I won't even try to cover the plot, but let's just say it involves a trio of star-crossed lovers trapped on a London-bound cruise ship). As the droll gangster-in-hiding "Moonface" Martin, Fred Applegate takes the basic comedic rules of "faster! louder! funnier!" and throws them out the window -- and the payoff is huge. As his sexpot sidekick, Joyce Chittick turns sailor chasing into an art form. Ed Staudenmayer, as soggy Sir Evelyn Oakleigh, wins us over as he discovers the "Gypsy in Me."

A lively ensemble embeds Kathleen Marshall's workman-like choreography with personality (while Marshall is a skilled director, her choreography often relies on the same bag of tricks).

But I'm being picky. Anything Goes is a bawdy, brassy good time featuring a delicious leading lady performance. Do yourself a favor and see it. 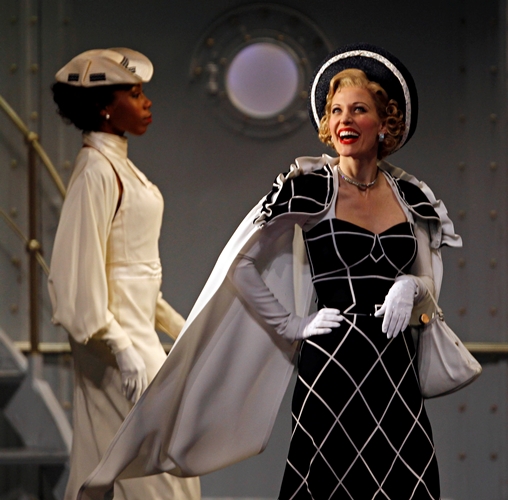 Rachel York is Reno Sweeney in "Anything Goes"

"Anything Goes" plays through May 5 at the Cadillac Palace Theatre. More info here >