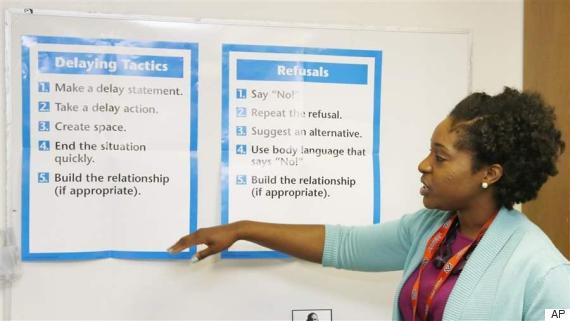 LaNita Harris of the Oklahoma City County Health Department explains two of the posters the department uses in its Teen Pregnancy Prevention program. Although teen pregnancy and birth rates have dropped the past two decades, states still face the reality that black and Latina teens are more than twice as likely as white teens to become pregnant.

It’s a problem once thought to be intractable, and yet pregnancy and birth rates for black and Latina teens have dropped precipitously in the past two decades—at a much faster clip than that of white teens.

Despite this, black and Latina girls are more than twice as likely as white girls to become pregnant before they leave adolescence.

This glass half-full, half-empty scenario is a dilemma that continues to confound states. The racial and ethnic disparities surrounding teen pregnancy are stubborn, often a cause and consequence of poverty and a complex array of societal factors. Teen pregnancies are usually unplanned and come with a steep price tag, costing U.S. taxpayers up to $28 billion a year, according to the Office of Adolescent Health, which is part of the U.S. Department of Health and Human Services.

Some states like Mississippi have found innovative ways to tackle the problem by targeting specific populations, while others like Kansas are serving up bills that make it more difficult for teens to access sex education, which is a critical component of preventing pregnancy in adolescence, according to advocates such as the National Campaign to Prevent Teen and Unplanned Pregnancy. 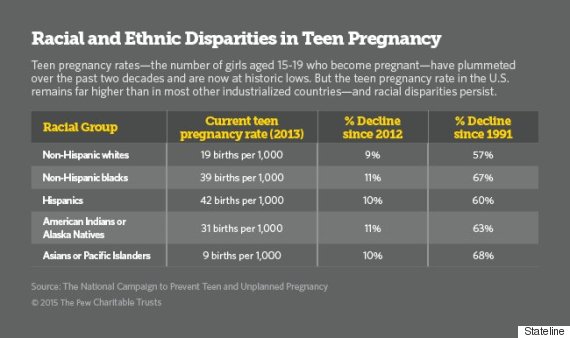 To truly solve the problem, these advocates argue, there needs to be a multipronged approach involving funding from the federal government and from the states, as well as intensive community outreach and culturally specific programming.

“You can correctly point to the extraordinary, off-the-charts success in reducing teen pregnancy and childbearing in the African-American and Latina communities,” said Bill Albert, chief program officer for the National Campaign. “But these rates remain far, far higher than among whites. And that needs our full and undivided attention. There’s a role for state and local efforts—and not all of it costs money.”

According to Kate Blackman, a research analyst in the health program at the National Conference of State Legislatures, “states do a lot to raise awareness. We’ve seen some reductions in teen pregnancy—when it’s been a priority.”

Over the past two decades, the teen pregnancy rate, defined as the number of girls per 1,000 girls aged 15-19 who become pregnant, has been steadily decreasing. Progress has been made in all 50 states and among all racial and ethnic groups, according to Albert.

A variety of factors contributed to the decline.

Since the 1990s, there has been an increased use of highly effective, low maintenance birth control methods like the IUD and contraceptive implants, according to Albert.

The Obama administration’s Teen Pregnancy Prevention Initiative, which awards $105 million in grants to programs tackling adolescent pregnancy, has been successful in helping reduce birth rates because it funds programs that have been proven to work, Albert said.

Above all, teens are having less sex for a variety of reasons, from the Great Recession to peer pressure to watching cautionary horror stories on reality TV. A 2014 study by economists at the University of Maryland and Wellesley College found that one-third of the drop in the teen birth rate between 2008 and 2011 could be attributed to teens watching shows like MTV’s “16 & Pregnant” and “Teen Mom.”

“We adults always talk about peer pressure as a negative thing, but it can be a force for good,” Albert said. “We know teenagers whose friends are having sex are more likely to have it for themselves. But now, there’s a growing social norm of not getting pregnant while you’re young.”

But when you look at actual rates, they demonstrate a stark reality: Girls of color are much more likely to become pregnant.

Poverty plays a big role in high teen birth rates, as does geography. Rural teens have higher rates of pregnancy than do urban and suburban teens. Southern states, which tend to be poorer and have the highest rates of HIV infections, also report the highest number of teen births. Education and access to contraceptives play a larger role in teen pregnancy rates than do cultural or religious differences, teen advocates suggest.

“When you look at these disparities, it has a lot more to do with a lack of opportunity than with the color of your skin,” Albert said.

Poor teens of color are less likely to have access to quality health care and contraceptive services, and are much more likely to live in neighborhoods where jobs and opportunities for advancement are scarce, according to Gail Wyatt, a clinical psychologist and sex researcher at UCLA.

Many teen girls having sex are being exploited by older men, Wyatt said. Many underprivileged girls face peer pressure to have sex early—sometimes egged on by girls who aren’t yet having sex themselves, she said.

Then, too, teen pregnancy is often cyclical, said Lee Warner, associate director for Science in the Division of Reproductive Health at the Centers for Disease Control and Prevention (CDC). “A lot of the kids having kids are the kids of teen parents themselves. It’s generational.” According to the National Campaign, the daughters of teen mothers are three times as likely to become teen mothers themselves.

Young disadvantaged women need to hear positive reasons about the benefits of avoiding early pregnancy, Albert said. “We haven’t done a good job as a nation about telling young people why we think it’s a good idea to delay pregnancy and parenthood,” he said. “I think sometimes these messages come off as anti-family and anti-baby rather than talking about when and under what circumstances it is good to start a family.”

For the past 15 years, the CDC has spearheaded programming that targets racial and ethnic disparities in teen pregnancy, according to Taleria Fuller, a health scientist in the CDC’s Division of Reproductive Health. The agency focuses on communities where there are high rates of teen pregnancies and birth, particularly among African-American and Latina youth, she said.

The CDC uses a five-pronged approach to address the problem, she said: enlisting community involvement; investing in programs that have been demonstrated to reduce teen pregnancy; increasing youth access to contraceptives and culturally oriented health care services; educating community leaders and parents, and raising awareness in diverse communities about the link between teen pregnancy and other social ills.

The CDC also funds programs tailored to different ethnic groups, like ¡Cuídate!, which means “Take care of yourself!,” and is targeted toward Latino youth for whom Spanish is usually their first language. The program consists of six one-hour classes among small groups of teens and incorporates role-playing, music and video games to educate youth about abstinence and condom use. The program emphasizes Latino values of family and specific gender roles in the community.

“You’ve got to have room for adaptation,” Fuller said. “Your group may be different from another group.”

In Mississippi, which has the second highest teen birth rate in the country, legislators last year passed a bill asking community colleges and universities to come up with a plan to target teen pregnancy on their campuses. Earlier this year, Gov. Phil Bryant, a Republican, proposed spending $1.2 million support to health clinics at the colleges.

“This was a pretty innovative legislative angle: ‘These people are coming to our campuses; let’s provide them with skills and not derail their goals,'” said the NCSL’s Blackman.

But not all states are taking that approach. In Kansas, legislators last month introduced a bill that would require schools to obtain written parental consent to teach sex education. Another bill would make teachers criminally liable for displaying some sex education materials. Education groups have lobbied strenuously against the bill, arguing that it would severely restrict the materials that teachers could use in the classroom.

In Indiana, meanwhile, a bill aimed at lowering teen pregnancy recently failed to make it out of legislative committee.

“We need a human sexuality education mandate in this country,” UCLA’s Wyatt said. “If we had a requirement that every kid by the time they’re 10 knows about human anatomy and where babies are made, we’d see a big reduction in teen pregnancy.”

1 / 46
<strong>Clara Barton</strong>, Founder Of The Red Cross
Clara Barton (born 1821, and died 1912) is best known for being the <a href="http://www.civilwar.org/education/history/biographies/clara-barton.html" target="_hplink">founder of the American Red Cross</a>. She also played a major role in caring for soldiers during the Civil War, where she nursed wounded soldiers and helped to search for missing soldiers, <a href="http://www.redcross.org/about-us/history/clara-barton" target="_hplink">creating the Bureau of Records of Missing Men of the Armies of the United States</a>, according to the Red Cross. Barton <a href="http://www.redcross.org/about-us/history/clara-barton" target="_hplink">founded the American Red Cross</a> -- initially called the American Association of the Red Cross -- in 1881, which has gone on to be a vital player in providing disaster relief around the country. -- <em>ALC</em>
Alamy