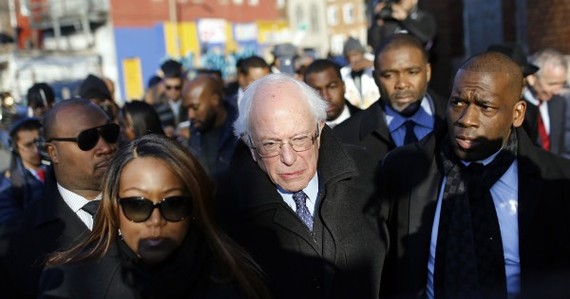 There have been a number of attacks against Bernie Sanders concerning his position on race, poverty, and his "ghetto" comments at the recent Democratic presidential debate with Hillary Clinton. People in mainstream and social media have claimed these remarks show that Sanders doesn't understand African Americans, "poor whites," or even poverty in the United States.

In short, Sanders stated that "white" Americans don't know what it's like to live like African Americans in U.S. ghettos. The statement was right on, but commentators quickly took it out of context.

Certainly, we need to critique candidates on their words, but we also need to judge politicians based on their actions and past policies. The Sander's campaign is built on creating economic equality for all people, and his platform and personal history include attacking institutional racial inequality as well.

People often miss that systematic racism is wrapped up tightly within economic inequality. There is no separating the two.

Tackling all inequality means targeting the fight against racism as well as combating the prison industrial complex and harmful economic policies (NAFTA, CAFTA, TPP). When those in the media say that these issues must be taken on separately, we must ask, to what purpose are those arguments made?

"What it's like to be living in a ghetto"

Clinton spoke about how several personal experiences working with African Americans helped motivate her stance against racial injustice. She promised "to tear down the barriers of systemic racism that are in the criminal justice system, in the employment system, in the education and health care system."

Sanders agreed with Clinton and shared similar experiences, including a recent conversation with young people in the Black Lives Matter (BLM) movement. Bernie relayed what one of the young women in the movement told him:

After relating the woman's words from the BLM movement, Sanders answered:

Cue the Twitterverse going wild. Bernie Sanders thinks all African Americans live in ghettos? He doesn't think "white people" know poverty? Some media outlets even grossly cut and truncated the quote to say, "When you're white... you don't know what it's like to be poor."

Sanders said none of these things, yet corporate media is not always interested in providing the proper context and people aren't always as discerning. (U.S. media also wasn't that interested in reporting on Monday that Sanders won 3/4 states over the weekend in the Democratic primary race.)

The point of the original question was to have each candidate explain a "racial blind spot." Sanders first gave an example of not realizing 20 years ago how much trouble an African American congressman and colleague of his had hailing cabs in Washington, D.C. He then moved to his "ghetto" comments, where Bernie stated: Euro-Americans don't know what it's like to experience both poverty and racist police brutality/bullying at the same time.

We need to talk more about the racism and extreme poverty that exists today in U.S. ghettos. Ghettos by general definition are urban spaces where those in power place an undesirable group of people, and this area of the city is reserved for that minority group. The definition dates back hundreds of years in Europe, where Christians separated Jewish people from the rest of the population.

In U.S. history, ghettos and their counterpart, barrios, are reserved respectively for African Americans and Latinos -- though similar Native American reservations are primarily located in rural areas. Yes, "white" Americans have and still do live in many low-income neighborhoods, some even in racialized ghettos, barrios, and reservations.

However, state, federal, and private institutions never created these places for Euro-Americans. Historically, European immigrants lived in concentrated ethnic enclaves, yet they were not ghettoized in the U.S. like people of color. The biggest difference is that Euro-Americans moved out of their neighborhoods, which means they were never permanently funneled into U.S. ghettos.

The very definition of ghetto is based on a space where class and race are directly connected through discriminatory mortgage lending, redlining, and other practices. This was the point Sanders needed to make clear, but perhaps felt was already known: the ghetto is a place primarily for low-income African Americans today.

The U.S. ghetto also has a symbiotic relationship with the penal system -- the two have become inextricably linked with each other. Ghettos feed prisons and prison turn people back into the ghetto.

Sanders addressed this in the debate as well, saying that as president he "would make sure that those people who left jail had the education and job training so they don't go back into the same environment which got them in jail in the first place."

Ex-felons often reoffend and return to prison because they're stigmatized and discriminated against in jobs as well as blocked from receiving financial assistance with housing, student loans, and other aid (no thanks to the 1994 Crime Bill and 1996 Welfare Act). This is all a part of what we call institutionalized or systematic racism.

As a "white male" Sanders has significant privilege, but let's not get the narrative twisted: Bernie has used that privilege to be on the right side of history for over the past 55 years.

Since the early 1960s, Sanders has spoken out against both racial and economic injustice. While at the University of Chicago, he was a chapter leader of CORE (Congress of Racial Equality) and SNCC (Student Non-Violent Coordinating Committee) after the groups merged.

While a student, Sanders stood against discriminatory student housing at his university. In the summer of 1963, Chicago police arrested Bernie for his civil rights activism as he worked with thousands of others against segregationist education policies in Chicago Public Schools. He chained himself to other protestors, including an African American woman, who can be seen alongside him during an act of civil disobedience.

Two weeks later, Sanders was at the 1963 March on Washington for Jobs and Freedom. Here, young Bernie heard Dr. Martin Luther King, Jr. speak on the issues of class and race going hand-in-hand, as the name of the march suggests.

Since then, Bernie has spoken out for the poor and people of color. Dr. Cornel West, an avowed Sanders supporter, says: "We need black working people, poor people, middle class people who care, to understand that. We can understand the black elite sometimes pulling back because Bernie is hard in terms of accountability of elites, no matter what color."

Most national politicians don't directly address the poor because it isn't politically advantageous (Obama has spoken about poverty at times, but Lyndon B. Johnson was the last President to declare a direct War on Poverty). When Sanders recently spoke on the "ghetto," he walked into a political minefield where "white" Americans followed with complaints that they were overlooked in terms of class and African Americans contended that they're not all poor -- both fair criticisms.

Still, Sanders answered the call to speak frankly on race while moving past the political focus on the middle class. Bernie's words and his life work have shown a solid understanding of the need to take on the two dangerously intertwined issues simultaneously.

If we are only willing to fight for the middle class, people of color will continually be left behind.

Without a doubt, Bernie Sanders and Hillary Clinton have the best understandings of U.S. racial injustices out of the viable candidates running for president. However, Sanders demonstrates that he understands institutional racism and class inequality are connected in ways that must be addressed together.

Mainstream media has been uneven in their coverage of Sanders, and even Clinton, compared to other candidates. Unfortunately, this will be an ongoing problem, just as Trump will continue to poll high as long as these same media outlets keep giving him free publicity for his asinine commentary.

While this message is brought to you by someone who supports Bernie Sanders, it is more importantly a message that warns we all need to be careful consumers of the media. We should not expect that mainstream media will report everything correctly, as they have their own biases and interests.

In other words, we should never expect that 6 corporations that control 90 percent of mass media would fairly treat a candidate who firmly stands up against corporate welfare and greed.

We also need to be aware of the social media we produce and reproduce. Everyone writing on the 2016 U.S. election is influenced by their position in society or positionality. Our race, class, sex, among other life conditions, all influence the policies and political candidates we choose to support.

We must push our political leaders to attack a variety of issues together, but let's be honest about our critiques and not mislead people with sound bites while hiding whom we're really stumping for and why we support them.