Unequal health care continues to be a serious problem for black Americans.

More than a decade after the Institute of Medicine issued a landmark report showing that minority patients were less likely to receive the same quality health care as white patients, racial and ethnic disparities continue to plague the U.S. health care system. That report, which was published in 2002, indicated that even when both groups had similar insurance or the same ability to pay for care, black patients received inferior treatment to white patients.

This still hold true, according to our investigation into dozens of studies about black health across multiple disciplines. More than any other single group, the black community is most likely to have negative health outcomes, including higher rates of breast and prostate cancer, high incidence of HIV/AIDS, higher rates of infant morality -- along with high rates of childhood obesity and asthma in young adults.

According to Karen M. Winkfield, a radiation oncologist and assistant professor in the department of radiation oncology at Harvard Medical School, racial disparities in health care and health outcomes exist across almost every single disease or condition.

"In terms of the disparities, it’s universal," she said. "There are disparities across almost every single disease entity." 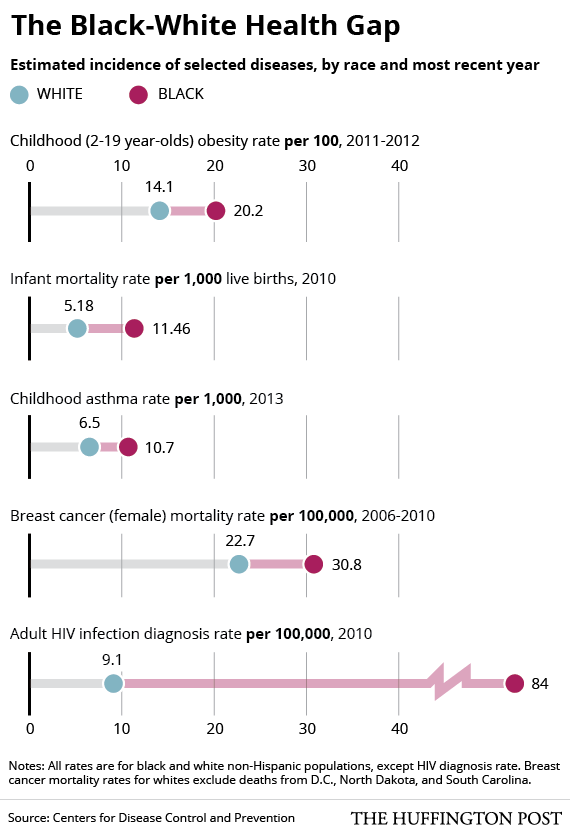 Socioeconomic inequality accounts for much of the difference. Twenty-seven percent of people living in poverty are black, and studies consistently show that the least educated and lowest income people are the most likely to be unhealthy.

"Financial status directly impacts health status," Winkfield said. "They are inseparable. That’s the problem in this country -- people make the assumption that people can just do. Well, you can’t. If you don’t have the resources, you’re not going to be able to care for your health in the appropriate way."

This is a Catch-22: People need education and information in order to make these good personal health decisions, two resources that economically disadvantaged individuals are less likely to have. Education is also a factor in making health changes on a community level. It takes education and political connections to effectively lobby local grocery stores to carry fresh fruits and vegetables, or fight to prohibit corner stores from selling tobacco to neighborhood youth.

But inequality alone doesn't account for the difference. Policy can address differences in access and income, but research finds that unconscious racism is far more insidious and harder to legislate against. Fully two-thirds of medical professionals display unconscious racial bias. And research has also shown that racial bias can lead to reduced trust between patients and their doctors, and causes black patients feel less respected by their doctors.

"Layered on top of those social class inequities are racial inequities," said Dr. M. Norman Oliver, director of the University of Virginia Center on Health Disparities. "While a poor, working-class white or a poor Appalachian white might have the same poor health standards as folks in inner-city Baltimore, the population attributable risk of being in that poor status is much higher in the African-American community. That’s a result of that racist discrimination being layered on top of the class inequities that we have."

Though the numbers are grim, there are efforts to close these gaps. One initiative outlined in a 2014 New England Journal of Medicine study proved that requiring hospitals to report quality of care reduced racial disparities in health outcomes between 2005 and 2010 in 17 categories, including heart attacks, heart failures and pneumonia. And the Affordable Care Act has started to narrow the health insurance disparity, with the number of uninsured blacks expected to drop from 20 percent to 11 percent by 2016.

These improvements, however, have limits. For individuals who didn't benefit from the ACA's expansion of Medicaid, and had to buy health insurance through the health care exchanges, there may be no increase in health care access at all, said Oliver. "It’s a little problematic in that most folks can’t afford anything other than the high-deductible plans," he said. "Even though they have insurance, it doesn’t necessarily increase their access, because they can’t pay for things out of pocket."

One way to combat discrepancies is to clearly identify them. In that spirit, we picked five disease areas representing both chronic and infectious conditions -- childhood obesity, infant mortality, childhood asthma, breast cancer and HIV infections -- to illuminate how much worse outcomes are for African-Americans in nearly every category of health:

Why is this happening? Socioeconomic factors including income, education, and occupation can mean fewer resources, less access to quality health care and worse health outcomes. In addition, life-saving clinical trials may be financially impossible for working-class women who can't afford to miss a shift. As it stands, only five percent of clinical trial participants are black. "The advancements in screening tools and treatment which occurred in the 1990s were largely available to white women, while black women, who were more likely to be uninsured, did not gain equal access to these life-saving technologies," Bijou Hunt, an epidemiologist at Mount Sinai Hospital in Chicago, told Reuters last year.

Why is this happening? Poverty underscores HIV transmissions, since limited access to health care can mean individuals are less likely to be educated about or practice safe sex, less likely to get tested for HIV, and may have less access to antiretroviral therapies than their higher-income counterparts. In addition, the disproportionally high incarceration rate among black men poses an infection risk for the black community. One in seven people with HIV has passed through a correctional facility, where recent reports show that rape and sex between inmates is commonplace.

Why is this happening? Devastatingly high infant mortality rates among people of color make it especially clear that not all groups have benefited equally from 20th-century medical advances. Factors such as poor maternal health, inadequate prenatal care, smoking during pregnancy, lack of education, infection, stress and racism may all contribute to infant mortality.

"We know that one of the leading causes of infant mortality among African-Americans is preterm birth," Michael Lu, an obstetrician-gynecologist and professor at the University of California at Los Angeles told McClatchy DC in 2007 when studies suggested stress may play a role in the long-stubborn mortality discrepancy. "We know that stress is an important risk factor, and it initiates the release of stress hormones leading to preterm birth and increase susceptibility for infection. The question is, do we think racial discrimination and racism is stressful?"

The answer to Lu's question is "yes." While existing peer-reviewed research on the psychological effects of racism on people of color is limited, psychologist Monnica Williams, a professor and director of the University of Louisville’s Center for Mental Health Disparities, believes there is a link between racism and post-traumatic stress disorder. "It’s a natural byproduct of the types of experiences that minorities have to deal with on a regular basis," she said in a New York Times interview in June. "My training and study has been on post-traumatic stress disorder for a long time, and the two look very much alike."

The research: Compared to white children, black children and adolescents are more likely to suffer from obesity, defined as having body-mass indices greater than 30. This is especially troubling because of the myriad long-term health problems associated with obesity, including coronary heart disease, high-blood pressure, stroke, Type 2 diabetes and cancer.

Why is this happening? Obesity is a tricky and somewhat circular issue. One possible contributing factor to childhood obesity among black children that they are less likely to be breastfed than white children. According to the World Health Organization, formula-fed infants tend to consume higher protein levels, which can lead to weight gain and obesity development later in life. Breast milk also contains important hormones that may contribute to healthy weight balance. Breastfeeding is not, however, always an issue of personal choice. That black women generally tend to make less money and be less well-educated are barriers "because you can't access jobs where you might have a maternity leave, or can negotiate a private space to pump, or feel you are able to nurse at work," Monique Sims-Harper, director of A More Excellent Way Health Improvement Organization and a spokeswoman for the California Breastfeeding Coalition, told the BBC.

Additional factors that can trigger obesity include the lack of access to health foods in low-income communities, limited opportunities for physical activity (people living in high-crime communities may be less likely to let their kids play outside, for example), and a lack of education about nutrition. Bringing the issue full circle, a higher weight is associated with lower earned income, at least among women.

The research: Black and Puerto Rican children are more likely to have asthma than any other groups. Moreover, black individuals of any age are three times more likely than white individuals to die from asthma.

Why is this happening? Living in poor-quality low-income housing, which could include lead paint and mold, is a likely asthma trigger, a condition that is not limited to city dwellers. African-American children living in Inner-city and rural low-income areas were found to have equally high asthma levels in a recent study published in the Journal of Allergy and Clinical Immunology.

While there may be a genetic component to asthma, poverty seems to be the overwhelming risk factor. As of 2013, almost a third of people living at the poverty level were black. Poverty can also contribute to other health behaviors that can cause or worsen asthma. According to NPR, "Second-hand smoke is also a risk for children, and poor people tend to smoke more. And people in poverty, no matter where they live, also experience day-to-day stress."

Over the next few months, The Huffington Post will shine a light on racial disparities in health outcomes and care as part of our series, Black Health Matters.