The economy is recovering, but not the bottom line for black Americans, according to new figures from the Pew Research Center.

The median wealth of black households dropped an astonishing 34 percent from 2010 to 2013, according to Pew's analysis of Federal Reserve data. That of white households grew slightly over the same period. 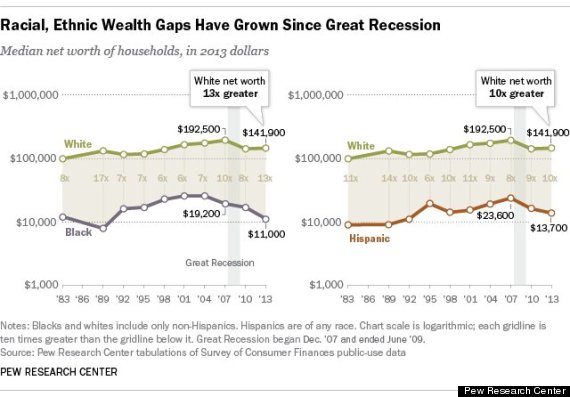 For many middle-class Americans, wealth is tied to the value of their homes. When the housing market crashed in 2007, the value of Americans' assets took a beating across racial groups. Yet in the recovery, blacks have not bounced back as well as whites.

Black homeownership rates in the U.S. have historically been lower than white homeownership rates for a variety of reasons, but primarily due to a long history of racist housing policies that legal reforms have not entirely erased. During the housing boom of the last decade, blacks were more likely to get stuck with high-cost subprime mortgage loans than whites. In the crash, blacks were more likely to lose their homes than whites.