Scientists have long known that experiencing racism is bad for your health. In fact, racial discrimination has been linked to depression, cardiovascular disease, high blood pressure, and the common cold among other health issues. But can it help account for the fact that African-American men have a life expectancy nearly five years shorter than their white counterparts?

Maybe so, as a new study suggests that racial discrimination actually accelerates aging at the cellular level.

In the study, 92 African-American men between 30 and 50 years of age answered questions about facing discrimination, such as at work, in stores, or from police. The men also completed a so-called implicit association test that measured their attitudes toward different racial groups.

The researchers then analyzed the men's DNA and looked specifically at the length of their telomeres. Those are the repetitive sequences of DNA that cap the ends of chromosomes to protect them from "fraying" -- like the tips on the ends of shoelaces.

Why telomeres? They shorten each time a cell divides, losing around 50 to 100 base pairs every year on average, and they shorten more rapidly when a person is under stress.

“Telomere length may be a better indicator of biological age, which can give us insight into variations in the cumulative ‘wear and tear’ of the organism net of chronological age,” Dr. Chai said in the statement. 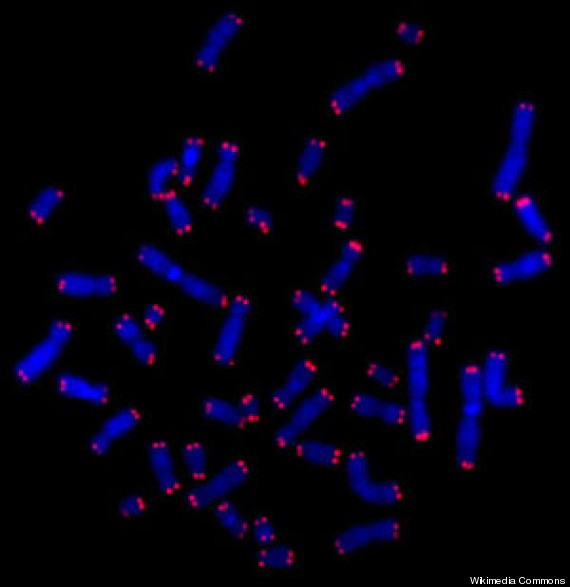 An electron micrograph showing telomeres in red. Telomeres are repetitive sequences of DNA capping the ends of chromosomes. Shorter telomere length is associated with increased risk of premature death and chronic disease such as diabetes, dementia, stroke and heart disease.

The researchers found that the men who had experienced greater racial discrimination and also displayed a stronger unconscious bias against their own racial group had the shortest telomeres. But no link was found between racism and telomere length in the African-American men who had pro-black attitudes.

"African American men who have more positive views of their racial group may be buffered from the negative impact of racial discrimination," Dr. Chae said in the statement. "In contrast, those who have internalized an anti-black bias may be less able to cope with racist experiences, which may result in greater stress and shorter telomeres."

The researchers noted that their findings may shed light on the detrimental health effects of policies like "stop-and-frisk" and others that may lead to racial profiling.

"While contemporary forms of racial discrimination may not have an overt racist component, studies consistently underscore a pattern of differential treatment of African Americans across social domains," Dr. Chae told The Huffington Post in an email.

"There need to be efforts to address policies that are discriminatory and also greater enforcement of existing protective legislation," he said, "this includes practices that are subtle and those which may not necessarily be illegal (e.g., receiving poorer service at restaurants, being followed in stores)."

The study was published in the American Journal of Preventive Medicine.