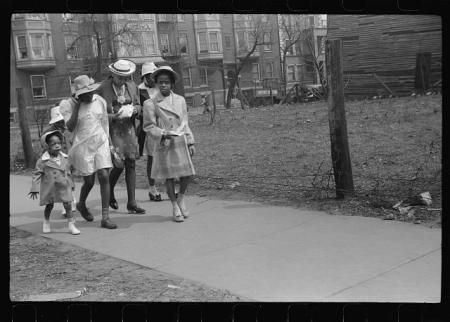 Watching Tarantino's "Django Unchained" for the first time in the wake of several black church fires last month probably affected my viewing of the movie. The whole time, I was looking for the faith element. Not because, as a history buff, I was actually expecting it from Tarantino-this is a director famous for his anachronistic tendencies, after all-but because I needed it. There's still no confirmation that any of these churches were targets of hate crimes, but the proximity of these burnings to the Charleston massacre is chilling. Churches are supposed to be a refuge.

In times of crisis throughout history, disenfranchised people in particular have flocked to faith. It can be hard for white atheists, like Tarantino, to empathize with that. That's not a judgment, just an observation, speaking as a Salvadoran-Scottish-American with her own winding spiritual journey. I ride no High Horse. Rather, I try to ride an Empathy Horse.

One thing I've worked hard to understand is why some people practice their religion so fervently, interpreting it so literally, even when it seems to defy logic. The older I get and the more personal challenges I face, the better I understand and respect the need for faith. I may not always have it, but I always want it. When your people have been repeatedly abused and persecuted, such as in the case of African-Americans, practicing your faith seems that much more warranted.

As Sarah Kaplan and Justin Moyer pointed out in their July 1st Washington Post article, "Why racists target black churches," historically there have been many incidents of white supremacists burning black houses of worship "because they have always remained a symbol of hope in the darkness of American racism and a source of leadership, political and religious, in the African American community." According to the article "The Black Church, A Brief History" by the African American Registry, during the days of slavery, "Religion offered a means of catharsis...Africans retained their faith in God and found refuge in their churches."

READ: The Grass is More Racist on the Other Side of the Facebook Wall

While "Django Unchained" depicts faith as belief in a German folktale, it doesn't show the kind of faith prevalent at the time: slaves worshiping at black churches and singing so-called negro spirituals about salvation as a way of coping with the atrocities of slavery. While literal, legalized slavery has been abolished, people other than able-bodied, cis-gendered, upper-class, white males still live in chains. These chains are of different weights and thicknesses, varying from demographic to demographic, but they are chains nonetheless. For some people, the only way to endure those chains is through faith.

Here's a more personal observation: When I was working on my photo-essay project, Mixteco/RVA, I concentrated on a group of Mexican Indians living and worshiping in Richmond, Virginia. The Mixtecs are largely disconnected from the rest of Richmond for linguistic, cultural, and economic reasons. Their native language is Mixtec and they speak Spanish to varying degrees of fluency. While some of the adult men speak limited English (what's necessary for their construction and factory jobs), it's rare for women to speak the language because their culture keeps them at home. Most of the low-income community lives in a trailer park in a lonely part of town.

The Mixtecs are ostracized by Richmond's Anglo and Hispanic communities, unwelcome seemingly everywhere but their Catholic parish. There, they go to Mass, take English and Spanish classes, and receive assistance with legal paperwork. For many of them, it seems that faith is what makes their lives tolerable in a place where their "Indianness" is not widely accepted.

After Ferguson, after Baltimore, and after Charleston; after a white NAACP president was caught posing as a black woman; after the Christian Right crying out against the legalization of gay marriage; after all the bad news, it can be hard to see anything but hate and self-interest. That's one of the reasons why many people need faith-in something, in anything-for the sake of hope for their community.

I hope that, even with shootings and fires, black Christians can continue to see their churches as places of refuge, not terror and hate, and that people who do not observe their faith in the same way can respect the need for such refuge in dark times. Churches are symbols of endurance. May they endure.