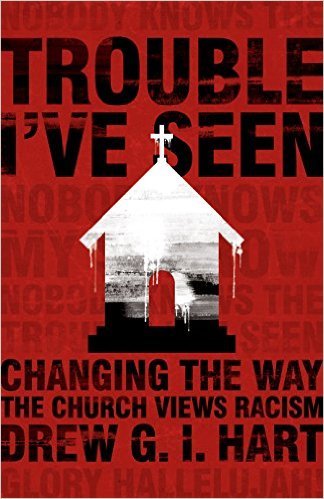 If there was any topic in 2015 that captured my imagination and challenged me to my core, it was the state of race relations in the US, Canada and abroad. Sadly, as a Christian, I kept finding that many white Christian leaders were dismissing, minimizing and even out-right denying the realities of the problems we faced and the responsibility we have to address these issues. Thankfully, through many others, I have been able to find hope.

One such person is someone I am lucky enough call friend- at least in our many overlapping connections online, is Drew Hart. Drew is a writer, speaker, and PhD candidate in theology and ethics with ten years of pastoral ministry experience. His undergraduate work was in biblical studies at Messiah College in Grantham, PA, upon which he immediately joined the pastoral team of Harrisburg Brethren in Christ Church, a racially diverse and urban Anabaptist community committed to racial reconciliation. After almost 4 years of pastoral ministry Drew returned to Philadelphia in pursuit of a Masters of Divinity degree with an urban concentration at Biblical Seminary. He served as an elder on the pastoral team at Montco Bible Fellowship, a predominantly African American multi-ethnic congregation, for seven years until transitioning towards more academic teaching and writing as a PhD candidate at Lutheran Theological Seminary at Philadelphia.

Drew has a new book called "Trouble I've Seen: Changing the Way the Church Views Racism" (Herald Pres). I had the privilege of reading an advanced copy of the book (via Netgalley with no expectation of a review, positive or otherwise). I found the book to be helpful, challenging and much needed. However, rather than a review by me, I wanted to get the goods from Drew directly, so we connected for any interview. I hope you find it helpful and immediately order the book.

Jamie Arpin-Ricci: Tell us why you wrote this book? What uniquely qualifies you to address this? Why now?

Drew Hart: Yeah, well I guess I should explain first that I didn't initially intend to be writing this book. At least not at the time that I did. As a PhD candidate I was repeatedly advised by people to put aside these other "distractions," because other opportunities would always come. And I was in the midst of working on my comprehensive exams and my dissertation proposal when I decided to write the book. Michael Brown had just been executed on the street and the Ferguson rebellion had erupted. The Black Lives Matter movement was building momentum and I found repeatedly found myself hitting the streets to join the protests when I academically my task at hand should have had me exclusively in the library. And in the midst of all of this unfolding, I watched and saw how many white Christians were missing an opportunity to stand for justice once again, similarly to how white churches frequently were apathetic or against the southern freedom movement of the 1950s and 60s.

Likewise, many black churches have become so middle class that they have cut their everyday lives off from poor black communities. This division has produced a mix of responses to the Black Lives Matter from a few black leaders early on, including critique at the different methods being used, and especially that the movement lacked leadership (which isn't true, it is leaderful) that didn't reflect the way previous generations had done it, as well as an over emphasis on looking "respectable" to the white dominant culture. My ten years of pastoral experience began to bubble over, because I knew that the Church needed an intervention. We needed to think more theologically about race, as well as gain a thicker grasp of the social realities and meaning of race in our society in the 21st century. And it just so happened that I study theological ethics, anti-racism studies, have pastoral experience and sensitivities, and have been working at this in the church and local community for the past ten years, which collectively prepared me to write on this very serious subject.

JAR: The subtitle is "Changing the Way the Church Views Racism". What needs changing? Are there well intentioned views in the church that need to be changed?

DH: So, yeah, like I was saying, an intervention was needed. Most specifically, we need to move from a thin definition of race to a thick one, and then we need to think about how Jesus matters in all of this. Traditionally in dominant culture, racism is thought of primarily as individual prejudice or hatred from one person to another. This is the most prevalent understanding of racism in our society today and it is also reflected in many English dictionaries. I often say that the English dictionary is a mirror into how we use language, but it isn't always necessarily the best way to use the language.

For example, since we use "google" as a verb, or because "selfie" has become popular language, you can see that reflected in English dictionaries. Similarly, how we commonly talk about racism is also reflected in many of our dictionaries. But there is a thicker definition and way of understanding racism than merely as racial prejudice and hatred. If one were to turn to the sociology department, and particularly critical race studies, one would find a much more comprehensive understanding of racism that takes into consideration the widespread racial patterns in society, as well as with a view towards how race and racism developed and grew in western society.

That broader and thicker understanding of racism, and particularly the significance of racial hierarchy that unconsciously plagues our everyday lives is something we have yet to fully grasp and work through in the Church. Nor have we understood the theological work that the Church did to create racism as it exists today. Once we understand those problems then we are truly ready to seek and find the significance of Jesus' birth, life, teachings, death, and resurrection in relation to our racialized society. Those are the two big issues I try to address in Trouble I've Seen.

JAR: Some people want to articulate racial reconciliation as seeking for all parties to be able to see the perspective of the other. Why is this inadequate? What's the alternative?

DH: What people do not consider, when we approach the racial realities of our society as though we merely need to do cultural exchange programs with one another, is the reality that racism has never been solely about bridging a social and cultural gap between our groups. There is a need for some reconciliation work, but the root cause for such divisions is primarily rooted in the racial hierarchy that is essential to racial logics in the west. Since the "great" enlightenment thinkers of the West, like Immanuel Kant, began trying to categorize humanity it has always meant hierarchy. People groups were ranked against white aesthetics and values as being either more or less superior or inferior. And to no surprise they ranked themselves and the rest of Europeans as being superior in beauty, in intelligence, in values, and culture.

Through that Eurocentric bias they also consistently claimed that Africans were at the bottom of the racial hierarchy. Other people groups were also inferior to white people in varying degrees from their perspective. And they actually believed that these categories reflected different kinds of humanity. That is race was biological and scientific in their mind. Contemporary sociologists and scientists have long debunked this racist ideology and have insisted that there is only one human race, and as such, the differences between us are much more minor and arbitrary than we realize. That is also basic biblical teaching. Instead, race is in fact primarily an arbitrary social construct that white people developed over time to legitimize conquest, enslavement, and commodification of people's bodies, lands, and resources.

If we are going to address racism today, it will require more than trying to bridge the divide. What is needed is for us to actually interrogate the subtle and unconscious racial hierarchy that has socialized our minds merely from existing in a society that has had 400 years of white supremacy in this land. The Black Lives Matter movement is actually a creative attempt to speak to this very problem. It is responding to the centuries of conditioning our society has gone through that has devalued everything black, including black life, even if that isn't our overt intention or our desire. Our minds need healing and deliverance just as much as our society does.

JAR: What other resources and/or steps would suggest for communities seeking justice?

DH: Some of the steps I recommend include joining the struggle for racial justice. Because there is deliverance in that work since Jesus is especially and uniquely present among vulnerable people in society. People also need to change who they primarily listen and learn from. Most people's lives are racially controlled and they don't even know it. If most people were to look at their book shelves they would find that it is overwhelming and disproportionately white and male. Very few people do not fall into this camp. It is just one example among many in which whiteness is overvalued to the exclusion of other people groups. Few people see black and brown people as bearers of wisdom worthy enough for them to actually seek them out regularly. In church pulpits, Christian conferences, and in our social circles, we should be examining what voices are influencing us, and which ones are lacking. I have many more suggestions in the book, but those two points are a good start.

JAR: Was there anything you hoped would be in the book but did not make it?

DH: Not really. I mean, there is always more that could be included in a book of this nature. I certainly could have written more on a variety of subjects. Some of the topics I addressed also could have been expanded into chapters of their own. However, I am good with the state of the book as it is. We can't say everything. Our work is never complete. We are all in process. Trouble I've Seen, however, does offer a mix of topics that I believe will resource the church well to be more competent concerning racism in the 21st century as well as offer some very practical and concrete steps for churches to use as they get going on the journey.

JAR: It certainly is a book that receives my full endorsement. Thanks, Drew.

Author of "Vulnerable Faith" & "The Cost of Community"