“He’s certainly not racist, and used to have a black boyfriend.”

Such was the outdated defense of Norwegian provocteur Bjarne Melgaard, whose polyvinyl sculpture of a contorted black woman under a chair has sparked a firestorm of criticism this week. Perch well-known art patron Dasha Zhukova on the sculpture, and it becomes the center of one of the most infamous portraits of the art world, and a heated debate over what's abhorrent, what's art and what's both. 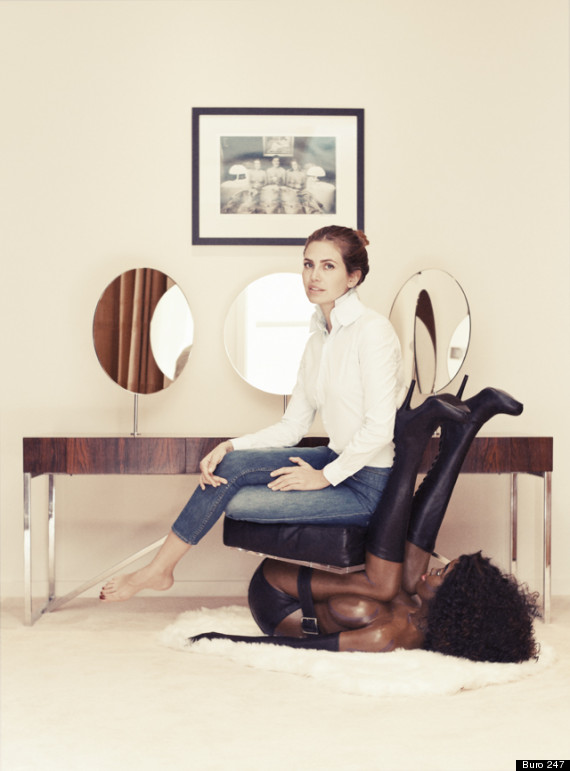 The photograph, pictured above, appeared online this Monday on the Russian fashion website Buro 24/7. Almost immediately, the hashtag #racistchair was born on Twitter.

Catching up with the #racistchair Twitterstorm. Am at a loss as to how this isn't racist. http://t.co/NkBEBAcmQM

the modern art world and russian socialites really do deserve one another #racistchair http://t.co/RfCUp0j9LF

The photograph prompts a number of baffling questions: Why a chair in the form of a black woman in S&M gear? Why seat the white girlfriend of a mega-millionaire on said chair? And why on earth unveil a photograph of all this to the Internet on Martin Luther King Day?

Official statements from Zhukova and Buro 24/7 don't address any of these questions, beyond a tepid insistence that they were trying to comment on racism. And while gallerist Steven Pollock, a friend of Melgaard, gave the above defense to the Evening Standard, citing the artist's previous relationship with a black man, Melgaard, meanwhile, issued a profoundly unapologetic statement on Thursday. He insisted, bizarrely, that the real crisis at hand is global warming. "We applaud both the sitter and the seated," reads one memorable line. (A request for an interview with Melgaard went unanswered.)

That Buro 24/7 editors swapped out the original photo for one that still features Zhukova propping herself against the model’s legs seems to indicate they missed the source of the outrage.

Presuming this is not a publicity stunt, are the art world’s elite really so naive that they couldn’t see this one coming? Using racist imagery as commentary on racism, on MLK Day -- what were they thinking?

Kenya Robinson, a New York-based performance artist whose work explores how social cues affect behavior, has a theory as to how the photograph came to be: this was “code-switching” in action, she offered in a phone interview. The popular term describes how we change everything from our accent to the way we move, depending on our own race and that of whomever's around.

Let us imagine for a moment the offices of entities like Zhukova’s Garage Magazine, or Buro 24/7 -- also helmed by a posh Muscovite. “The conversation they’re having in private about the picture is different from what they’re saying in public,” Robinson speculates. To presume that such an image would go over well in a magazine with global readership is itself “an expression of privilege,” she points out.

Kalup Linzy, a Brooklyn-based artist whose work explores identity (rooted in his own, as a gay black man), cites a different culprit. He knows Zhukova professionally, having crossed paths with her at parties, and exhibited at her Moscow gallery, also called the Garage. He believes she’s an “advocate” of the arts, but that the image-driven nature of the Internet failed her in the recent controversy.

Just as it’s fallacious to judge the artistic merit of Melgaard’s chair without seeing the “show it came out of,” the photograph might read differently as part of an editorial package, Linzy says, rather than as an unmoored image confronting us online. "Context is everything," he says.

Yet even in context, the message feels half-baked. There is the chair itself, which no one can agree on. Melgaard’s is an updated version of a 1969 sculpture by the British pop artist Allen Jones, which depicts a white woman under the seat. At The Guardian, critic Jonathan Jones suggests that the race of the original subject needed to be transformed in order to preserve the piece’s shock value today.

Others point out that Melgaard has a history of "paying lip service" to racial issues with his work. "He might be attempting to confront the act of fetishism that is often involved in the gendered racialisation of black bodies," writes Hana Riaz, also at The Guardian, "but he does so by using black women's bodies as collateral."

And debasing a black woman isn’t shocking, even in a gallery setting, argues Robinson, who is herself black. “It’s boring," she said. "We see those images everywhere, all the time.”

"That,” Robinson says, “would be truly shocking.”